“Recently, Senator Ted Cruz sat down with over 100 pastors and faith leaders to talk about how his Christian faith has shaped his worldview and how it would guide his decision-making as the next President of the United States. This short 18-minute documentary – Cruz Faith In Action — tells the story of how Ted Cruz came to be the man and leader he is today beginning with his father’s acceptance of Christ. You will hear directly from Rafael Cruz, Ted’s father, along with Pastor Gaylon Wiley, the man who led Rafael to Christ and then baptized Ted when he came to Christ. Senator Cruz then recounts how his Christian faith impacted him, his family, and shaped his conservative Biblical views. He also provides us with a refreshing reassurance about how his Christian beliefs and principles will guide him as President – from the appointment of Supreme Court Justices to defense of religious liberties.

We hope you will take a just a few minutes to watch this insightful view into the man who may be our next President. If it blesses you, we hope you will share it with others.” Welcome to the Watcher’s Council, a blogging group consisting of some of the most incisive blogs in the ‘sphere and the longest running group of its kind in existence. Every week, the members nominate two posts each, one written by themselves and one written by someone from outside the group for consideration by the whole Council.Then we vote on the best two posts, with the results appearing on Friday morning.

We regret to announce the departure of our friend Brent of The Right Planet, who resigned his seat on the Council and is taking a hiatus from writing to concentrate on other matters. We all wish him well and will miss him, although we look forward to him continuing to be a valued part of the Council community.

That also means that there is now a vacant seat on the Watcher’s Council. Interested parties should leave their site names and contact info (which of course won’t be published) in the comments section.

To bring something to my attention, simply head over to Joshuapundit and post the title and a link to the piece you want considered along with an email address (mandatory, but of course it won’t be published) in the comments section no later than Monday 6 PM PST in order to be considered for our honorable mention category. Then return the favor by creating a post on your site linking to the Watcher’s Council contest for the week when it comes out on Wednesday morning A Washington, DC attorney who has worked closely with presidential candidate Ted Cruz wrote a detailed article about his personal experience with the man seeking the republican nomination for president.

Theodore A. Gebhard worked with Ted Cruz “as a colleague at the Federal Trade Commission from-2001 until he left the commission to return to Texas in 2003.”

In this capacity, I was able to observe Ted’s professional skills, his personal characteristics, and, significantly, his commitment to constitutionalism, the rule of law, and free-market economics. These personal observations impel me to conclude not only that Ted possesses the qualifications to be president in terms of intellect, temperament, and knowledge of the issues facing the country; but even more importantly, that he is uniquely the right person to lead America at this time in its history.

As a tribute to his intellect Gebhard noted that although Cruz has no experience in the antitrust field, he “made himself into a superb antitrust lawyer and policy thinker.” Gebhard writes:

“Observing this feat at first hand left me in awe of Ted’s superior intellect. He is surely one of smartest persons I have ever known.”

Gebhard goes much deeper into his experience with Cruz, and ultimately observes:

“…it is clear that Ted Cruz is superior to all other candidates respecting his understanding of and commitment to America’s founding constitutional order, including federalism, the separation of powers, and the protection of individual liberty against government coercion.” 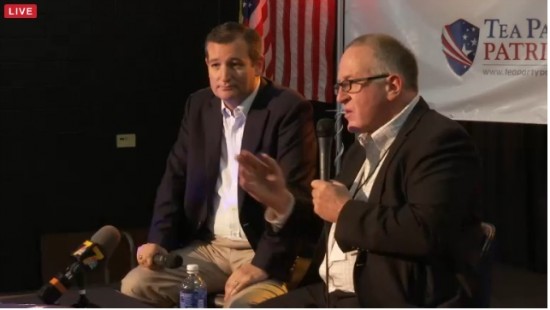 Folks, my political activism is not rooted in winning elections at all cost. It is about preserving who I grew up thinking we were as a country; my corny love for my country, belief that good triumphs over evil and my sense of right and wrong. I know. I know. I sound like a bad Frank Capra movie. However, I will not apologize for who I am.

Numerous times, I have shared that my dad was among a handful of blacks who broke the color barrier becoming Baltimore City firefighters in the early 1950s. Despite humiliating, racist and unfair work conditions, Dad won Firefighter of the Year two times. Well I am sorry folks, but that made a huge impression on me. All my dad wanted was an opportunity to compete for the job; no lowered standards or special concessions due to his skin color. Dad’s example taught me not to run around thinking everyone owes me something.

Striving for excellence and doing things God’s way won Dad the respect of his white fellow firefighters who once resented him. One of Dad’s most vehement adversaries risked his life, going back into a burning building and saved Dad’s life. The incident birthed a lifelong friendship between the two men.

Employers hire employees to benefit their business. Period. The more you benefit my business via education and heightened skills, the more valuable you are to me, the more I increase your pay to keep you. Such reasoning is not evil or unfair. And yet, today in America, unskilled workers are demanding a starting hourly wage enough to raise a family with flat-screen TVs and cell phones. This mindset is arrogant, wrong and actually cost jobs when implemented. http://onforb.es/1OLnq2Z I do not care that some folks do not like me saying this. Demanding a minimum wage that is not rooted in economic sense reflects the new entitlement mindset; a deterioration of who we are as a country.

I also have a huge problem with people trashing achievers and thinking that they are entitled to what others have worked for. This mindset troubles me to my core. When you read the autobiographies of many achievers, the common thread is they paid a great price to become successful. While others were dating and partying, future achievers where studying, working long hours, two and three jobs, sacrificing relationships, risking and often losing their life savings. Then, when an entrepreneur finally makes it, everyone has their hand out demanding “their” portion; claiming the achiever is the beneficiary of white or some other absurd privilege. It turns my stomach folks. The owner of a small meat processing company told me his employees’ salaries were higher than his for the first ten years.

At my local gym, the dozen or so televisions in front of the aerobic exercise machines illustrates the relentless promotion of America’s cultural rot; everything from sexual deviancy to lie filled liberal bias news reporting and people celebrated for behaving badly.

Folks, I am so sick of various groups of Americans running to microphones to claim their victim status. It is so beneath the legacy of our founders. What has happened to backbone, self-reliance and true grit. If I hear one more wimpy millennial whine about not feeling “safe”, I will barf.

Every Oscar season, black actors now demand that black films, producers and actors receive Oscar nominations or Hollywood will be accused of racism. In essence, held hostage. Thus, mediocre black movies and performances must be awarded or else. http://dailym.ai/1RUlQSP Well Hollywood, you created this monster, relentlessly promoting the narrative that America is a hellhole of racism. Your chickens have come home to roost.

As I said folks, my political activism is all about restoring and preserving who we are as a people, a great nation.

Planned Parenthood does a little dance every time they score an intact dead baby head because it can be sold at a premium price. http://bit.ly/1nDAqAU And yet, politicians kiss the baby killers’ derrieres and fund them annually to the tune of $500 million for political purposes. Who and what are we becoming folks?

These are the reasons why I disagree with those who say the social issues do not matter. “Let’s just elect a candidate who will get our economy in order and seal our border; someone who will compromise, negotiate and punt the social stuff.” Building on a foundation of the economy and border security alone is like building on sand. It “ain’t” enough folks.

Here I go sounding corny again. America is exceptional because it was founded/built on the rock (God) and the extraordinary unique idea of individual freedom and liberty. Government cannot tell you what to say, think and how to worship. And yet, such infringements are happening more and more in America today. http://bit.ly/1RZczZC We are losing our country and our morals and far too many Americans do not see it.

It is crucial that we elect a leader who is rooted in the Constitution and faith in God, just like our founding fathers. That presidential candidate is Ted Cruz. http://bit.ly/1SBy8yZ