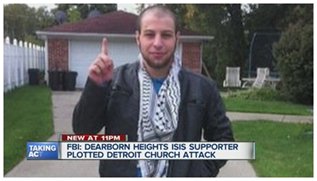 But, a closer examination is in order. In text messages to the undercover FBI agent, Abu-Rayyan’s said,

“Shayton (Satan) is talking to me. He’s in my head. He tells me ‘I’m your friend. … I’m your brother.’ He has a deep voice like me, ‘Let’s have some fun and hurt people’. He talks to me every night. He tells me to burn people alive, tie them up, cut out their tongues….”

So, where do these crazy and violent ideas come from? Right out of the Quran. Unbelievable, right? Is not Islam the religion of peace? Actually these grotesque images have been seared in this young man’s mind in the study of Islam and learning about the prophet’s life.

These images of torture and worse are descriptions of the famous “night ride of Muhammed” when he rode the half woman, half horse named Barack on his visits to Heaven and Hell in the very beginnings of Islam. 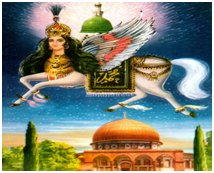 Artists have captured the imagery of that transformational night ride. 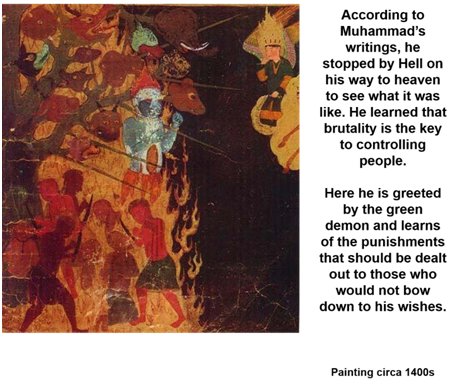 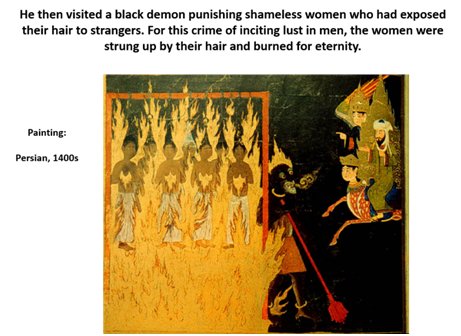 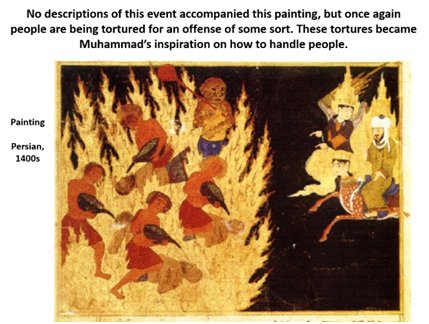 When we have encountered these radicalized Muslims in the past, there is often a connection to an imam at the local mosque. There is often a connection to websites extolling the glamorous life of the infidel-fighting warrior, and there is usually a photo or two of the young Jihadi posing with a menacing weapon, holding up a Quran and his index finger in an ISIS salute. 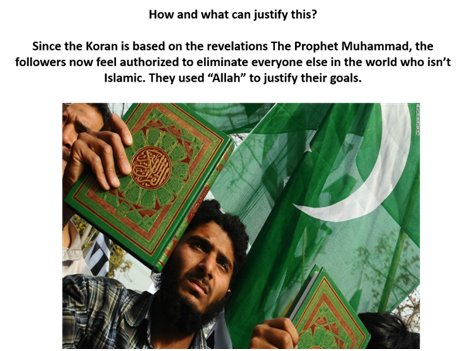 The ever-present arm of the Muslim Brotherhood, the Council on American Islamic Relations (CAIR) claims that Abu-Rayyan may have been just showing off. This is difficult to take from the organization who Founder Omar Ahmed openly states there will ultimately be no non-Muslims on earth. 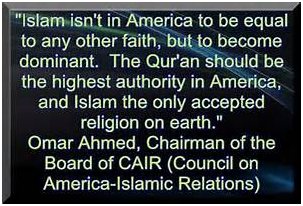 Now that Abu-Rayyan is on the radar let us make sure that we never minimize the magnitude of the threat someone like him presents to society. Let us stop calling attacks like this “lone wolves” and let us stop pretending they are rare and pose no legitimate threat. All the military strategy and command direction is right there in the Quran which acts as a reliable instruction manual.

Sura 5:33 Those who wage war against God and his messenger and strive to  spread corruption in the land should be punished by death, crucifixion, and the amputation of an alternate hand and foot or banishment from the land…

It is time to get serious and recognize the threats posed by people we have welcomed into our midst. Khalil Abu-Rayyan’s father was a Palestinian refugee. Khalil, the eldest of six, was born in the US. He graduated from high school and had some credits from community college and a job in the family’s pizza shop.

All American kid, Right? Not according to Assistant US Attorney Ronald Waterstreet who said Abu-Rayyan wanted to shoot, stab, choke people “skin them like sheep, even set them on fire”, a far cry from the description of his defense attorney who characterized him as part of a “family of peaceful Islamic worshippers.”

Actions speak louder than words. We must protect ourselves from the threat that Islam presents, particularly within the generations of US citizens here from birth like Abu-Rayyan.

It seems like these violent Jihadis are picking up the pace. An eyewitness described the actions of Mohammed Barry, the Somali machete-wielding attacker who repeatedly slashed diners at an Ohio restaurant,

“He came to each table and just started hitting them. There were tables and chairs overturned, there was a man on the floor bleeding, there was blood on the floor.” 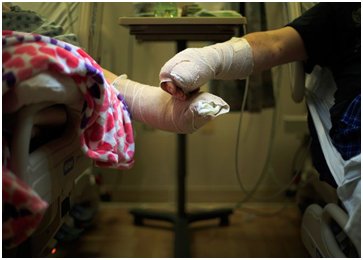 How many more are lurking in the shadows, just waiting to make their move. When are we going to take an unvarnished look at what is causing this radicalizing danger? When are we going to wake up and protect ourselves before we have invited all the problems that we see in Europe to take up residence in our own backyard? When is enough, enough?