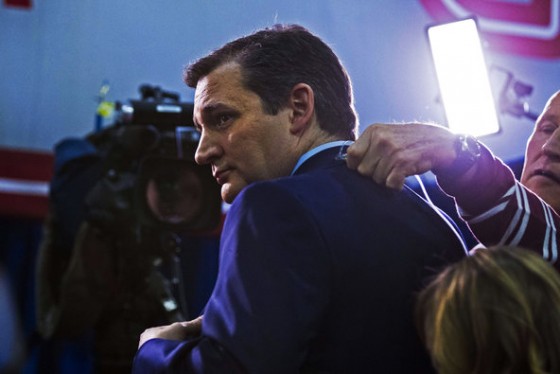 What has infuriated me on numerous occasions is patriot’s pattern of whining about sending politicians to Washington who betray us. And yet, when someone like Cruz keeps his word and the left launches a shock-and-awe campaign to destroy him, we run for the tall grass; distancing ourselves from him; joining the left in branding him toxic, extreme, polarizing and un-electable. That turns my stomach folks.

Leftist pundits say voters are angry because the GOP has opposed Obama for seven years. Hogwash! Voters are angry because no one has stopped our spoiled-brat president from destroying the world’s greatest health care system; allowing terrorists to kill Americans; making a deal which betrayed our ally and endangers Americans http://bit.ly/1QLGBKe; killing jobs with outrageous government overreaching regulations. http://nws.mx/1pnStw3 Americans would be idiots not to be POed. Only a levelheaded, iron back-boned conservative like Cruz can and will begin to clean up Obama’s mess.

At the beginning of the campaign season, like you, I enjoyed Trump upsetting the political correctness apple-cart. While I did not necessarily agree with everything Trump said, I felt empowered by him giving the MSM the finger and getting away with it. Recent liberal statements and the exposure of his history tells us Trump is not the one we have been waiting and praying for. http://bit.ly/1SiqRDM

For five years, Cruz has been a lone warrior, fighting for We the People. Ted Cruz is “The One.”

Rubio and Dr Carson have desperately and unsuccessfully embraced tactics beneath them to stay viable. Kasich is channeling Rodney King as the “can’t we all just get along” candidate – not resonating.

Now that the political dust has begun to settle, Cruz has emerged; clearly standing alone as the presidential statesman who possesses the right stuff.

Our Conservative Campaign Committee team, my wife Mary and I have been traveling state-to-state campaigning; waving signs on street corners and organizing phone-from-home initiatives for Cruz. We are elated that our efforts have paid-off.

Next stop for us is Louisiana and then on to Mississippi. Mary and I will not to be home in Florida to pet our rescued greyhound Sammy for a while. I think our pet-sitter is stealing Sammy’s affection.

Anyway, let’s keep this momentum going folks. Though I have said this before, it bears repeating.

Joseph de Maistre wrote, “Every nation gets the government it deserves.”

If we pass on this extremely rare opportunity to put a Reagan conservative whom God has prepared for such a time as this into our White House, we will receive the government we deserve.

Please, please, please continue doing everything you can to put Ted Cruz, the last hope for America, into the Oval Office.