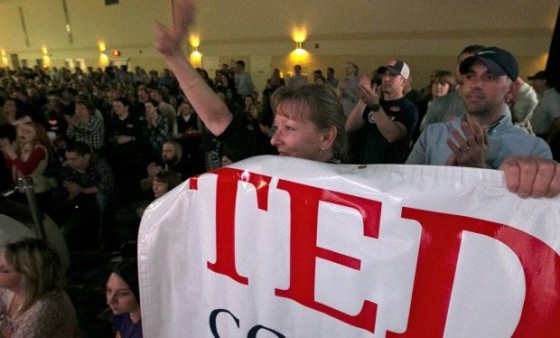 A local pastor opened the rally with a prayer, ending it with, “In Jesus name, Amen.” Folks, that is becoming unheard of in today’s America. My wife Mary noticed that when the audience said the pledge of allegiance, four kids around 9 and younger placed their hands over their hearts and knew all the words.

Duck Dynasty’s Phil Robertson took to the stage, placed his Bible on the podium and spoke boldly regarding his faith and the cultural rot that is destroying our country. Robertson cited that according to the CDC over 100 million Americans have sexually transmitted diseases. http://bit.ly/1QAYxId

Folks, I realized that even I have been trained by the Left regarding what Christians are allowed to say publicly. Hearing Phil talk so freely about old-fashion principles and values with clear boundaries of right and wrong was almost shocking. It heightened my respect for Ted Cruz for having Phil as his opening act. I thought, surely the mainstream media is going to rip Cruz a new one for all this morality and God talk.

Cruz’s bold unapologetic commitment to restoring the principles and values of my “Pumphrey” America, reinforced my commitment to do everything in my power to put this remarkable man of God, character and our Constitution into the Oval Office. This is it folks. Cruz is our one last chance, for Lord knows how long, to take back our country.

With a rock-solid record of keeping his word, Cruz vows not to compromise or negotiate away our religious liberty or betray the Constitution.

Our Conservative Campaign Committee team has been following the Cruz campaign from state to state beginning in Iowa. Yes, as chairman of CCC, I would like to take credit for Cruz’s victory. However, the truth is patriots coming together across America made it happen.

After traveling and waving signs on street corners all day, our team was pretty dead when we arrived at the Cruz rally in Mandeville, Louisiana. However, the crowd’s electrifying enthusiasm for Cruz energized us. My wife Mary and I stood for 3 hours at the front of the packed gymnasium holding our famous 6 foot “Ted Cruz: Conservative Hero” banner. And ladies, Mary was wearing heels.

Our Conservative Campaign Committee team is headed to Mississippi to help secure a victory for Cruz in the March 8th primary. Folks, it is not an exaggeration to say if Cruz is not elected, we could lose the America we grew up with for many, many years and possibly forever. We must get this done. Take back America for our kids and grand-kids; an America where God is not chased out, hard-work is expected and respected, right is right and wrong is wrong – my Pumphrey America. God bless, Lloyd