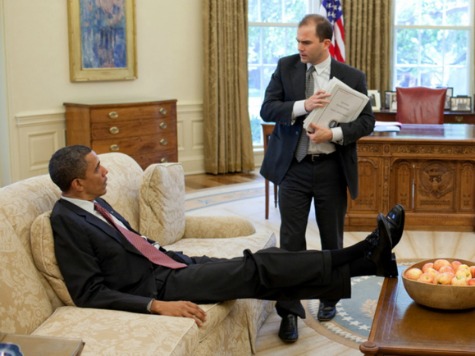 A recent article by David Samuels for the New York Times Magazine demonstrates how President Obama and his Deputy National Security Advisor Ben Rhodes have been exploiting the media’s willingness to repeat and promote the Obama administration narrative of the day. In the interview Rhodes irreverently nicknames the foreign policy establishment “the Blob” and states that most reporters the administration deals with on foreign affairs are only 27 years old and know nothing. The Blob includes not only top media people, but also “Hillary Clinton, Robert Gates and other Iraq war promoters from both parties who now whine incessantly about the collapse of the American security order in Europe and the Middle East.”

Carlos Lozada of The Washington Post describes the Times’ piece as so sycophantic that it has become “gross” through excess chumminess, hypocrisy and absurdity. For example, Lozada writes, “It is the blindness of a writer who declares that Rhodes is ‘not an egotist’ while offering countless examples of that subject’s gargantuan self-regard, and not bothering to note the contradiction.”

Michael Grunwald has also criticized Samuels in an article for Politico. His point is that Samuels is a hawk who opposed the Iran deal, and ignored the nuances in the Rhodes/Obama foreign policy, which Grunwald clearly finds admirable.

Samuels praises Rhodes as the “Boy Wonder of the White House,” and describes how Rhodes sold the press a false story about how the Iran deal negotiations came after President Hassan Rouhani and the “moderate” Iranians came to power. In reality, President Obama was looking for a deal with Iran before he was elected to office, something that Rhodes later had to admit. It turns out that there were no moderate Iranian leaders for the administration to work with—before or after the deal.

In fact, former Ambassador William G. Miller confirmed to author and historian Michael Ledeen that Obama sent Miller to Iran as a secret back-channel emissary during Obama’s 2008 presidential campaign. Miller was to inform the Iranian leaders that if they wait for Obama to become president, “they would be very happy with his policies.”

As to the moderation of the new Iranian regime, “He [Rouhani] has presided over a steady uptick of executions of Iran’s dissidents, as well as sexual and religious minorities,” reports David Reaboi for The Federalist.

According to Samuels, Rhodes’ gift is that he is “adept at constructing overarching plotlines with heroes and villains, their conflicts and motivations supported by flurries of carefully chosen adjectives, quotations and leaks from named and unnamed senior officials.”

In other words, Rhodes sold carefully crafted and prepackaged soundbites about Iran to the press to create a narrative that did not match the facts. Relying on such soundbites doesn’t make for informative reporting, and isn’t truthful. It is pure propaganda.

Now Rhodes’ loose tongue threatens to sully what the press sees as the President’s signature foreign policy achievement, the Iran deal. Most reporters refuse to mention—or are not aware—that the so-called Iran deal was never even signed. Thus, there is no Iran deal that both sides have agreed upon.

“The critical point that the deal’s opponents are missing in the current debate is that we believed deeply in the case that we were making: about the effectiveness of the deal, about the value of diplomacy and about the stakes involved,” Rhodes wrote in his own defense after Samuels’ controversial interview was published. “It wasn’t ‘spin,’ it’s what we believed and continue to believe, and the hallmark of the entire campaign was to push out facts.”

Josh Earnest, the White House press secretary, said, referring to Rhodes, “I’m confident he would say it differently if he had the chance.”

“Rhodes bragged to Samuels that he had manipulated the news media into publishing stories supporting the White House on the Iran talks,” notes Fred Fleitz for National Review. “Rhodes made use of ‘legions of arms control experts [who] began popping up at think tanks and on social media’ and became ‘sources for hundreds of clueless reporters,’” Fleitz writes. “According to Rhodes, this crop of newly minted experts cheerlead for the nuclear deal and, like ventriloquists’ dummies, ‘were saying things that validated what we had given them to say.’”

We have consistently reported on the administration’s use of false narratives to sell policies to the press, and thereby the American people. For example, it was the Obama administration that argued Congress’ choice for an Iran deal was between war and supporting a disastrous agreement that would eventually grant Iran nuclear weapons. The mainstream media then reported this as the only two options regarding Iran.

Rhodes’ fingerprints were all over this effort. “It was Rhodes who framed the Iran deal as a choice between peace and war,” wrote Lee Smith for The Weekly Standard, continuing, “and it was Rhodes who set up a messaging unit to sell the deal that created an ‘echo chamber’ in the press.”

The question many are asking is why Rhodes, the brother of the president of CBS News, would go public with these views—and hang people out to dry who were helping the Obama administration deceitfully sell the Iran deal to Congress and the public. Was it pride, arrogance, a chummy trust that Samuels wouldn’t write anything that made Rhodes look bad, or was he drinking too much?

Smith, who is with both The Weekly Standard and The Hudson Institute, has written a fascinating follow-up piece on that angle of the story, and about how The Washington Post, Jeffrey Goldberg of The Atlantic and Laura Rozen of Al-Monitor—all part of the “echo chamber”—have reacted to having their reputations besmirched, and having missed the scoop. Smith’s piece, “The Ben Rhodes Blow-up,” attempts to explain why Rhodes would “attack allies who helped the White House push through Obama’s signature foreign policy accomplishment?”

Remember, it was also Rhodes who authored the Benghazi “smoking gun” email which sought as a goal to “underscore” that the attacks that killed four Americans resulted from “protests [that] are rooted in an Internet video, and not a broader failure of policy.”

Smith argues that Samuels’ piece on Rhodes exposes that “the emotion driving the administration’s foreign policy is contempt—contempt for allies, colleagues, and the generations of American policymakers who built the post-WWII international order, ensuring relative global stability, and peace and prosperity at home.”

What matters to the administration and the press is not reporting the truth, but instead a convenient narrative that will cement President Obama’s foreign policy legacy.

Rhodes and his deputy Ned Price openly boasted about their powers in front of Samuels. “Price turns to his computer and begins tapping away at the administration’s well-cultivated network of officials, talking heads, columnists and newspaper reporters, web jockeys and outside advocates who can tweet at critics and tweak their stories backed up by quotations from ‘senior White House officials’ and ‘spokespeople,’” writes Samuels.

By quoting anonymous White House officials, the mainstream media need not identify the source of their information. Instead, the public is expected to trust that these anonymous officials operate beyond self-interest. As Samuels’ feature exposes, such trust is very much misplaced.

If, as they seem to brag, Rhodes and his aides are so fully manipulating the mainstream media, the press cannot be trusted, either.

Much as one might censure Rhodes for manipulating the media, it is really President Obama himself who is responsible for the spin coming out of the White House. Samuels writes that Rhodes spends two to three hours daily with the President and “mind melds” with him on many issues. It is President Obama’s policies, aspirations, and reputation on the line when Rhodes acts. It is no wonder, then, that many in the media are willing to repeat the lies coming from this administration.