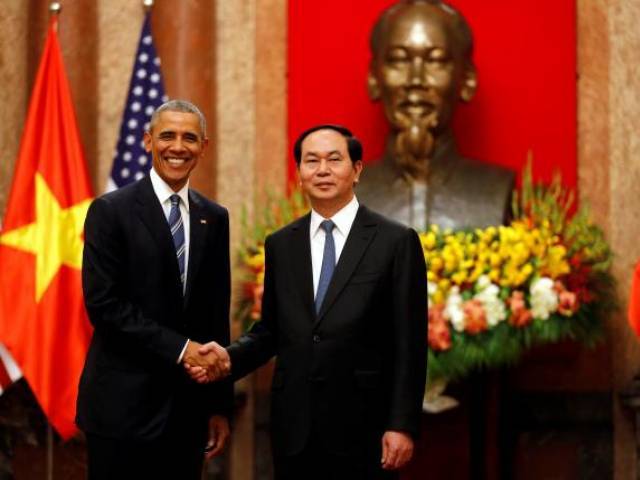 Having established relations with the Castro regime in Cuba, President Obama has now signaled his willingness to sell weapons to the Communist Party dictatorship that runs Vietnam. It is the successor to the regime in Hanoi, North Vietnam, which overran South Vietnam, while in the process taking the lives of more than 58,000 Americans resisting communist aggression.

Media coverage of President Obama’s announcement in Hanoi portrayed the move as an attempt to counter Chinese influence in the region. This is pure propaganda from another “echo chamber” established by the Obama administration to sell a controversial policy. While China and Vietnam have some disagreements over territory, they are still both communist countries that share the same objective of defeating global “imperialism,” led by the United States.

Chinese President Xi Jinping delivered a speech on China-Vietnam relations at the Vietnamese National Assembly in Hanoi, Vietnam, on November 6, 2015. He referred to how relations have assumed “strategic importance.” China is Vietnam’s largest trading partner. These communist countries are not enemies. They are friends.

Obama is more than happy to bolster another communist state. His comrades in the Hanoi Lobby made sure a liberal Congress cut off U.S. aid to South Vietnam in 1975, guaranteeing a communist takeover.

In addition to more than 58,000 Americans dead, 304,000 Americans were wounded during the war started by the communist regime in Hanoi. The number of South Vietnamese military personnel killed was estimated at 440,357. The number of Vietnamese civilians killed in the war is believed to be 587,000. Hundreds of thousands of “boat people” tried to escape when the communists took power, but more than 800,000 remained and were sent to communist “re-education” camps. The communist Khmer Rouge took power in neighboring Cambodia, murdering almost two million people.

“Obama ends U.S. arms embargo on Vietnam during visit to former enemy” was theUSA Today headline. But this “former” enemy is still a communist dictatorship that imprisons its people for seeking freedom.

Most stories we reviewed on Obama’s decision to arm the regime neglected to even mention that Vietnam is a communist country. However, it was big news that Obamadined in Hanoi, Vietnam, with CNN personality Anthony Bourdain. “The President’s chopstick skills are on point,” Bourdain said.

The more serious issue is a lack of political freedom under the dictatorship.

Time magazine’s story, “Vietnam Gets to Vote in Elections, but the Communist Party Picks Who’s on the Ballot,” provided some elementary facts about how the communist dictatorship orchestrates and stacks its “elections.”

We were led to believe by much of the media coverage that the government of Vietnam has suddenly turned capitalist and pro-American. However, its official websitedeclares, “Over the past 80 years, the Communist Party of Viet Nam (CPV) has been in the vanguard of the struggle for national independence, liberating the country from almost a century of domination by western colonialists and leading the people to total victory in the 30-year resistance war against powerful aggressors.”

Those “colonialists” and “aggressors” were the French and then the Americans.

To understand the nature of this dictatorship, consider that the Constitution of Vietnam declares that a citizen “shall enjoy freedom of belief and of religion…”

In truth, religious groups have to be registered with the atheist regime. The State Department’s International Religious Freedom Report states, “Some members of unregistered groups in particular reported various forms of governmental harassment, including but not limited to assault, short term detentions, prosecutions, monitoring, restrictions on travel, and denials of registration and/or other permissions.”

Desperate for money, like any socialist or communist regime, Vietnam managed to get the U.S. embargo on trade with them lifted in 1994. The dictatorship received permanent normal trade relations (PNTR) in 2006.

Here’s what an official communist document, “Viet Nam’s Present Foreign Policy,” says about that: “As the world becomes more globalized and the science-technology revolution advances with high speed, one major task of the Party and State is to proactively promote international integration, first and foremost in the economic field. In this process, high on Viet Nam’s agenda are to expand external economic relations, widen and diversify markets and take advantage of capital, managerial experience and advanced technology for national industrialization and modernization.”

It’s the same strategy Communist China has used to build up its economy and military.