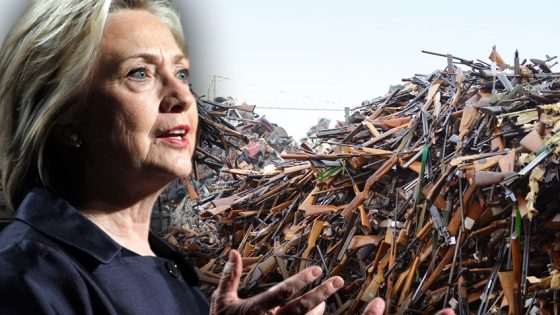 Hillary Clinton just outright refused to say during an interview yesterday that owning a gun was a constitutionally protected right. I’m not surprised in the least, but she is certainly getting more and more brazen about it.

George Stephanopoulos asked her point blank concerning the issue: “Do you believe that an individual’s right to bear arms is a constitutional right, that it’s not linked to service in a militia?” She gave a very weaselly answer: “I think that for most of our history, there was a nuanced reading of the Second Amendment until the decision by the late Justice [Antonin] Scalia, and there was no argument until then that localities and states and the federal government had a right, as we do with every amendment, to impose reasonable regulations,” Clinton responded. That is a flat out lie. The federal government does not have a right period in regards to constitutional amendments to impose regulations. That has never been true. The rights are granted to the people, not the government. Not only did she sidestep the question, she gave an even worse answer here. She is basing an outrageous answer on the fact that the federal government has gotten away with overreach forever and since they have, she feels that it is now the ‘right’ of the government to keep doing so. No… it is not. The government is granted certain powers that the people giveth and the people can taketh from them.

She added, “So I believe we can have common-sense gun safety measures consistent with the Second Amendment.” Not the way she means it and not mandated by the government. Common sense measures are those such as: don’t point the gun at things you don’t mean to shoot; keep your finger off the trigger until you are ready to shoot; be absolutely sure of your target and what’s behind it… and then there is Rule #1… all guns are always loaded.

Clinton’s lapdog Stephanopoulos wasn’t done though: “But that’s not what I asked,” Stephanopoulos interjected. “I said, do you believe that their conclusion that an individual’s right to bear arms is a constitutional right?” She didn’t answer once again, but notice the use of ‘if’: “If it is a constitutional right, then it, like every other constitutional right, is subject to reasonable regulations, and what people have done with that decision is to take it as far as they possibly can and reject what has been our history from the very beginning of the republic, where some of the earliest laws that were passed were about firearms.” It is a constitutional right and it is not automatically subject to regulations. It does not say that in the Constitution. The Constitution restrains the government, it does not give them carte blanche to control our rights. Per the Constitution, the government is supposed to keep its damned hands to itself. Constitutionalists interpret the Second Amendment the way it was written and intended… not redefined to fit the agendas of politicians and the federal government. That’s called tyranny. 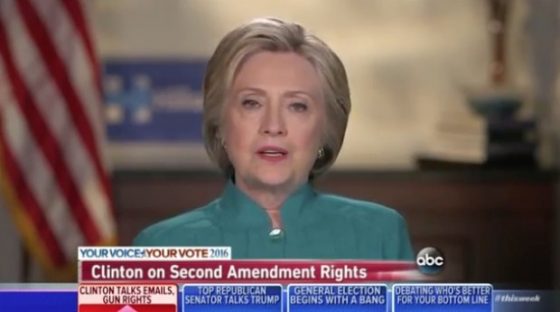 Hillary Clinton did suggest that gun owners do have a right, but then she claimed “the rest of the American public has a right to require certain kinds of regulatory, responsible actions to protect everyone else.” Again, no… they do not. There is no constitutional provision that says that. Clinton simply wants to do away with the Second Amendment altogether, or at the very least, redefine it progressively, so she can disarm America. It’s just that simple.

The Second Amendment states: “A well regulated militia, being necessary to the security of a free state, the right of the people to keep and bear arms, shall not be infringed.” Hillary’s deflections aside, she chooses not to interpret the meaning of this amendment in the spirit it was meant because it does not fit her political views.

Here’s the full exchange between Clinton and Stephanopoulos:

CLINTON: I think that for most of our history there was a nuanced reading of the Second Amendment until the decision by the late Justice (Antonin) Scalia. And there was no argument until then that localities and states and the federal government had a right – as we do with every amendment – to impose reasonable regulations. So I believe we can have common-sense gun safety measures consistent with the Second Amendment. And, in fact, what I have proposed is supported by 90 percent of the American people and more than 75 percent of responsible gun owners. So that is exactly what I think is constitutionally permissible and, once again, you have Donald Trump just making outright fabrications, accusing me of something that is absolutely untrue. But I’m going to continue to speak out for comprehensive background checks; closing the gun show loophole; closing the online loophole; closing the so-called Charleston loophole; reversing the bill that Sen. (Bernie) Sanders voted for and I voted against, giving immunity from liability to gun makers and sellers. I think all of that can and should be done, and it is, in my view, consistent with the Constitution.

STEPHANOPOULOS: And, and the Heller decision also says there can be some restrictions. But that’s not what I asked. I said, do you believe their conclusion that the right to bear arms is a constitutional right?

CLINTON: If it is a constitutional right, then it – like every other constitutional right – is subject to reasonable regulations. And what people have done with that decision is to take it as far as they possible can and reject what has been our history from the very beginning of the republic, where some of the earliest laws that were passed were about firearms. So I think it’s important to recognize that reasonable people can say, as I do, responsible gun owners have a right. I have no objection to that. But the rest of the American public has a right to require certain kinds of regulatory, responsible actions to protect everyone else.

Clinton also defended the idea of a gun tax, but stopped short of endorsing a proposal she first embraced in 1993. Stephanopoulos pressed her on the issue and she demure yet again: “I’m not going to commit to any specific proposal,” she deferred. “That was in the context of health care. When you have mass shootings, you not only have the terrible deaths, you have people who are injured.” Clinton claims the issue came up during a weekend meeting with survivors of the December 2015 terrorist massacre in San Bernardino, CA. “What they talked to me about was, where do they get the financial support to deal with both the physical and the emotional trauma?” she said. “There are real costs that people incur because of the terrible gun violence epidemic. And we have to deal with it. And I’m going to be looking for ways to deal with it.” “I’m not committed to anything other than what I’ve said in this campaign,” she added, “but I do want people to ask themselves, can’t we do better than to have 33,000 people killed every year by guns and many thousands more injured? And I think we can.” Translation… yes, she is all for a gun tax. A massive and crippling one – 25% to be specific.

Hillary’s stance on guns has never changed. She has always been against them.

From Americans for Tax Reform:

In passionate Senate testimony on Sept. 30, 1993, Clinton endorsed a new national 25 percent retail sales tax on guns. Americans for Tax Reform has released footage of Clinton’s visceral facial expressions which shows her nodding fiercely as she endorses the gun tax and as gun owners and dealers are described as “purveyors of violence.”

Clinton’s gun tax endorsement came in response to a question from then-Senator Bill Bradley (D-N.J.), who lamented the “accessibility that guns have in the country today.” He said to Hillary:

There are 276,000 gun dealers in America. There are more gun dealers in America than there are gas stations. That, to me, is a remarkable number and I think it is directly related to the accessibility that guns have in the country today. And if we simply put a 25 percent sales tax on the sale of a gun and raise the dealer’s fees from $30-$75 to $2,500, we would raise $600 million. That would be a tax directly on the purveyors of violence in terms of the sales of the means of violence.

Clinton gave her strong endorsement of the tax, saying, “I am all for that.” She concluded by saying, “I am speaking personally, but I feel very strongly about that.”

Hillary Clinton is one of the most anti-constitutional politicians that has ever disgraced America. Her own words and actions prove it. You should probably listen to more of what she doesn’t say, than what she does say and pay attention to how she nuances her answers. Words matter… the Constitution matters more. The Founding Fathers would have despised Hillary Clinton and would have considered her an enemy of the Republic.

2 thoughts on “Hillary Clinton vs. the Second Amendment”