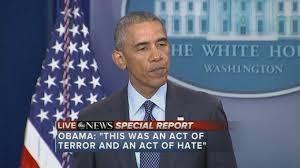 The media say President Obama is good at sharing condolences with victims of terrorism. It would be better for him to apologize to the victims and their families. He should start by saying, “I’m sorry that my FBI failed to stop this radical Islamic killer. I bear responsibility for this failure of intelligence.”

Orlando is where we really need an Obama apology tour to begin. In the past, he has apologized to foreigners for American foreign policy. Now he needs to apologize to Americans for allowing a foreign ideology to flourish in the United States, one which he has refused to name and condemn.

On Tuesday, when he rejected a ban on Muslim immigration, Obama said, “The Orlando killer, one of the San Bernardino killers, the Fort Hood killer—they were all U.S. citizens.” What was his point? That the Muslim refugees are not a threat but their children are? Is that supposed to be reassuring? Does it make sense to import more Muslims and let them raise children as Americans who then assume the foreign identity of the jihadists who want to kill us? Is that somehow acceptable? Doesn’t that increase the odds of having more killers on American soil?

Clearly, Obama is gambling with American lives, and Americans are losing their lives as a result. How many more will die, only to be remembered by Obama as he hugs the relatives of the victims?

No matter how he tries to spin it, the fact is that Omar Mateen was subject to two separate FBI investigations and was cleared both times. This is outrageous. Clearly, the FBI failed. And Obama failed in his constitutional obligations to protect the American people from foreign threats. Based on what he said about San Bernardino and Fort Hood, Obama knew the threat was real. But the terrorism keeps coming. Nothing seems to change.

On Monday, FBI director James Comey said the bureau would “look hard at our own work to see whether there is something we should have done differently.” But he had already come to a conclusion. “So far,” he said, “the honest answer is: I don’t think so.” Not even 24 hours had passed after the massacre and Comey had already conducted a thorough probe into the FBI’s handling of the case? Forty-nine people are dead and the FBI could not have done anything differently?

The FBI has done it Obama’s way for seven years. The Heritage Foundation’s David Inserra reports that there have been 22 plots or attacks since the start of 2015. The assault from radical Islam is accelerating, and yet it’s business as usual in the Obama administration and at the FBI. We are supposed to believe they are doing the best they can. If so, many more will die.

FBI Director Comey admits that in July of 2014 the killer’s name surfaced when the FBI Miami office was investigating “the Florida man who had blown himself up for the Nusra Front in Syria.” Comey said, “We learned from the investigation that the killer knew him casually from attending the same mosque in that area of Florida.” He added, “Our investigation turned up no ties of any consequence between the two of them.”

Omar Mateen and Moner-Muhammed Abu Salha, the Florida man referred to by Comey, are from St. Lucie County, Florida, and attended the same mosque. Is Comey suggesting it’s all just a coincidence? Does he really believe that? Does he expect us to believe that?

Meanwhile, the Council on American-Islamic Relations (CAIR) postponed the release of a report, “Confronting Fear,” because of the carnage in Orlando. The report is about “Islamophobia,” a mental condition that is said to characterize those who want to expose radical Islam in the United States. If the FBI had displayed a small dose of Islamophobia, perhaps it could have stopped the slaughter.

CAIR is saying that those of us who want to live in peace away from these killers are guilty of “Islamophobia.” This writer surfaced on one of CAIR’s lists of “Islamophobic individuals.” CAIR picked my name off a list maintained by the Southern Poverty Law Center, a group that has been advising the Justice Department and the FBI about the existence of “extremists” in American society. This would be funny if it were it not for the fact that people are dying because of this mentality, which is the real condition that should be characterized as an illness. These people are incapable of recognizing a threat that poses a very real danger to them and their families.

When your family members are killed by Islamic terrorists, will Obama’s hug be good enough for you?