Another excellent Dom Raso video has found its way to my desk and it does not disappoint. Raso lays it out bluntly concerning terrorists here in the US and getting armed to protect yourself and those you love. If you are not armed at all times, you are a sitting duck. You have to prepare yourself for the next San Bernardino, the next Boston, the next Orlando… wherever that may be. ISIS wants you dead… every infidel out there is now a prime target in the US. They are not misunderstood – they have made themselves abundantly clear and they are merciless and lethal.

I’m not sure ‘lone-wolf’ is the right term, but it will do. There are potentially thousands of these individuals across the US now waiting and plotting to kill people… your children, your spouse, your friends and family. This presidency has never seriously addressed the enemies within because they are one of them. Obama coddles and protects the Muslim Brotherhood and radical Islamists. He persecutes Christians and mainstream America. He is bringing terrorists into the US through refugee resettlement and illegal immigration. We need a leader who does not fear our enemies and who does not hesitate to deal with them aggressively. Dom Raso gets that. He knows how Islamists think and he has a message: Wake up, America. We need to make it clear to these radical Islamic cowards that any attempt to take innocent lives in our country will be met with immediate, violent resistance. 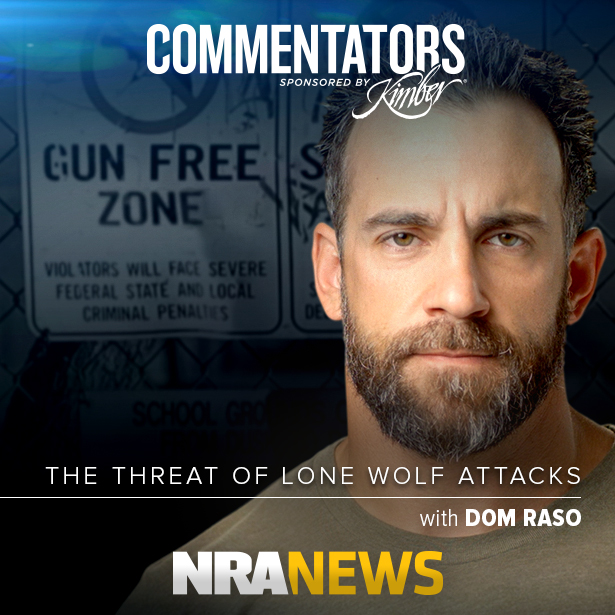 Meet NRA News Commentator Dom Raso. A U.S. Navy SEAL veteran, Raso says there are not many things that can compare to serving your country and defending your freedom. That freedom applies to firearms, too. “As long as humans exist, there will be weapons in this world. We’re better off knowing how to use them and apply them for the right reasons—than not knowing how to use them.” Raso is also the founder of Dynamis Alliance, an organization that offers specially designed gear and customized training programs for all levels of experience.

Listen to what Dom Raso has to say on fighting the enemy within:

We need leaders who will get rid of useless gun-free zone laws that give killers a clear advantage over the law-abiding.” He also makes it clear that those who are more concerned with offending our enemy than stopping them are making themselves and other Americans “sheep” and easy targets for radical Islamic terrorists and the lone wolves they inspire: “Rather than addressing this obvious threat with simple, clear solutions, the liberal media, PC politicians and Hollywood know-it-alls attack people like me.” Raso, who spent 12 years hunting down terrorists, points to Benghazi as a prime example of why we cannot trust our politicians or the media to tell the truth or keep us safe: “Only in Washington is it possible for anyone to believe that hundreds of people decided to grab AK-47s and mortars, and started attacking the American consulate in Benghazi because of a stupid video.

Last Wednesday, Raso released “The AR-15: Americans’ Best Defense Against Terror and Crime,” where he called out Hillary Clinton’s hypocrisy for wanting to restrict Second Amendment freedoms, while she has spent the last three decades being protected by guards armed with AR-15s. The video has been viewed over 6 million times and has been covered in more than 75 national and international outlets including Fox News, CNN and The Daily Mail.

ISIS doesn’t have to kill a single American to bring our country to a standstill … as long as someone else does the killing for them.

Those weren’t ISIS attacks, and they didn’t need to be.

Their greatest capacity to inflict suffering, panic and paranoia is by inspiring people already living here to act on their own.

How do you stop an American citizen from reading Islamic State propaganda, or watching ISIS videos online, and radicalizing and deciding to go shoot everyone in Times Square?

That problem is on the president’s desk every single day.

And our failure to respond to that problem proves how weak we’ve become.

Rather than addressing this obvious threat with simple, clear solutions, like hardening our defenses, getting rid of the dangerous lie of gun-free zones and allowing Americans their Second Amendment rights anywhere inside our borders … the liberal media, PC politicians and Hollywood know-it-alls attack people like me.

They say I’m the problem.

Because I tell the truth about cowards who use women and children as human shields … who twist their religion to murder innocent people … I’m the problem.

Because I educate my fellow Americans about the way terrorists think and the things they’re willing to do … I’m the problem.

This is what happens when the country is run by political and media hacks who never even thought of serving their country.

Only in Washington is it possible for anyone to believe that hundreds of people decided to grab AK-47s and mortars, and started attacking the American consulate in Benghazi because of a stupid video.

[CLIP: This is a response to a hateful and offensive video … This is in response to a video that is offensive … We’ve seen rage and violence directed at American embassies over an awful Internet video … A crude and disgusting video sparked outrage throughout the Muslim world …]

You know what inspires cowards?

Easy targets. Sheep. People who worry more about offending the enemy than stopping him. People they know don’t have the training to fight back.

If I’m a suicidal terrorist, who do I want to run into on my killing spree—armed civilians who will immediately return fire, or an unarmed, untrained person who will cower in the corner and beg for mercy?

I can’t believe I have to say this, but IT DOESN’T MATTER WHICH CHOICE YOU MAKE … a terrorist is going to want to kill you either way.

Terrorists do not think like you. THAT IS WHY THEY ARE TERRORISTS.

THEY WILL NOT STOP WANTING TO KILL YOU.

We can’t change that fact. But we can change our mindset.

We need leaders who will get rid of useless gun-free zone laws that give killers a clear advantage over the law-abiding. Leaders who understand the best asset we have to defend ourselves is the freedom of the American people.

The longer it takes us to realize it, the more innocent people will die.