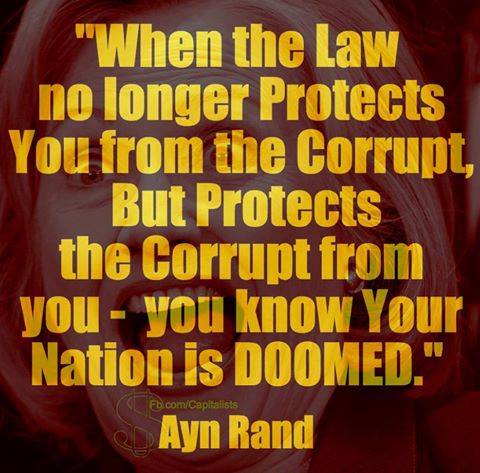 I have lost all faith in both parties and our government. Yesterday, the rule of law in America officially died. There was no fanfare or pretense… only corruption. As Ayn Rand said: “When you see that trading is done, not by consent, but by compulsion – when you see that in order to produce, you need to obtain permission from men who produce nothing – when you see that money is flowing to those who deal, not in goods, but in favors – when you see that men get richer by graft and by pull than by work, and your laws don’t protect you against them, but protect them against you – when you see corruption being rewarded and honesty becoming a self-sacrifice – you may know that your society is doomed.” That just about sums it up. Time to go to Galt’s Gulch.

FBI Director James Comey pronounced Hillary Clinton innocent of all wrong doing in the email scandal that has engulfed her now for well over a year. A man who was thought to be ethical and had integrity proved beyond a shadow of a doubt he was anything but. I have said from the beginning, when you lose the unbiased nature of our military and intelligence agencies, you are toast and he has unfortunately proven me exceedingly right.

No amount of cynicism could have prepared Americans for what they witnessed on Tuesday morning, and 2016 has not been short on cynicism.

That has bite and screams truth from the rooftops. But if you want even more truth, ask someone who lived under communism what this means. In response to the Comey verdict, Karo. Markowicz tweeted out a statement as to how others who came from the USSR expected no other result: “Guys, the ex-president’s wife was never going to get indicted.” – all my USSR-born friends.” We now live under a manipulated, de facto dictatorship, regardless of party, that pretends Americans are free, while ruling corruptly for and by the elite. Sounds a lot like communist Russia or China to me.

History repeats itself and this particular chapter has Russian overtones – EdgeOfTheSandbox had this to say:

In the waning days of the Soviet Union, the goings on of the nomenclatura were shrouded in mystery. We gossiped about the families of Politburo members, but didn’t know who they were for sure. The only thing certain was that they were above the law, or whatever pretense at law the USSR managed to stage. This produced a culture of cynicism and hopelessness and an epidemic of alcoholism.

Feels oh so familiar, now doesn’t it? Andrew McCarthy nailed it in his first paragraph over at National Review:

There is no way of getting around this: According to Director James Comey (disclosure: a former colleague and longtime friend of mine), Hillary Clinton checked every box required for a felony violation of Section 793(f) of the federal penal code (Title 18): With lawful access to highly classified information she acted with gross negligence in removing and causing it to be removed it from its proper place of custody, and she transmitted it and caused it to be transmitted to others not authorized to have it, in patent violation of her trust. Director Comey even conceded that former Secretary Clinton was “extremely careless” and strongly suggested that her recklessness very likely led to communications (her own and those she corresponded with) being intercepted by foreign intelligence services.

And yet, here we are. Hillary Clinton walks away unscathed after committing blatant violations of the Espionage Act and what I consider to be treason. The fix was in, she was never going to answer for any of this. Ever. 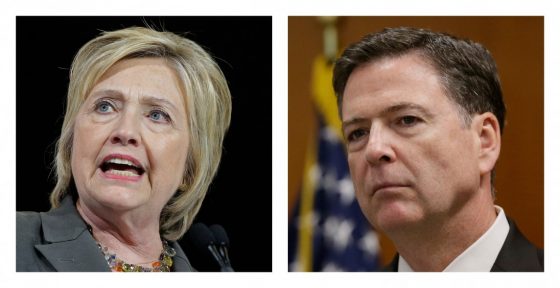 In essence, in order to give Mrs. Clinton a pass, the FBI rewrote the statute, inserting an intent element that Congress did not require. The added intent element, moreover, makes no sense: The point of having a statute that criminalizes gross negligence is to underscore that government officials have a special obligation to safeguard national defense secrets; when they fail to carry out that obligation due to gross negligence, they are guilty of serious wrongdoing. The lack of intent to harm our country is irrelevant. People never intend the bad things that happen due to gross negligence.

I would point out, moreover, that there are other statutes that criminalize unlawfully removing and transmitting highly classified information with intent to harm the United States. Being not guilty (and, indeed, not even accused) of Offense B does not absolve a person of guilt on Offense A, which she has committed.

Andrew McCarthy, Paul Ryan and Ted Cruz have all said this makes absolutely no sense and it doesn’t. It defies explanation, except for cronyism and in-your-face corruption. The law is being flaunted here. Let’s put it this way… when the people feel laws are not just and the law means nothing, crime goes up and rebellion brews. Always.

No one should ever be above the law. Unless of course you are an elitist acting like a czar and feel that the law does not apply to you. It is small wonder a populist uprising and the politics of vengeance are boiling here in the US. Politicians might do well to reflect on the French Revolution right about now, as well as the American Revolution.

In April, 2003, investment banker Frank Quattrone was indicted on charges of obstruction of justice by then-US Attorney for the Southern District of New York by James Comey for one email sent to employees. 21 words brought an indictment. Yet, Comey could not recommend charging Clinton at all seemingly.

Ted Cruz is demanding answers on the whole mess. He wants access to information tied to the FBI’s probe of Hillary Clinton, saying the decision to recommend no charges “threatens the rule of law.” Once again, Cruz is presidential and right here.

From Ted Cruz: “Under President Obama, we have seen the most politicized Department of Justice in history; I very much hope that politicization has not similarly corrupted the Federal Bureau of Investigation,” Cruz said in a statement Tuesday. “I join my Senate Judiciary colleagues… in calling for public transparency of, and full access to, all the information that the FBI used to come to today’s dubious decision.” Cruz added Tuesday that he has “serious concerns about the integrity of Director Comey’s decision.” As do I sir, as do I. “Director Comey has rewritten a clearly worded federal criminal statute. In so doing, he has come dangerously close to saying that grossly negligent handling of classified information should not result in serious consequences for high-level officials,” he said. Doing so, declares the rule of law all but dead in America. It means the power brokers and elites are above the laws that apply to everyone else. It is the very definition of corruption.

One wonders if someone got to Comey, or was he this bought and paid for all along? I agree with Patricia McCarthy, our government has morphed into an actual crime syndicate and it doesn’t matter which party is elected here, that syndicate will continue and grow.

And as Ben Shapiro wrote: “It’s not just the corruption that shocks — it’s the flagrant, shameless display of it.”

Aristotle’s definition of tyranny speaks here: “…that arbitrary power of an individual which is responsible to no one, and governs all alike, whether equals or betters, with a view to its own advantage, not to that of its subjects, and therefore against their will. No freeman willingly endures such a government.” The problem here is that the people cannot decide whether we are a nation of laws or not come election time… either choice now leads to lawlessness and tyranny.

Bob Owens may have made the most profound statement of all: “When the rule of law no longer matters, it’s time to gun up.” Millions of Americans will look at what just happened and prepare for the worst now. They have had the blinders stripped off and now clearly see this is no longer the land of the free. And the fun has only begun with the House Republicans joining Democrats in pushing legislation that will completely gut the Bill of Rights, infringing upon the First, Second, Fourth, Fifth, and Sixth Amendments, according to Republican Rep. Justin Amash. Not only is corruption ignored and rewarded… not only is the rule of law dead… the Constitution is being destroyed once and for all by both sides. When corruption reigns, revolution follows.

6 thoughts on “The Rule of Law is Dead in America”