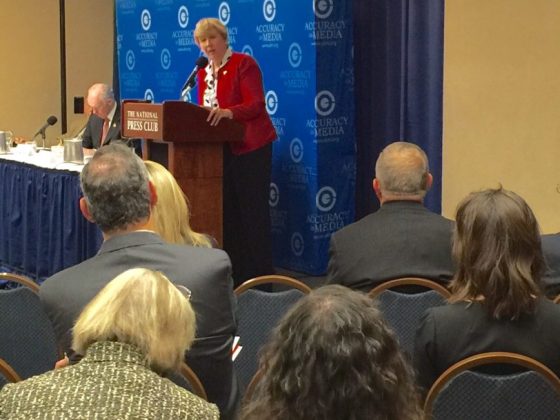 The Citizens’ Commission on Benghazi (CCB) recently held a press conference and issued a report uncovering new details about the events leading up to and during the September 11, 2012 attacks in Libya that took the lives of four Americans. However, the press has done what it usually does when a story threatens the narrative or reputation of the administration of President Barack Obama and former Secretary of State Hillary Clinton—they have, for the most part, ignored or misrepresented the CCB’s findings.

The speakers at our June 29 event at the National Press Club in Washington exposed, once again, how the U.S. facilitated the provision of arms to al-Qaeda-linked rebels, and demonstrated that there were many warnings leading up to the attack on the Special Mission Compound, warnings that the administration ignored. In addition, the administration was derelict in its duty to send forces to aid those under attack in Benghazi.

I said that “There’s a media theme, or meme, out there that keeps saying—and you see this [at the] New York Times, CNN, everywhere, saying, ‘No new evidence of any wrongdoing by Hillary Clinton.’ That seems to be the conclusion of most of the media in response to yesterday’s [House Select Committee report]. And we see a field of smoking guns.”

“No matter what comes out…the role of many in the mainstream media is to protect the legacy of President Obama and protect the presidential candidacy and viability of Hillary Clinton,” I argued.

I was joined by a number of other members of the CCB, including former CIA officer Clare Lopez, General Thomas McInerney, Lt. Colonel Denny Haney, Admiral James “Ace” Lyons (all retired), our attorney John Clarke, as well as guests Rear Admiral Chuck Kubic (ret.) and Charles Woods, father of Ty Woods, the former Navy SEAL who was killed in the attack on the CIA Annex.

Here are some of our findings, in the words of each of the CCB members and the guests. In my earlier column on the press conference, we included a video of the entire event, including Q&A and crosstalk among the panelists. Here we present a video of each individual speaker. If you want to see the Q&A as well, please go to the previous column:

“So, when we undertook to begin this second report, we think that we bring to this topic a willingness to name names, a willingness to assign responsibility and to demand accountability that too many of the others, committees and others, have not done—have neglected to do.”

“Now, from Christopher Stevens to the folks at the CIA Annex, they were in fact then relying on exactly the jihadist enemy that was eventually to turn on them and to kill four Americans and injure others so gravely.”

“Absolutely, they [Hillary and Obama] lied. There’s no question. We know, again, from Judicial Watch documents obtained through the FOIA process that the administration, including the President and Secretary of State Clinton, were actively involved that very night while the attack was still going on in concocting a false narrative to deflect the story from the truth and to defend at all costs, even the cost of American lives, the re-election campaign of the President. They were not even decided on which video they were going to blame. They only knew that they were going to blame a video.”

“We should have prepositioned F-16s from Aviano down to Sigonella to be on 15-minute alert.”

“It was 9/11. Isn’t 9/11 a significant date for us? And yet we had none of this preparation. We had all of the Combatant Commanders back in Washington, DC, on a commanders’ conference.”

“So, there was no pre-planning. I call that dereliction of duty.”

“I talked to Sean Smith’s uncle this morning, and he said he’s read our report. He got halfway through [Trey] Gowdy’s report, he got all the way through our report. He says read this [CCB] report if you want to know the truth.”

“Qaddafi was out there killing bad guys. He was killing al Qaeda, and al Qaeda we supported—they went to Syria, they became ISIS. We developed ISIS. That’s a fact.”

“And when I watched the [Select Committee on Benghazi’s] press conference yesterday, to say I was disappointed would be an understatement, because Chairman Gowdy is not a stenographer and he’s not a tape recorder. He was there to make findings and conclusions. He had the information; he copped out.”

“There’s no reason why F-16 aircraft weren’t moved from Aviano to Sigonella, or to Souda Bay, Crete—either place. We had a 130-man Marine force recon team at Sigonella. We had the Marine FAST teams at Rota. We had the Commanders’ in Extremis Force in Croatia. We had assets.”

“We know Jeremy Bash, the chief of staff at the Department of Defense, at 1910 that evening sent an email, or called the State Department, and said ‘we’re spinning up as we [speak].’ Where do we get the cross border authority?”

“And I found out eventually that it was Secretary Clinton working directly with the Joint Chiefs of Staff, who had shut down not that truce talk [with Qaddafi] but had struck down a parallel one I didn’t even know was happening through a different business channel.”

“So it struck me that the same behavior that shut down the 72-hour truce at the onset of the war, leading to death, destruction a failed state, was the same kind of behavior that existed in that 7:30 [Deputies] meeting.”

“Many, many times Ty as a Navy SEAL in his 20 years of service was in worse situations than this. But he always knew that if there was a compromise of the mission, that he was going to be extracted. That did not happen in this case. That’s part of the DNA of being in the military. That’s part of the code of ethics, is you are always rescued.”

“We have a lot of experts in the military that say they could have been rescued. No attempt was made.”

You can read the CCB’s new report here. It is well documented, it puts Benghazi in context, it explains why we were in Libya, what we did and didn’t do, and it names the people most responsible for the failures of Benghazi.