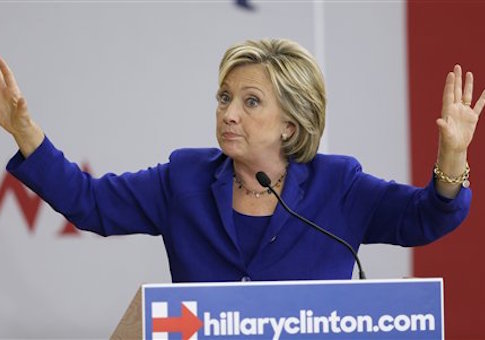 In his “That Bloody Woman” editorial in Chronicles about Hillary Clinton, Chilton Williamson, Jr. writes about the “cadre of aging and bitter feminists” backing the Democrat for president. He says they “would enthusiastically elect a dead woman as president to vindicate the Sisterhood younger women care little about.” It appears this “Sisterhood” is finding its voice in The Washington Post.

As the trusted voice of far-left feminism in the nation’s capital, the Post ran these headlineson Saturday afternoon about Donald J. Trump’s decision to pick Indiana Governor Mike Pence as his running mate: “Trump had a problem with women voters. Pence could make it even worse.” What is Pence’s problem? Well, he “has endorsed controversial legislation on abortion and Planned Parenthood.”

After a pilgrimage to Stalin’s Russia, Sanger said, “[W]e could well take example from Russia, where birth control instruction is part of the regular welfare service of the government.” She hailed the Soviet Union’s abortion law, noting that Russia was probably the first country in the world to give official approval to abortion.

“Russia today is the country of the liberated woman,” she announced.

Ignoring all of this, Post reporter Zezima went on: “Democrats—including presumptive presidential nominee Hillary Clinton—women’s health advocates and gay rights groups wasted no time pouncing on Pence, whom they described as extreme, anti-woman and anti-gay.”

By contrast, Hillary Clinton says she admires Sanger and opposes limits on abortion at any stage of pregnancy. She says the “unborn person” doesn’t have a constitutional right to life.

Doesn’t this make her anti-human or anti-life?

The Post term, “women’s health advocates,” means apologists for abortion and disregard for the sanctity of human life.

“Earlier this year,” the Post said, “Pence signed one of the nation’s farthest-reaching abortion laws, which bans abortions of fetuses diagnosed with Down syndrome or any other disability or because of the race, sex or ancestry of the fetus.”

Another way to say this is that Pence favors the right to life of disabled people and wants to prohibit deadly discrimination against them in the womb.

Hitler regarded the disabled as “life unworthy of life.” According to the U.S. Holocaust Museum, children with disabilities were sent to “killing wards,” where they were murdered by lethal overdoses of medication or by starvation.

Hillary Clinton and other “progressives” endorse the same thing, as long as it is done in the womb.

This is the mark of the Sisterhood: abortion for any reason at any time.

“In Congress,” Ms. Zezima said, “Pence embarked on a crusade against Planned Parenthood, filing the first legislation that called for barring the organization from receiving federal funding.”

The word “crusade” is meant to suggest he’s a religious fanatic. He was the “first” to file such legislation, meaning he’s really a pro-life nut.

“The addition of Pence tacks the GOP ticket far to the right on gay issues as well,” she adds. That means he’s serious about protecting traditional values.

One never finds the term “far-left” used in the Post to refer to the feminists in the Democratic Party or their lackeys at papers like the Post. The Post warns about Pence, “He is also against allowing undocumented people a pathway to citizenship.”

The term “undocumented people” is, of course, a euphemism for illegal aliens. These are people who broke the law to enter the United States. To the Post, they are merely “undocumented,” meaning that the dog ate their homework—through no fault of their own.

Zezima might as well be on the payroll of the Hillary Clinton campaign. Or perhaps she is working for Planned Parenthood.

This is the Sisterhood in action. Expect more garbage of this nature from the liberal media.