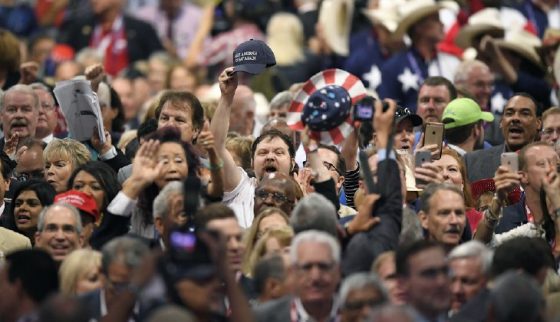 The odds were against those who opposed Donald Trump at the Republican Convention from the outset. They did not prevail yesterday and what I briefly witnessed was jaw-dropping. It shows an utter contempt for the grassroots and the intentional eradication of conservatism in the Republican Party. If I hadn’t already been staunchly against Donald Trump before yesterday, I certainly would have been by today. I’ve also developed an uber aversion to nationalism and populism. It reminds me far too much of Germany in the 1930’s.

I’m well aware mine is not the popular stance. Everyone wants on the Trump train… even many of those who staunchly stood against Trump after what he did to Ted Cruz are beginning to warm to him. Many are in a panic to keep Hillary Clinton out of office and I can understand and appreciate that. What I can’t do here is follow evil to keep evil out of power. I can’t and won’t do it, no matter the cost. When this started, I was gently warned that if I stood against Trump, it would destroy me. So be it. I will raise my voice and keep speaking out as long as I can, regardless of what they do.

I am far from alone in this. Many constitutional conservatives have been threatened by Team Trump. We are told to get out of the party and that our viewpoints and votes don’t count. We are also told that if Trump loses to Clinton, it will be our fault. You can’t have it both ways… either we are irrelevant or too relevant. We are told that if we don’t vote for Trump, it is a vote for Clinton. What hogwash and that is a monstrous lie all in itself. I and many others will vote our conscience and stand by our principles and no one… I mean NO ONE is going to bully us into following their dear leader.

Yesterday, on the first day of the convention, I watched the former attorney general of Virginia Ken Cuccinelli and Senator Mike Lee of Utah call for a roll call of the states. This is normal and they wanted a vote on the rules going forward in the party. What wasn’t normal was the chairman first calling for a voice vote, which he gave to the Trumpsters and then walked off the stage, initially denying the roll call vote. After some time, he finally came back and took another voice vote, which he again gave to the Trumpsters. I listened and it sounded like a tie to me, but it wouldn’t have mattered… the fix was in. All you had to do was look at the seating arrangements at the convention to know that. The ones for Trump were given prime seating. 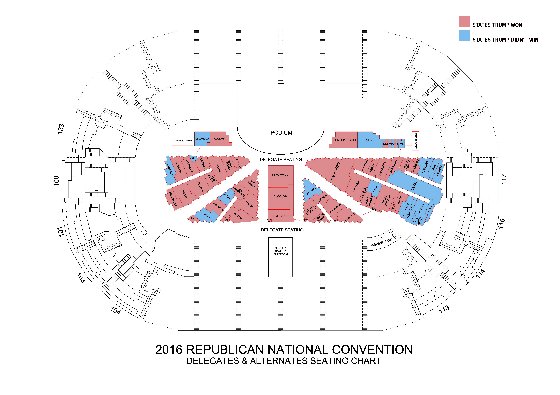 This whole thing was over a rules package. This package was not just an anti-Trump package, but also included a number of reforms that conservatives – including some pro-Trump delegates have been supportive of. But it wasn’t even allowed to be brought forward. Originally, 11 states supported the package. According to RedState, the secretary was literally physically hiding from delegates who were attempting to file petitions to force a roll call vote. Other witnesses allege that delegates who attempted to force the issue were prevented from approaching by armed guard. The petitions were finally filed and accepted.

Those delegates were hoping for a state-by-state vote on the rules that bind delegates to back Trump.

“I have no idea what’s going on right now,” Utah Sen. Mike Lee said Monday, who helped lead the failed uprising. “This is surreal.” 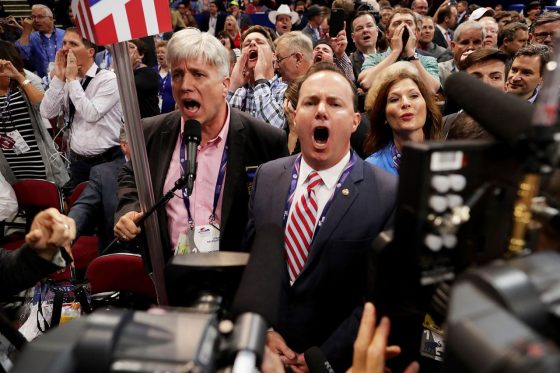 Deputy Chair Steve Womack eventually recognized the delegation from Utah, who requested a roll call vote. Womack stated that initially, 9 states had filed petitions, but three withdrew, leaving the motion under the 7 states required for a roll call vote. Therefore, he says, a roll call vote cannot happen. The convention has moved on to the platform committee consideration. It appears the rules challenge and the roll call vote is dead. The three delegations that dropped out of the effort to challenge the rules package were the District of Columbia, Minnesota and Maine. Alaska did not file the paperwork properly, while Iowa dropped out after the fact. As I said before, there were 11 states, not 9. What I can tell you is there was strong arming and bribing going on. If Trump is elected, his presidency will certainly be known for its heavy-handed, unconstitutional, thuggish ways. Not to mention pathological lying.

Rory Cooper, senior adviser with the Never Trump group, blasted party officials, saying in a statement: “Delegates presented party officials with more than enough states to force a roll call vote on the floor. There is no excuse for strong arming delegates and skirting the rules to silence these members of the party.”

North Dakota delegate Gary Emineth, who had a role on the Trump Victory fundraising committee, resigned in protest following the floor fight over the way the anti-Trump forces were treated.

“They want a kumbaya moment. Why can’t we have a little drama?” he said. He also had strong words for RNC Chairman Reince Priebus; asked if Priebus should resign, he said “yes.”

“We won’t sit around and coronate a king,” said Colorado delegate Kendal Unruh, who like many insurgents backed vanquished presidential contender Sen. Ted Cruz of Texas.

Many delegates began chanting: “Roll Call. Roll Call,” effectively calling for a lengthy process that would allow every state to weigh in. Following the votes, almost all of the Colorado and half of Iowa’s delegations walked out. Former Virginia attorney general Ken Cuccinelli and members of his state’s delegation were screaming “shame” amid the vote; he later told CNN the RNC “violated its rules.”

“This entire system is rigged to force the vote for Donald Trump,” said Kendal Unruh, one of the Colorado delegates. Cuccinelli called the situation “appalling”.

“This is the party of law and order. … If you won’t obey your own rules there is no reason to think you’ll obey any others,” Cuccinelli told MSNBC. 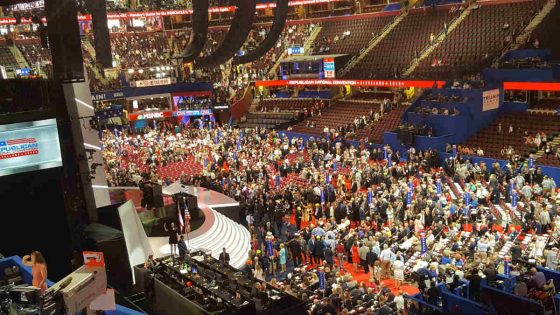 Trump’s son and adviser, Donald Trump Jr., threatened the leaders of the attempted revolt, saying: “Your careers are finished” in a message posted on Twitter. Trump’s campaign had the names of the delegates standing against him and they were hounded and threatened yesterday.

A Utah delegate also claims to have been confronted:

A Utah delegate was reportedly threatened inside a bathroom at Quicken Loans Arena during the Republican National Convention Monday.

According to NBC, Utah delegate Kera Birkeland was on the floor during the Rules vote as one of the delegates calling for a roll call vote.

Birkeland reportedly went to the women’s restroom and when she emerged from a stall, a group of Trump supporters surrounded her and threatened to kill her, urging her to leave the party and the state.

Birkeland is 33 years-old, a Mormon and a Cruz delegate.

After all this occurred and Trump continued with the convention, I just sat in wonder at how easily those I thought were conservatives, eschewed their values to follow the cult of personality in Donald Trump. An unprincipled, dishonest, vile and vicious man, who is Godless in my opinion. He is using people left and right and manipulating the system expertly. We had a real chance to elect a constitutional conservative… a man of faith and principles… and we turned away not only from everything this country was founded upon, but God Himself. As this plays out, there will be a heavy price to pay and America has earned it every step of the way over this. I know Cruz is slated to speak… I wish he would cancel. It would be way more than appropriate here.

Eerily, Melania Trump’s speech sounded like a retread of Michelle Obama’s speech in 2008. Looks like the RNC has bought into the same type of leadership that the left bought into in 2008. It’s a repeat, only on the right.

The Republican Party is now more of a banana republic than a political force, where only those who support Trump have a voice. Conservatives and constitutionalists are being purged just as promised by Trump and his minions. They show an overwhelming tendency to violence, force and mafia-tactics.

The moment that spoke the most to me was Trump’s theatrical entrance, where he walked in slowly with dim lights and fog surrounding him. It was the counter to Greek columns. This is what we have chosen as our candidate. God help the Republic, but I doubt it. 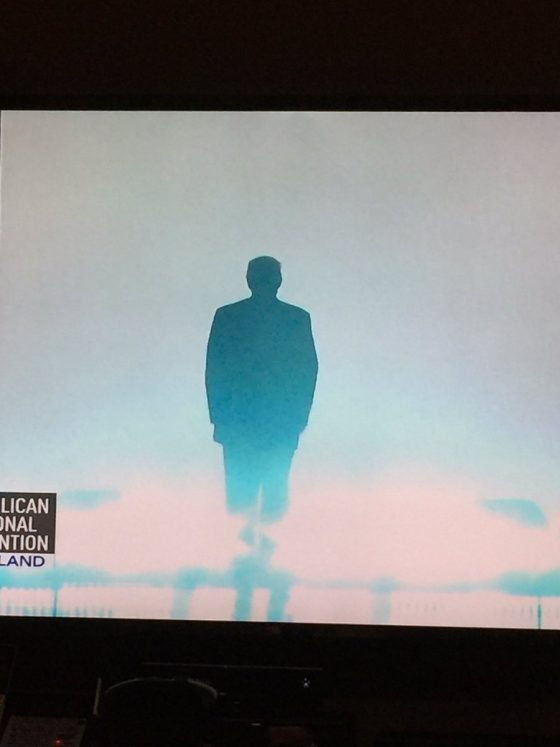 9 thoughts on “GOP Convention: The Former Party of Law and Order Goes Bananas (as in Banana Republic)”