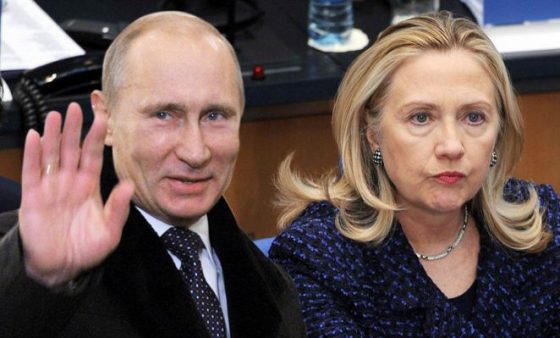 The media are shedding crocodile tears for Hillary Clinton. “Why Putin Hates Hillary” is the headline over a Politico story by Michael Crowley and Julia Ioffe about the stolen Democratic National Committee (DNC) emails. To the contrary, Russian President Vladimir Putin loves Hillary. He has taken advantage of her once, in the “Russia Reset,” and is preparing to take advantage of her again. She is the ultimate dupe. Putin has Hillary just where he wants her. He has access to some of Hillary’s deepest and darkest secrets.

The idea that Mrs. Clinton and the DNC have been victimized by Putin is absurd. This isn’t Putin’s fault. It’s the fault of the DNC. They didn’t maintain security over their email operations.

But, of course, neither did Hillary.

Politico says Putin is angry at Clinton for challenging the fairness of Russian elections. Almost on cue, Time magazine is out with a story taking a similar line. Time says Putin is mad that Hillary encouraged protests against his rule. In retaliation, the story goes, his hackers stole the DNC emails.

The other propaganda line from the media is that Putin favors Donald J. Trump over Hillary because Trump has business deals in Russia, and may even be in debt to some of Putin’s friends. According to this logic, which makes some sense, Putin has leverage over Trump, too.

There will be a way to test this theory.

Senator Tom Cotton (R-AR), a member of the Senate Intelligence Committee, suggests that Trump’s views on Russia may change once he’s briefed on Russia’s aggressive intentions. This is an excerpt of an exchange with Cotton from a CNBC interview:

“CNBC’s John Harwood: One of the questions that has been raised about Donald Trump is, ‘Is he more friendly with Russia than it is in America’s best interests to be?’

Senator Cotton: Vladimir Putin was a KGB spy and he never got over that. He does not have America’s best interests at heart and he does not have any American interests at heart. I suspect, after this week, when Donald Trump is the nominee and he begins to receive classified briefings, similar briefings to what I receive as a member of the Intelligence Committee, he may have a different perspective on Vladimir Putin and what Russia is doing to America’s interests and allies in Europe and the Middle East and Asia.”

What Cotton is saying is that Trump’s soft-on-Russia policies could, and should, change after these briefings have occurred. If they do not, then Republicans will have a serious problem with their nominee.

On the other hand, Mrs. Clinton was burned once by Putin, during the Russian reset, and could get burned again. Remember that the Associated Press reported last October that the private email server running in Hillary Rodham Clinton’s home basement when she was secretary of state “was connected to the Internet in ways that made it more vulnerable to hackers while using software that could have been exploited…”

FBI Director James Comey confirmed that the emails were at risk. He said that while investigators did not find direct evidence that “hostile actors” hacked into Mrs. Clinton’s personal e-mail domain, “given the nature of the system and of the actors potentially involved, we assess that we would be unlikely to see such direct evidence” (emphasis added). He did say that hostile actors “gained access to the private commercial e-mail accounts of people with whom Secretary Clinton was in regular contact from her personal account.” He added, “We also assess that Secretary Clinton’s use of a personal email domain was both known by a large number of people and readily apparent. She also used her personal email extensively while outside the United States, including sending and receiving work-related emails in the territory of sophisticated adversaries. Given that combination of factors, we assess it is possible that hostile actors gained access to Secretary Clinton’s personal e-mail account.”

From a security standpoint, therefore, one has to assume that these hostile actors did in fact gain access to her email system. Those hostile actors have to include Russia. You cannot proceed on any other assumption.

In a July 25 editorial, The Washington Post blamed Trump for the Russian hack of the DNC, saying he had somehow given them the “motivation” for such an attack because of his soft-on-Russian foreign policy positions. The Post said that Russia favors Trump over Hillary and wanted to sabotage her candidacy with the leak of the DNC emails on the eve of her convention.

But if Russia has Mrs. Clinton’s emails, and the evidence strongly points in that direction, it can be safely assumed they have potential blackmail material to use against her. Those emails probably involve not only a number of sensitive government activities but information about Mrs. Clinton personally, her family, the Clinton Foundation and her aides. The material could involve information of a financial or personal nature.

Moscow’s judgment, the Post editorial claimed, is that “it stands to reap a geopolitical windfall if Donald Trump is elected president.” That will only be the case if Trump persists in his pro-Russia policy and ignores the intelligence information about Russia’s aggressive intentions that Senator Cotton says he will receive. Trump still has time to reverse course on matters involving Russia, NATO and national security.

By contrast, Moscow already reaped a geopolitical windfall when Hillary was secretary of state and used the reset to invade Ukraine and expand militarily into the Middle East. Despite anti-Russian language in the 2016 Democratic platform, Mrs. Clinton has shown extremely bad judgment on Russia in the past. It’s possible she has changed her position. But Putin has so much potentially damaging information about Mrs. Clinton in those emails that this former KGB officer may think he can keep her in line. All that he has to do to keep a President Hillary Clinton in line is threaten to release some of the damaging information already in his possession. The leaks could come through WikiLeaks, the source of the DNC emails, or the Edward Snowden network.

These are the choices: Trump can reverse course and say and do the right thing about Russia. Hillary can talk tough about Russia during the campaign and do Putin’s bidding under threat of blackmail as president.

In short, Mrs. Clinton is a proven risk to national security. She is under effective Russian control. Trump could turn out to be a security risk if he deliberately ignores the evidence of hostile Russian intentions and aggression that is being presented to him. We can assume that Senator Cotton will follow up on his comments to CNBC and watch Trump for changes in his approach to Russia. America will also be watching.