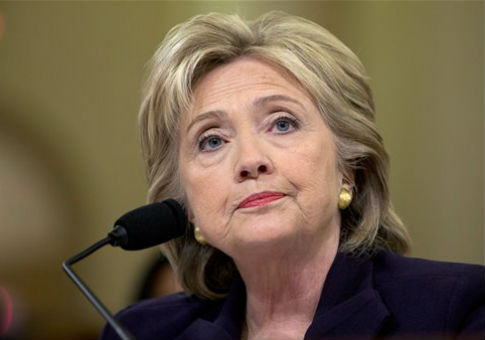 As deputy director of the Central Intelligence Agency, and later acting CIA director, Michael Morell was intimately aware of the intelligence following the September 11, 2012 attacks in Benghazi, Libya. In fact, he told Congress in 2014 that he personally removed the word “Islamic” from the CIA talking points in order to avoid inflaming Muslims worldwide.

Morell recently wrote an op-ed endorsement of Hillary Clinton in The New York Times. “First, Mrs. Clinton is highly qualified to be commander in chief,” writes Morell. “I trust she will deliver on the most important duty of a president—keeping our nation safe.”

Morell ignores one very important issue. As one-time head of the CIA, protecting the nation’s secrets should be of utmost concern to him. Yet Hillary Clinton trafficked in classified material on a regular basis for four years on an unsecured server, and never used a State Department server. She failed to turn over her emails when she left her job as secretary of state. And when this all became public as a result of inquiries from the House Select Committee on Benghazi, she turned over about half of all the emails on her server, while claiming that she had turned over all business related emails. FBI Director James Comey testified last month before Congress that they later found “thousands” of business related emails that she hadn’t turned over. In other words, she lied.

A State Department Inspector General report said that she never asked for, or got permission for, this email server set-up—and never would have gotten approval for it. We know she sent and received not just material classified as Confidential and Secret, but also Top Secret and Special Access Programs, an even higher category of classification. Her defense is that nothing was marked classified at the time she sent or received it. But while Comey acknowledged that some were marked classified, that doesn’t really matter. It’s her job to recognize classified material—which in most cases is obvious—and it is criminally negligent not to. Comey even called her actions “extremely careless.” It is very likely that her server was hacked, and that all or most of her emails are in the hands of our enemies. This is all okay with Morrell? Why shouldn’t these actions disqualify her from being commander-in-chief?

Morell calls Trump “an unwitting agent of the Russian Federation.” But what about Hillary? A proponent of the Russian reset, Mrs. Clinton pushed Americans and Russians to work on a project called Skolkovo, which the FBI later warned could jeopardize American national security. Let us not forget, as well, that Mrs. Clinton was part of a group of officials who signed off on the Uranium One deal, which led to the Russians owning 20 percent of U.S. reserve uranium, and tens of millions of dollars flowing into the Clinton Foundation.

The New York Times, and Morell, carefully omitted mention that he worked for Beacon Global Strategies—a PR firm that is advising Mrs. Clinton, according to PJ Media. “Morell comes across as apolitical, evenhanded and well-credentialed on matters of national security,” writes Liz Spayd, the public editor, or ombudsman, for the Times. “What the piece does not say is that he is a senior counselor at Beacon Global Strategies, a Washington consulting firm with connections to Hillary Clinton.”

“Two of the firm’s founders were top aides to Clinton, including Philippe Reines,” Spayd continues. “Leon Panetta, who led the Defense Department and, later, the C.I.A. under President Obama, is also with the firm.” Panetta also was White House Chief of Staff under President Bill Clinton.

Ms. Spayd, who has only been in her current position with the Times since May, could be flirting with trouble. She also was critical of the paper for its failure to cover Hillary’s recent disastrous performance on Fox News Sunday, during which Mrs. Clinton claimed that FBI Director Comey had confirmed her claims about her private email server as “truthful.” Spayd clearly knows that the Times is all in for Hillary, in both the news and editorial sides of the paper. So her reporting comes as a bit of a pleasant surprise.

The thing is, Morell is hardly apolitical. We previously exposed how he had lied about the facts of Benghazi in his book, The Great War of Our Time, claiming that the attackers had “small arms; many were not armed at all” and that “no heavy weapons were seen on the videotape.” The authors of Under Fire, which recounts the attacks, say that the attackers were actually carrying rocket-propelled grenades (RPGs).

Morell has been caught in other lies as well. “Under questioning from the senators about the talking-points editing process, Morell tried to blame the FBI for cutting the reference to al-Qa’eda terrorism; he said the FBI didn’t want to compromise an ongoing criminal investigation,” wrote Citizens’ Commission on Benghazi member and former CIA officer Clare Lopez. “When [Senator Lindsey] Graham [R-SC] called the FBI and told them what Morell had said, ‘they went ballistic,’ Graham said in an interview with Fox News. Confronted with this, Morell changed his statement and admitted that he, and the CIA, had been responsible after all.”

Now Morell is suggesting that the United States government make the Iranians and Russians “pay a price” for what they are doing in Syria which “would mean killing Russians and Iranians,” reports CBS News. “I want to go after those things that Assad sees as his personal power base. I want to scare Assad,” said Morell in the interview with Charlie Rose of CBS This Morning.

One might be reminded of the NATO air strikes on military bases and other enclaves of power held by Libyan leader Muammar Qaddafi—actions designed to aid the rebels and bring about Qaddafi’s overthrow. As Jake Sullivan, aide to Mrs. Clinton, wrote, she has “leadership/ownership/stewardship of this country’s Libya policy from start to finish.” Is there a similar interventionist plan in the works for Syria?

Ironically, Mr. Morell argued back in November 2015 that the United States government should work with Assad to have the Syrian military eliminate ISIS. “This is a very complicated situation, but I do think the question of whether President Assad needs to go, or whether he can be part of the solution here, we need to look at again,” saidMorell on CBS Face the Nation.

Now Mrs. Clinton has signaled the desire to get aggressive with Syria, and Morell is following suit. Her foreign policy advisor Jeremy Bash, according to the UK Telegraph, has said that “Hillary Clinton will order a ‘full review’ of the United States’ strategy on Syria as a ‘first key task’ of her presidency…”

Nicholas Kristof calls Syria “Obama’s Worst Mistake” in a New York Times column which is peppered with praise for Obama in other areas. But he points to the nearly half a million deaths there in five years, and blames, in part, Obama’s “dithering,” comparing this to Rwanda in the 1990s and Darfur in the 2000s, and arguing that this has had the effect of “casting a shadow over [Obama’s] legacy.”

Try as they might, it is difficult to separate Obama’s foreign policy from Hillary’s. She was secretary of state when the decisions were made in Libya, where in March 2011 Qaddafi’s top military leaders offered truce talks leading to his possible abdication under a white flag of truce, which the U.S. government ignored. Instead, the Obama administration effectively switched sides in the war on terror by aiding al-Qaeda-linked rebels, ultimately betraying those on the ground in Benghazi who needed our government’s help as they came under a terrorist attack.

Libya was left a failed state, as arms flowed into Syria, fueling ISIS and the seemingly endless civil war. Our total withdrawal from Iraq in December 2011 created a political and security vacuum, demonstrating what that part of the world is like without American leadership. The stakes are extremely high, and it’s pretty clear that both major parties have chosen candidates who are seriously disliked and not trusted by a significant majority of the voting public.

Roger Aronoff is the Editor of Accuracy in Media, and a member of the Citizens’ Commission on Benghazi. He can be contacted at rog[email protected]. View the complete archives from Roger Aronoff.