“Two state election boards have been popped, and data has been taken. This certainly should be concerning to the common American voter.” – Rich Barger, chief intelligence officer for ThreatConnect, a cybersecurity firm

The Federal Bureau of Investigation has warned that “foreign hackers penetrated two state [later identified as Illinois and Arizona] election databases in recent weeks,” as first reported by Michael Isikoff at Yahoo News. The FBI alert “comes amid heightened concerns among U.S. intelligence officials about the possibility of cyberintrusions, potentially by Russian state-sponsored hackers, aimed at disrupting the November elections.”

“…one of the IP addresses listed in the FBI alert has surfaced before in Russian criminal underground hacker forums.”

END_OF_DOCUMENT_TOKEN_TO_BE_REPLACED 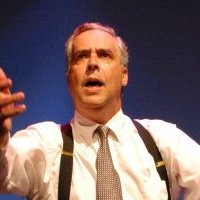 Harlan Baker is a long time leading member of the Democratic Socialists of America in Maine.

Baker was an adjunct lecturer for the Theater Department for the University of Southern Maine where he taught for over a quarter of a century.

He is a former Democratic member of the Maine state legislature, where he served on the Joint Standing Committee on Labor.

Baker served in the Maine State Legislature from 1979-1988. He sponsored legislation dealing with worker-owned cooperatives, municipally-owned power districts and a state-owned bank. He was the sponsor of legislation to divest state pension money from business investing in South Africa during Apartheid.

As an actor he has performed with numerous professional theater companies throughout New England.

Harlan Baker performed a scene from his one man play, Jimmy Higgins, it Monument Square at an Occupy Portland event in 2011.

During the summer and fall of 2006, Democratic Socialists of America Political Action Committee helped DSA activists around the country, “from San Diego up to Maine,” to host house parties to raise funds that helped Bernie Sanders become the only open socialist in the U.S. Senate.

Harlan Baker (Portland Maine) was a Democratic Socialists of America, Bernie Sanders delegate to the 2016 Democratic National Convention in Philadelphia.

Over 300 Sanders activists attended Democratic Socialists of America’s “Socialist Caucus” on Wednesday afternoon, July 27th, 2016. In the audience were over 100 Sanders delegates, including most of DSA’s 55 member-delegates; they were joined by Larry Sanders, Senator Sanders’ brother, and the Senator’s son, Levi Sanders.

“I’m enthused about Bernie’s campaign because for the first time in my life I get to support a presidential campaign that has taken socialism out of the closet.”