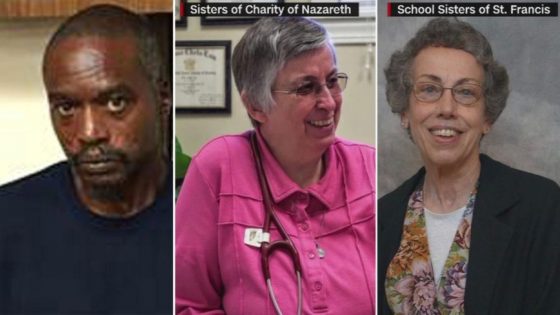 Except for the picture of the perpetrator, consumers of the media would have no way of knowing that the alleged killer of two white nuns in Mississippi is black. A picture tells a story. But isn’t it interesting that the racial composition of the victims and the perpetrator is not being emphasized in the actual stories of this black-on-white criminal assault?

Because the two murder victims were nuns, the crime made national news. But now that the alleged killer has been arrested and charged and shown to be black, you can bet the coverage will taper off.

Our media highlight white cops shooting black youth. But a black criminal killing two white elderly women is something to be toned down.

ABC news referred to the “the man,” Rodney Earl Sanders, 46, of Kosciusko, Mississippi, “who has been charged with two counts of capital murder” in the case. He allegedly stabbed the nuns—who were registered nurses and served the local community with free healthcare—to death.

The nuns were 68 and killed in their home.

At a time when liberals are complaining about mass incarceration and Obama is emptying the prisons through his pardon power, ABC reports that Sanders has a criminal record and was on probation. If he had been locked up, the nuns would still be alive.

Black CNN reporter Faith Karimi said, “A man has been arrested in the stabbing deaths of two nuns whose bodies were found in their home in rural Mississippi, authorities said.” Notice the omission of the racial characteristics of those involved.

What about, “Black Career Criminal Charged in Stabbing Deaths of White Nuns?”

If a white man had killed two black women, especially if the white man had been a cop, you can bet the race of the perpetrator would have been highlighted.

The national news coverage given to the nuns’ murder puts Hillary Clinton in a dilemma. She had apologized to the Black Lives Matter movement for once calling black career criminals “super predators.”

At the time, we noted two other cases of brutal black on white violence:

More than a year ago we published Jim Simpson’s masterful report, “Black Criminals, White Victims, and White Guilt.” He examined the facts about black-on-white crime.

Hill idolizes Assata Shakur, a former Black Panther and member of the Black Liberation Army, who killed New Jersey State Trooper Werner Foerster by shooting him in the head. She escaped from prison with the help of the Weather Underground and now lives in Cuba.

Incredibly, in addition to getting paid by CNN, Hill is a Morehouse College Distinguished Professor of African-American Studies. His new book is titled Nobody: Casualties of America’s War on the Vulnerable, from Ferguson to Flint and Beyond.

The “war on the vulnerable” implies that “the man,” aka the white power structure, is behind problems in the black community.

This is how blacks are advised to shift the blame for their own bad behavior to America.

During one of his many appearances on CNN, Hill claimed that black criminal predators were motivated to steal, rape and kill other people because of lead in paint and lead in gasoline. He got this information from Mother Jones magazine, which failed to show proof that excessive lead causes crime of any kind. Lead can cause headaches, memory problems, muscle and joint pain, abdominal pain, cramping and vomiting, but not crime.

CNN calls Hill “one of the leading intellectual voices in the country.” An online publication called the Afro goes further, saying he is “one of the most dynamic Black intellectuals of the 21st century.”

No wonder the black community is in trouble.

The major media outlets, which regularly censor news of black-on-white crime, faced a problem in the coverage of the black criminal killing the white nuns. They had to use the perpetrator’s photo. It was the only one they had. It was furnished by theMississippi Department of Public Safety.