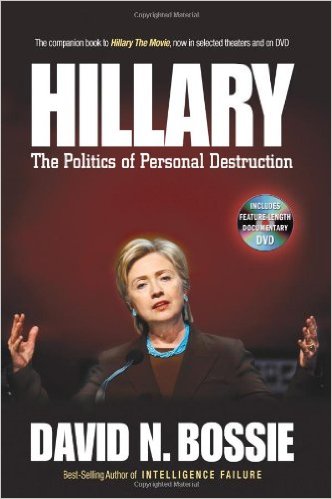 Pulitzer Prize-winning Washington Post journalist David Maraniss passed up the opportunity to win another journalism award eight years ago when he covered up Barack Obama’s personal relationship with communist Frank Marshall Davis. He figured it was better for Obama to win the presidency than for the truth to come out.

Another example of media bias can be found in the Ruth Marcus column on Donald J. Trump’s new deputy campaign manager, David Bossie, a solid conservative with a proven track record of investigating the Clintons. Marcus, who is married to former Obama official Jon Leibowitz, realizes that Bossie has the inside story about Clinton corruption and that he must be discredited. But the hit job she turned in for the Post was amateurish.

Apparently short on time, she Googled all of the bad stories she could find in the Post and strung them together in one column. She was especially upset about how Bossie did such dastardly things as investigate the suspicious “suicide” of former Clinton White House lawyer Vincent Foster.

Unfortunately for Marcus, her column appeared on the same day that the FBI released documents from its investigation of Mrs. Clinton, disclosing that she couldn’t remember getting a State Department briefing on how to handle classified information. In 2009, she had signed a form insisting she had gotten such a briefing. The FBI noted that the sickly Mrs. Clinton had suffered a concussion and a blood clot, and was only working a few days a week.

So either Mrs. Clinton was lying about the briefing or she was too sick to remember.

If she doesn’t know when she is lying, her medical problems may be causing her to black out and lose memory. As a staunch Democrat, Marcus should be leading the calls for her to withdraw from the presidential race, for Mrs. Clinton’s own sake and the sake of the party.

These embarrassing revelations make you wonder if the reports are true that Dr. Drew Pinsky’s popular TV show was cancelled by CNN’s sister network, HLN, because of his comments questioning Hillary Clinton’s health.

Using one of Ms. Marcus’s favorite research tools, I employed Google and discovered that a story about the cancellation of this show had appeared in, of all places, The Washington Post. Fred Barbash reported that the Pinsky show was cancelled “eight days after Pinsky’s comments on a radio show on Aug. 17 questioning the health and medical care” of Mrs. Clinton.

Pinsky came under such a strong attack that he apologized, saying he had “violated HLN and CNN’s editorial standards” and was wrong to have mentioned the “unsubstantiated report” about her health.

But that wasn’t enough to save his show. And now we find out that her medical problems have surfaced in the FBI documents. Pinsky may have understated the serious nature of Mrs. Clinton’s health problems.

To make matters worse for Mrs. Clinton, she had a massive coughing fit as she began a Labor Day campaign rally in Cleveland, Ohio, and then another coughing fit on her campaign plane.

Reuters recognized the blockbuster nature of the FBI documents, highlighting in the first paragraph of a story: “Hillary Clinton, under questioning by federal investigators over whether she had been briefed on how to preserve government records as she was about to leave the State Department, said she had suffered a concussion, was working part-time and could not recall every briefing she received.”

But Marcus seems more concerned about the investigations David Bossie has conducted over the course of his career. Perhaps the most serious investigation, one of life and death, involved the “suicide” of White House lawyer Vincent Foster, a close friend of Mrs. Clinton.

As we have previously reported, Trump’s suggestion that the death was “fishy” is proven by the facts in the case. Foster’s fingerprints were not found on the gun left at the scene, and the bullet that killed him was never found.

The Clintons are clearly worried about what’s coming next. Bossie knows why and where the bodies are buried.