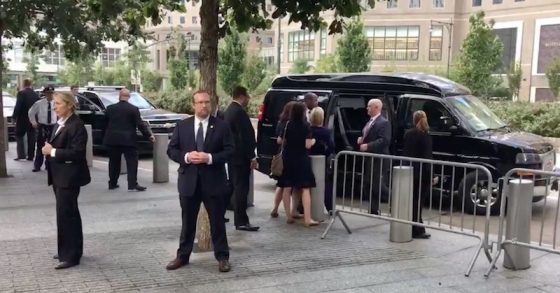 On Saturday, The Washington Post ran a story saying Donald J. Trump was a sexist for questioning whether Hillary Clinton looked healthy and fit. One day later, its email service known as “The Post Most” carried the news by Chris Cillizza, “Hillary Clinton’s health just became a real issue in the presidential campaign,” after she almost collapsed when leaving a 9/11 memorial service.

But it gets better than that. Just a few days earlier Cillizza, who is also an MSNBC political analyst, had written a story, “Can we just stop talking about Hillary Clinton’s health now?”

Phrases like “eating crow” and “egg on their faces” easily come to mind. But this particular controversy is more instructive than an “I told you so” from those questioning Mrs. Clinton’s physical and mental fitness for office.

Obviously, the critics were right and the Post was wrong. But don’t look for any apologies from the paper that brought down Republican Richard Nixon and covered up for Democrat Barack Obama in 2008.

Anybody paying attention knows that the Post is a liberal paper. But the cover-up of Mrs. Clinton’s health problems, and the attacks on Trump and other critics for raising this as an issue, demonstrate how utterly dishonest the paper has been about this issue. The public’s right-to-know was served by the video of the “overheated” Mrs. Clinton in a state of near-collapse. Even The New York Times was forced to post the video on their website. She was propped up and had to be helped into a car.

Citing FBI documents released in the Clinton email investigation, which noted her concussion, light work schedule and memory loss, we previously urged Post columnist Ruth Marcus to look into the matter, saying, “As a staunch Democrat, Marcus should be leading the calls for her to withdraw from the presidential race, for Mrs. Clinton’s own sake and the sake of the party.”

The Washington Post has a stable of reporters who could have investigated Hillary’s health problems. But rather than do that, it ran the first Cillizza piece and then a story by Matea Gold and Jenna Johnson that was titled, “Republicans warn that Trump’s critique of Clinton’s ‘look’ fuels accusations of sexism.”

In their 1,500-word article, the reporters said that “some of Trump’s surrogates have gone even further than him, promoting unsubstantiated or debunked theories about Clinton’s health.”

These are two “national political reporters” for the paper who used dubious sources to defend Mrs. Clinton from alleged “sexism” when they should have been digging into the story. It took a Clinton stumble and virtual collapse to finally get the facts into the paper.

What we are witnessing here is something that goes beyond knee-jerk partisan bias. Instead, the controversy involves marshalling the resources of a major newspaper to attack those who are raising the questions that the paper itself won’t tackle. This was a cover-up that didn’t stem from incompetence or laziness. Rather, it was a deliberate effort to intimidate those doing the research and the work that the press should have been doing.

The first explanation was that Mrs. Clinton was overheated, even though the temperature was around 80 degrees with low humidity. Then we were told by her doctor that her “cough related to allergies” has been complicated by “pneumonia,” which she was supposedly diagnosed with on Friday, and that she will rest and be back to normal soon.

Why should this latest explanation be believed?

What we do know with certainty is that the critics and the skeptics were correct, and that the liberal media defenders of Mrs. Clinton were wrong.

Those who refused to investigate Mrs. Clinton’s health problems have no credibility.

Another big loser in the controversy is the Snopes.com website, which purports to debunk falsehoods and insists that the claim made in a popular video by retired Dr. Ted Noel that the former First Lady may have Parkinson’s disease is false.

Strangely, Snopes declared, “We have not tried to make the case that Hillary Clinton does not have Parkinson’s disease (in point of fact, we don’t think that case even needs making).” It claimed Dr. Noel had exaggerated her “perfectly ordinary and explicable” health problems into Parkinson’s and that his motivation “was purely political.”

The trouble with this declaration, issued on September 9, is that the events of 9/11 have raised even more questions, and that those who were questioning her health have been proven correct. Simply put, Mrs. Clinton and her associates cannot be believed.

Political motivation or not, the issues raised in the Noel video are worth taking seriously, if the notion of “professional” journalist means anything.

Snopes admits the existence of an email to Hillary Clinton from a top aide about a drug called Provigil, which can be used to treat excessive sleepiness in patients with Parkinson’s, Alzheimer’s and multiple sclerosis. But the Snopes response includes the curious statement, “Are there Wikileaks e-mails indicating that Clinton specifically asked staffers to research Parkinson’s drugs? No (check for yourself).”

But what does that prove? Why would a staffer send an email of this nature to Clinton in the first place? Was there another email requesting the information that was destroyed? Will it be released by WikiLeaks in the future? We just don’t know.

Whether the drug is specifically for Parkinson’s or not, the official website for Provigilsays it is a prescription medicine “used to improve wakefulness in adults who are very sleepy due to one of the following diagnosed sleep disorders: narcolepsy, obstructive sleep apnea (OSA), or shift work disorder (SWD).”

In addition, research shows an association between Parkinson’s disease and narcolepsy.

“Clinicians who treat people with early-stage Parkinson’s disease should be on the lookout for symptoms of narcolepsy as many such patients are likely to develop excessive daytime sleepiness (EDS) as their illness worsens,” says a website known as the Psychiatry Advisor.

These are from simple Internet searches, designed to show that the questions in the Noel video are not beyond the realm of possibility.

The diagnosis that Hillary Clinton has Parkinson’s disease cannot be easily dismissed. It seems she does have symptoms of the disease, or something associated with it.

There are several weeks remaining in the campaign, providing an opportunity for the media to try to be objective in their news reporting and finally do their jobs.

Or will they double-down on defending Hillary and attacking Trump?