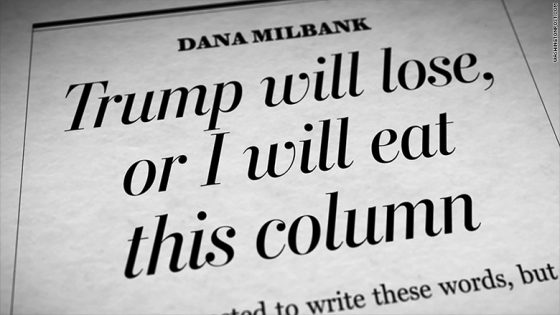 Aware that their credibility is shot with the American people, the publisher and executive editor of The New York Times sent a “To our readers” note on Friday, saying, “we aim to rededicate ourselves to the fundamental mission of Times journalism.”

This was another way of saying, “Sorry, we blew it,” without being honest with readers.

Those familiar with the paper’s “journalism” understand this to be media bias. But Arthur O. Sulzberger Jr. and Dean Baquet were suggesting something else—that something had gone wrong and they don’t quite know what happened, but don’t worry because the Times will get back to its mission of reporting truthfully.

Beating around the bush, they said Trump’s victory was “the biggest political story of the year,” which had “reached a dramatic and unexpected climax late Tuesday night…”

The word “unexpected” means that the paper’s predictions were wrong.

Then they said that the paper’s newsroom had covered the campaign “with agility and creativity,” which are terms for incompetence and bias. Some people cling to the old-fashioned idea that a paper should report events objectively.

Pretending to reflect on the poor coverage, they finally got to the problem without saying so directly. They asked, “Did Donald Trump’s sheer unconventionality lead us and other news outlets to underestimate his support among American voters?” and “What forces and strains in America drove this divisive election and outcome?”

In other words, Trump’s “sheer unconventionality” caused the paper to misreport what was happening. He had appealed to mysterious “forces and strains,” terms that apparently refer to the voters.

Sulzberger and Baquet insisted that the Times will “report America and the world honestly, without fear or favor, striving always to understand and reflect all political perspectives and life experiences in the stories that we bring to you.”

In other words, they blew it during the 2016 campaign and will try to do better next time. But nothing is really changing at the paper. Nobody is being fired. And nobody is being hired who has an understanding of the conservative electorate.

The paper, they said, will “hold power to account, impartially and unflinchingly.”

But who will hold The New York Times accountable?

In a real howler, they then claimed, “We believe we reported on both candidates fairly during the presidential campaign. You can rely on The New York Times to bring the same fairness, the same level of scrutiny, the same independence to our coverage of the new president and his team.”

This is another indication that the paper is hopelessly liberal, and that nothing will really change.

The business as usual attitude was reflected in the front-page headline in the Times after Trump won: “Democrats, Students and Foreign Allies Face the Reality of a Trump Presidency.”

As Accuracy in Media Chairman Don Irvine noted, the headline was even funny to various MSNBC personalities, because it focused on the disappointment of liberals at Trump’s victory, rather than the victory itself.

Mark Halperin commented, “If a Democratic candidate who was thought to have a 10 percent chance of winning by The New York Times that ended up winning, and winning red states as Trump won blue states, I don’t think that would have been the headline. And I’ll just say again, the responsibility of journalists is to not report on their biases. It’s to go out and understand the country through the prism of the election and say, ‘Why are people feeling the way they’re feeling?’”

Of course, the Times was not alone.

Consider the story in Politico headlined, “Insiders: Clinton would crush Trump in November.” It began, “In the swing states that matter most in the presidential race, Donald Trump doesn’t have a prayer against Hillary Clinton in the general election.”

In a story headlined, “The Democrat Media Complex Will Never Understand What Happened Tuesday Night,” Stephen Kruiser at PJ Media commented that the talking heads want desperately to avoid the topic of the “overwhelming lack of political and intellectual diversity in their ranks,” but that the problem of their liberalism is compounded by their laziness.

This is a fact, as reflected in my analysis of Post “journalist” Dana Milbank, who got caught asking Democratic Party officials for help on an anti-Trump column.

For his part, Milbank crafted another anti-Trump column after the Trump victory, in the form of a letter to his daughter. “This is a sad day for our country,” he told her. “I want you to know that I did everything I could to prevent this from happening. My efforts and those of many others came up short.”

Those “many others” were in the media and the Democratic Party, for whom Milbank worked. Perhaps Post owner Jeff Bezos ought to ask the Democrats to pay Milbank’s salary.

Milbank told his daughter, “You are going to be okay.”

That’s more than what we can say about Milbank. He is not okay. He is more than just a lazy liberal who gets the Democratic Party to help write his columns. He is completely out of touch with the America he claims to be writing about.

Like those at the Times, Milbank and others at the Post will never change. They are elitists whose hatred for their fellow Americans borders on mental illness.

Like other liberals, they claim to be on a crusade for “the children,” in his case his daughter. It’s frankly despicable that he would use his kid as a political prop. She needs our prayers.

Filmmaker Trevor Loudon’s new documentary The Enemies Within exposes the communist and radical Islamist background of the probable new leader of the Democratic Party.

With the endorsements of Senators Harry Reid, Chuck Schumer, Bernie Sanders and more than 250,000 signatures on an “Ellison for chairman” petition, Representative Ellison is the early favorite for the position.

Many writers have focused on Ellison’s Islamic beliefs, but few have examined his extensive Marxist connections.

Trevor Loudon’s The Enemies Within poses a simple question – “Could your Congressman pass an FBI background check?”

With close ties to both the Communist Party USA and several Muslim Brotherhood front groups, Trevor Loudon believes that Congressman Ellison would have no chance of passing even the most the rudimentary type of background check, applied to the most low-level federal government employees.

Yet within days, Representative Ellison may lead one of this country’s two main political parties.