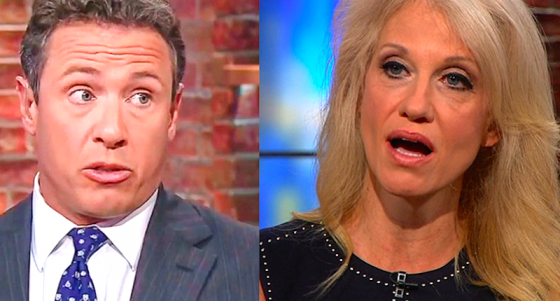 In announcing his challenge to Rep. Nancy Pelosi (D-CA) for leadership of the House Democrats, Rep. Tim Ryan (D-OH) used an old quotation, saying that the definition of insanity is to do the “same thing over and over again and keep getting the same results.” He meant that the Democrats keep losing seats with the same leaders and the same message. But the famous quote also applies to the liberal media, who use the same talking heads to make the same points over and over again, even after they were humiliated by Donald J. Trump on Election Day.

Interviewing former Utah Governor Mike Leavitt (R) on Monday on MSNBC, Kristen Welker of NBC News demonstrated how the bias works on a day-to-day basis. She contrasted the “impassioned” partisan plea from the cast of the Broadway show “Hamilton” to Vice President-elect Mike Pence with the president-elect’s “Twitter storm” in response. She wondered if Trump’s tweets were presidential, but did not question if it was appropriate for the “Hamilton” cast to use their production for political purposes. Leavitt gave a diplomatic answer, saying Twitter was a new way for a president to communicate.

It is also a very effective way. The media know it and don’t like it. In just a few words, Trump can effectively expose liberal bias. He called the show “overrated” and said the crew had harassed Pence, adding, “The cast of Hamilton was very rude last night to a very good man, Mike Pence. Apologize!”

On CNN, anchor Chris Cuomo was troubled by Trump’s use of Twitter in response to the “Hamilton” controversy. His former campaign manager Kellyanne Conway replied, “Why do you care?”

It’s a good question, and she knows the answer. She noted that Trump is “just trying to cut through the nonsense” of what the media and other opponents of Trump want people to believe.

Trump beat the media, as well as the Democrats, on Election Day. Of course, the emails from WikiLeaks demonstrated that they are one and the same.

In this context, Politico is emerging as one of the most dishonest publications in the Trump era. A Politico story by Kelsey Hutton about media collusion with the Clinton campaign said, “most of the correspondences revealed by WikiLeaks consisted of reporters asking for comment, setting up in-person meetings and trying to get information from sources, which is a reporter’s job.”

AIM’s Spencer Irvine noted that the WikiLeaks e-mails exposed how the liberal media establishment “has worked almost hand-in-hand with the Hillary Clinton campaign.” He cited ten examples, including:

A “hack” is usually defined as a person who is supposed to be a professional but does mediocre work.

Another Thrush email to Podesta about an Obama White House story said, “you are in the thing…in a good way…but could really use your insights…sorry to be a pain in the ass.” This is not asking for comment. It constitutes flattery, in the context of assuring him that he’s already covered “in a good way” and begging for more quotes.

Politico has a media reporter, Jack Shafer, who tried to rationalize much of the collusion in a story that carried the headlines, “WikiLeaks and the Oily Washington Press. A bunch of reporters got caught up in the Podesta flypaper. How bad is it, really?” The final headline suggested it was much ado about nothing.

He admitted that Politico reporter Glenn Thrush sent Podesta “a chunk of his story-in-progress,” but that he was among many reporters who “appear to have conned their way into the inner sanctums to produce creditable work that is accurate and useful to readers.” He added, “What appear to be compromises ultimately redound to their favor.”

In other words, Thrush was acting like a sycophant just to get information. Is this what modern journalism has become? What happened to speaking truth to power?

Shafer said, “In my own journalism, this isn’t how I work: I don’t give my sources a sneak preview of what I’m writing—unless the topic is technical and complicated (law, medicine, science, tech, et al.) and demands an expert’s checkmark.”

Nevertheless, there has been no apology from Politico senior management over Thrush’s pathetically subservient coverage of the Democrats. They will just move on, doing the same thing over and over again, hoping that we will all forget what they have done.

In the wake of communist-fueled anti-police sentiment resulting in relentless, brutal attacks on America’s law enforcement officials, a look at prospective DNC leader Keith Ellison‘s radical anti-police and anti-capitalist history is in order.

As Trevor Loudon reveals in his film the Enemies Within, Keith Ellison is a “perfect example of the Muslim/Marxist alliance.” In his “student radical days,” the young Marxist was condemning capitalism and “police brutality” around the same time he converted to Islam. In 1989, Keith Ellison was featured in “Forward Motion,” the now-defunct print magazine of the Freedom Road Socialist Organization – the same group that eventually spawned the “Black Lives Matter” movement.

The article was titled “Battling the Rise in Police Brutality” and is not found online.

In the article, Ellison lashed out at “white supremacy” and “capitalism” as being responsible for drug use by black Americans:

Ellison expressed concern later in the same article that working with organized labor may lead to a “white supremacist problem.”

Here, Keith Ellison discusses the “contradictions” surrounding how those in the progressive movement to convince black Americans that “white supremacy is an evil system” are “predominately white.”

The late communist party member Erwin Marquit explains in his memoirs how the radical left worked to elect Keith Ellison in 2006:

“To gather support for Ellison, I suggested to [Communist Party USA members] April Knutson and Jim Knutson that they draft a letter addressed to activists in the peace movement urging them to support Ellison.

Doris and I and the Knutsons then solicited signatures to the letter from among well-known peace activists. In July, we circulated the letter as widely as possible. Doris and I volunteered to cosponsor a fundraiser for Ellison in our home on 24 July with our neighbors Dave Holets and his wife Nancy Arneson. Dave, already retired, had been in charge of managing the finances of the School of Physics and Astronomy. Together, we leafleted the immediate neighborhood with invitations to the fundraiser.

On 21 and 22 July, I went into St. Louis Park, a suburb just west of the city line, a block and a half from our home, to do door knocking. When someone appeared at the door, I would begin by introducing myself by name. I was not surprised when one of the first responses I got was, “Oh, you’re the Communist at the University of Minnesota.” Two or three others recognized me in a similar manner. The fact that I was campaigning for Ellison did not seem to bother any of them.” (emphasis added)

Watch this clip on Keith Ellison from Trevor Loudon’s film, The Enemies Within: