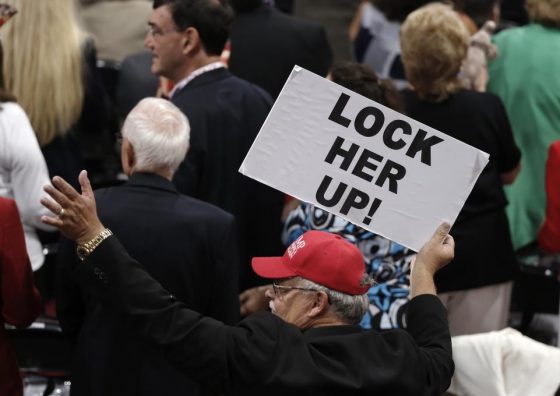 Hillary’s post-election speech about fake news was beyond the pale; the height of arrogance and deceit. Her wickedness makes my skin crawl. Blaming fake news for her loss, this deplorable woman had the chutzpah to say, “…it’s now clear that so-called fake news can have real-world consequences. Lives are at risk, lives of ordinary people just trying to go about their days to do their jobs. Its a danger that must be addressed.” http://bit.ly/2h2tmOz

Knowing how the Democrats roll, Hillary saying fake news is “a danger that must be addressed” is yet another attack on free speech, justifying government censorship and regulations. Why are leftists called liberals when they are power obsessed control freaks?

Meanwhile, Hillary and her leftist minions planted, watered and nurtured fake news which continues to reap them a bountiful harvest of racial hate and division. Hillary and Company’s fake news has painted a bright red bulls-eye on the backs of America’s police; our brave men and women in blue. http://bit.ly/2gQiFLW

Hillary’s long list of lies which have devastated lives and even led to the deaths of Americans are well documented. http://bit.ly/2hDfZRH And yet her fake news speech emitted an air of moral superiority. Clearly, Hillary will continue lying and deceiving the American people for as long as she can get away with it – no remorse, no humility and no humanity.

Some have advised President-Elect Trump not to pursue further investigation of what a former FBI agent called the Bill and Hillary Clinton “Crime Family.” http://bit.ly/2eY7wuY I was pretty neutral on the issue. After hearing her nose-up-in-the-air fake news speech, I say, let the law follow its course.

The average jail time for a kid possessing a small amount of drugs is 3 years. Why should Hillary walk with multiple crimes that jeopardized national security? Everyone knows she became filthy rich by selling influence to whomever from banks to foreign governments. http://bit.ly/2a3hwSY

Knowing that the mainstream media has her back, Hillary dared to boldly come to the national microphone and preach to us about fake news. Truly repulsive.

Please do not think I am advocating locking her up without following the legal process; indictment, trial and being found guilty. Some are saying it would be politically wise to give Hillary a pass; not pursuing further investigation. I disagree. The woman is like Jason and Michael Myers in those horror movies. Her fake news speech confirms that unless she is stopped, Hillary will relentlessly keep coming back; finding new ways to attack our freedom and liberty.

Move forward with the investigation Mr President! If all proceeds as the evidence so far leads, lock her evil crooked condescending derriere up!