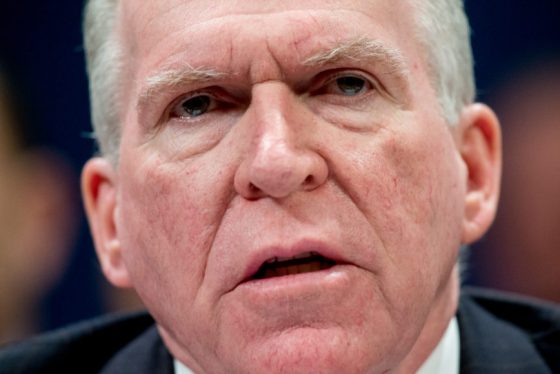 You couldn’t fault Donald J. Trump for concluding that the CIA is out to get him even before he starts his presidency. Former CIA officials Michael Morell, Michael Hayden and Philip Mudd have all denounced him. Plus, former CIA operations officer Evan McMullin ran against him as an independent presidential candidate.

Obama’s director of the CIA is John Brennan, who recently disclosed that he voted for the Communist Party (CPUSA) ticket when he was in college. He was hired by the CIA anyway and quickly rose through the ranks, even though the CPUSA was funded by Moscow and known to provide cover for Soviet espionage activities.

The liberal media haven’t made Brennan’s disclosure into a scandal and didn’t call for any investigations of Obama’s CIA.

Clearly, having an “intelligence” connection doesn’t mean you are intelligent or have good judgment. Making “America First” is not a requirement for serving in the CIA and other intelligence agencies. You can have numerous skeletons in your closet and even be a transgender. If you have any doubts, consider reading the CIA’s “Diversity and Inclusion Strategy (2016-2019).” It is Brennan’s masterpiece.

The line-up of former CIA personnel opposing Trump sounds impressive, except when you consider the fact that the CIA has a habit of getting things wrong. Democratic Senator Daniel Patrick Moynihan, a former vice-chairman of the Senate Select Committee on Intelligence, once declared that “for a quarter century, the CIA has been repeatedly wrong about the major political and economic questions entrusted to its analysis.” Moynihan had introduced a bill to abolish the CIA. The late Lt. Gen. William Odom, then-director of the National Security Agency (NSA), said the CIA should be disbanded.

Trump critic Michael Hayden, who served as director of both the NSA and CIA, was on a list of “former national security officials” from Republican administrations who announced they wouldn’t vote for Trump. He was once photographed at a gala with former CIA and NSA analyst Edward Snowden, who stole and released classified information and is now living in Russia. Hayden can’t be faulted personally for that betrayal. But Snowden and other spy cases have to be considered when judging the reliability of products from the intelligence community, especially when they are transmitted anonymously through the press.

Under the headline, “CIA Judgment On Russia Built On Swell Of Evidence,” The New York Times reports that “many believe” there is “overwhelming circumstantial evidence” that the Russians tried to help Trump. The paper said “the conclusion that Moscow ran an operation to help install the next president is one of the most consequential analyses by American spy agencies in years.”

Such analyses can mean nothing and can, in fact, divert the attention of elected officials from the truth. Trump calls the verdict on alleged Russian involvement in the election “ridiculous.” It would not be the first ridiculous work product from the intelligence community. The CIA failed to predict the Soviet “collapse,” and then mistakenly assumed the collapse was real and not a strategic deception.

It is significant that The Washington Post, owned by Amazon billionaire Jeff Bezos, broke the story about the CIA allegedly concluding that the Russians had somehow meddled in the U.S. elections by hacking into Democratic Party computers. The CIA has a $600 million contractwith Amazon Web Services.

Former Post publisher Katharine Graham reportedly gave a speech in 1988 at the CIA headquarters, where she said, “We live in a dirty and dangerous world. There are some things that the general public does not need to know and shouldn’t. I believe democracy flourishes when the government can take legitimate steps to keep its secrets and when the press can decide whether to print what it knows.”

If this was the case under Graham, the previous owner of the Post, how likely is it that such a relationship continues under an owner of a company that does business with the CIA?

Interestingly, Amazon CEO Bezos plans to attend President-elect Donald Trump’s meeting of tech-industry executives this Wednesday in New York. Perhaps Trump will ask Bezos whether the Post is being manipulated by political partisans in the Intelligence Community.

Trump has tweeted, “Can you imagine if the election results were the opposite and WE tried to play the Russia/CIA card. It would be called conspiracy theory!” Or “fake news.”

In response to the CIA’s reported findings, the Trump transition office raised the matter of another mistake: “These are the same people that said Saddam Hussein had weapons of mass destruction.”

The discredited analysis concluding that Saddam had weapons of mass destruction (WMD) is most closely associated with former CIA director George Tenet. A Clinton holdover, Tenet had told President George W. Bush that finding WMD was a “slam dunk.” He was photographedgiving an award to then-DIA intelligence analyst Ana Montes, who turned out to be a Castro spy. Again, Tenet is not personally responsible for this betrayal. But it is one of many spy cases that have corrupted the Intelligence Community.

President Bush’s problem was that he failed to clean house in the Intelligence Community before the war.

After he takes office, Trump should immediately clean house in the CIA and other intelligence agencies. But it may be the case that the charges being directed against him at the present time are designed to prevent just that. If Trump cleans house, he will be accused in the press of trying to purge intelligence officials with evidence of a Russian plot to elect Trump!

The American people have been saddled with an Intelligence Community that is full of what are called “insider spies.” The situation is so bad that a special paper has been published about a novel new way to deal with traitors. The idea is to provide a “safe refuge” and a secret process of “reconciliation” for them without threatening long prison terms or the death penalty. In this manner, the American people would hear nothing about spies being arrested and the damage they have done.

We know that the media picked sides in the presidential contest. Now we are seeing more evidence of how the CIA picked sides, to the point of engaging in what is an obvious effort to bring down the Trump presidency even before it begins.

One thought on “The CIA’s War on Trump”