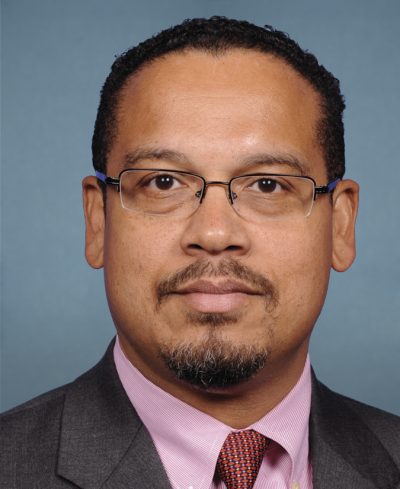 “Barack Obama is Louis Farrakhan and Karl Marx rolled into one.” Those were the words of businessman Zubi Diamond at a conference I sponsored back in 2011. That clever line might also apply to Rep. Keith Ellison (D-MN), a candidate for chairman of the Democratic National Committee (DNC). Obama and Ellison seem to be brothers in both ideology and approach. The combination of Black Muslim ideology and Marxism is something that courses through the veins of Obama and Ellison. So why is Obama opposing the Ellison bid?

The answer is that Obama is smarter than Ellison. Obama has watched his words more carefully, and concealed his ideological predisposition when he ran for president, while Ellison is out of the closet about it. He not only has links to the Black Muslims of Louis Farrakhan, but he defended a member of the Weather Underground spin-off, the Symbionese Liberation Army. Plus, he’s an outspoken critic of the state of Israel.

Obama had some of these same associations when he ran for president. But he had the benefit of a liberal media that were willing to lie and cover up for him. Adding another Obama, in the form of Keith Ellison, is just too much to expect, in terms of continuing this media bias and cover-up. Too much is already known about Ellison.

The other factor is that Obama has recently decided to emphasize the Marxism of his brand, as opposed to his pro-Muslim bias, and is promoting his Secretary of Labor Tom Perez as his choice for DNC chairman.

At his year-end press conference, Obama began talking about the “workers,” the cornerstone of the Marxist economic revolution, saying, “If you look at his body of work on behalf of working people, what he’s [Perez] pushed for in terms of making sure that workers get a fair deal, decent wages, better benefits, that their safety is protected on the job, he has been extraordinary.”

Obama is smart to emphasize the workers. He realizes that the Democrats lost the working class, and if the party has any hope of getting back into power in Congress or the White House, these workers have to be tricked into voting Democrat. The winning strategy, he thinks, is promising Big Government, rather than economic growth and better trade deals, as the solutions to their plight.

Obama must be thinking that Ellison, who wears his Muslim religion and black radicalism on his sleeve, is a loser as far as these workers are concerned. He’s right.

Those who believe that Marxism is dead should take a look at Jacobin magazine, which is openly Marxist and got the seal of approval from The New York Times for its cutting edge approach.

One Jacobin writer, Connor Kilpatrick, has written “On the White Working Class,” an examination of the Democrats’ dilemma. In the Rust Belt, he writes, the white working class voters “finally had enough of the Democrats and defected to Trump.” He writes, “While we hear constantly that they’re demographically dying out, white workers without a college degree remain at least 63 percent of the working class and in twenty years will still be a ‘mere’ 49.5 percent. That’s a ton of potential voters—they were 34% of Obama’s coalition—and yet few liberal pundits seemed to take notice.”

Kilpatrick says that the Democrats abandoned these workers, and that today “it’s an open secret that the party’s program is led by the affluent professional class at best and enlightened Silicon Valley billionaires at worst.”

These are the facts that Obama understands: the white working class doesn’t read The Huffington Post, and it is not attracted to the Black Muslim radicalism of Keith Ellison.

By contrast, with the title of Secretary of Labor, Perez has at least the appearance of favoring the working man and woman. The problem is that he is also an elitist with a racial prejudice against white people. A graduate of Brown and Harvard Universities, he was head of the Civil Rights Division of the Department of Justice before going to the Labor Department. As noted by The Washington Free Beacon, an investigation into the Civil Rights Division by the Department of Justice’s inspector general revealed that Perez “told investigators that white people were not entitled to protection under the Voting Rights Act.” The report of the investigation explains this bias in detail.

J. Christian Adams described his book, Injustice: Exposing the Racial Agenda of the Obama Justice Department, as “largely a catalog of the rancid racialism over which Perez has presided.” Adams was an election lawyer who served in the Voting Rights Section at the U.S. Department of Justice.

If this evidence against Perez gets national attention, it will sink any hope the DNC and the Democrats have in attracting white voters. But will the media bring it up?

The DNC choice is a reminder of the old saying that one path leads to a catastrophe and the other to oblivion. No wonder the Democrats have nothing better to do than play the Russian card against Trump.