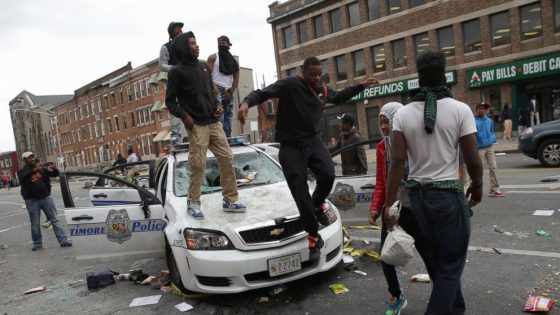 This is beyond offensive. Democratic Missouri Congressman Lacy Clay chose the painting below as part of the United States Congressional Art Competition. The so-called artist is David Pulphus and it is meant to depict the unrest in Ferguson, Missouri, where a police office shot Michael Brown. That officer wound up moving and ending his career over this even though he did nothing wrong. Brown charged him and he did what he was trained to do. Black Lives Matter and the left immediately began to push the “Hands Up, Don’t Shoot!” lie. That never happened, but tell a lie often enough and you’ll get a good number of useful idiots to believe you.

Pulphus paints the officers as pigs in his artwork. Two of the officers carry guns while protesters march towards them carrying signs that read “history,” “stop killing” and “racism kills.” It’s all kinds of wrong. It’s full of cop-hatred and racism, not to mention pent up violence. And my personal opinion is it just sucks as art. I guess I just don’t get BLM nuance. Pulphus’ artwork won first place in Missouri’s 1st Congressional District, so his painting now hangs in a tunnel between the Capitol building and the Longworth House Office Building. It should be in the trash.

The police have been demonized by the media and the left in this country over the last few years.

There is no question about that.

Some radical groups, like Black Lives Matter, have even called for the murder of police officers.

It’s been scary to watch.

You wouldn’t expect politicians and educated leaders to buy into the nonsense.

But that’s exactly what has happened.

Check out the picture that was approved to hang in the United States Capitol building.

A Missouri congressman has approved a painting that depicts cops as pigs to hang in the U.S. Capitol building. 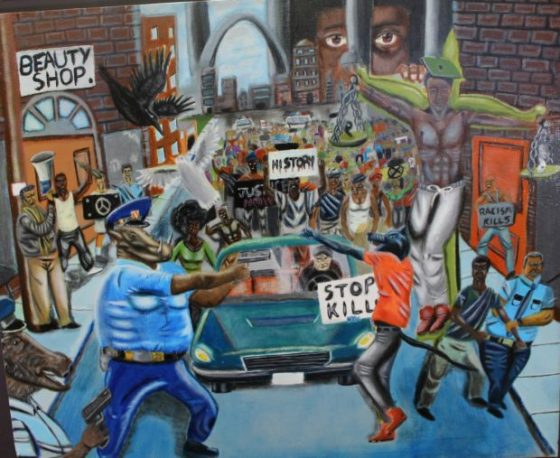 And the Democratic Congressman who approved the painting? He’s a piece of work himself. Rep. William Lacy Clay, Jr. is supported by the Communist Party USA and the Coalition of Black Trade Unionists. He’s part of the Progressive Caucus and the Black Caucus. Clay is a Marxist and a racist, so it figures he would be all in on this painting. He is a strong supporter of Black Lives Matter as well.

Clay praised the painting as a “colorful landscape of symbolic characters” in a press release. “The painting portrays a colorful landscape of symbolic characters representing social injustice, the tragic events in Ferguson and the lingering elements of inequality in modern American society,” the press release stated. Do tell… so you call cop-hatred colorful? Not everyone shares those sentiments… “Unfortunately, many people of influence have taken part in promoting offensive and inaccurate caricatures of the very people who do the most to protect our families,” Washington GOP Rep. Dave Reichert, a former police officer, told the Independent Journal Review.

A senior Republican congressional aide also blasted the artwork in a scathing statement provided to IJR:

“That a sitting member of Congress thought it was a good idea to honor the depiction of police officers as pigs — in the U.S. Capitol of all places — is reprehensible. I feel incredibly sad that the officers working nearby have to see this on the wall. These officers protect this congressman, his staff, and his office every day, never knowing if it may be their last. Meanwhile, he’s encouraging teenagers in his district to treat police officers as animals. It’s disgusting, and he should be ashamed. This hate masquerading as art needs to be taken down now.”

Naturally, Clay could not be reached for comment. He’s all for others threatening police officers, but when it comes to standing on his convictions, Clay seems to be more missing in action than activist at times. Clay also reportedly called the piece of art the “most creative expression that I’ve witnessed over the last 16 years” during remarks on the House floor.

It’s a massive disgrace that a painting depicting cops as pigs is hung in our Capitol. I’m fairly certain that if President-elect Trump has anything to say about it, that painting will be deep-sixed as it should be. 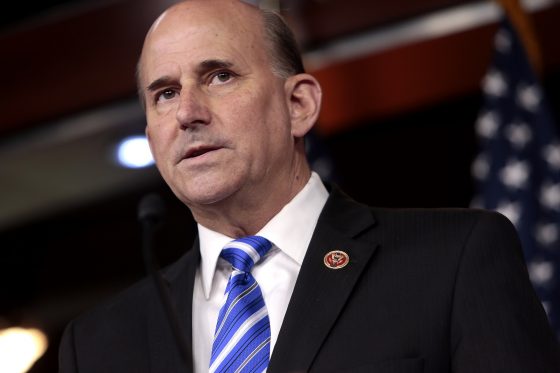 God bless Louie Gohmert. The conservative Texan Congressman is not only a principled man… he has a spine made of titanium. Gohmert is never afraid to speak his mind and did so on the Sean Hannity show concerning Barack Obama and John Kerry betraying Israel at the United Nations. This is how it is done… magnificent and well said. Slow clap.

Gohmert is now working on a bill to take away funding from the UN until they rescind their resolution on Israeli settlements and he noted that “they don’t need our help to be anti-Semitic.” He also wants to make it a crime to use any government money to recognize Palestine as an independent country or state. Amen to that… twice. He also bluntly stated that the Obama administration favors “the bullies over the victims. … Look at it, who have they given more money than anybody? Iran.” Exactly right. Obama hearts Islamic terrorist thugs over the Jewish state and America. Muslims of a feather. There, I said it.

Between Friday’s stab-in-the-back betrayal of one of the country’s closest allies and Wednesday’s insult-to-injury speech by Secretary of State John Kerry, President Barack Obama’s foreign policies are careening to the end of his term like a runaway train.

But a conservative Texas congressman wants to put on the brakes.

Rep. Louie Gohmert, the veteran Republican representative from the Lone Star State and an outspoken conservative leader in Congress, told Fox News’ Kimberly Guilfoyle this week he’s joining with conservatives in the Senate by preparing a bill to cripple the United Nations by cutting off U.S. money for it.

After Friday’s passage — with the approval of the Obama administration — of a Security Council resolution that brands Israeli an international criminal for building housing on its own territory, and Secretary of State John Kerry’s attack Israel for allegedly blocking the peace process, Gohmert said it was time to bring both the United Nations and the Obama White House to heel.

The bill he’s preparing, he said, has twin goals.

“One, we don’t give a dime to the U.N. until they rescind that resolution,” Gohmert said. “And people say, ‘oh, they’ll never do that.’ Fine, they don’t need our help to be anti-Semitic.

“The other is … making it a crime to use any government money to recognize Palestine as an independent country or state, because that’s what I keep hearing is going to be the next shoe to drop.”

Louie Gohmert has joined forces with another feisty Texan, Ted Cruz, to go after defunding the UN. Obama is trying to set America on fire on his way out of the White House. Attacking Israel in this fashion and stabbing them in the back is the most shameful act yet, in a long, long line of shameful acts. Cruz excoriated President Obama and his administration for its cowardice and proposed a unique retribution for the UN once President-elect Donald Trump takes office.

Cruz sharply criticized Obama and stated that we should “reconsider financial support for the nations that supported this resolution” and that it may be time to “significantly reduce or even eliminate US funding of the United Nations.” Agreed. And we should expel Palestinian diplomats as well. I notice that Obama is hot for the Russians, but does not mention the Palestinians, who are terrorists, at all.

“For eight long years, the Obama administration has worked systematically to undermine the nation of Israel,” Cruz wrote. “They actively worked to defeat Prime Minister Netanyahu, and illegally used US taxpayer funds to do so. Never has there been a more anti-Israel administration, and today’s United Nations vote is the culmination of their systemic agenda to weaken Israel and strengthen its enemies. Every Obama foreign policy official should be ashamed of today’s UN resolution, and any official who disagrees with or hopes to avoid the anti-Israel legacy of this administration should resign on principle today,” he continued.

More from Cruz: “I also emphatically second the call of my colleague Sen. Lindsey Graham that the consequences of this disgraceful UN resolution should be severe,” Cruz said. “I look forward to working with Sen. Graham, and with the incoming administration of President-elect Trump, to significantly reduce or even eliminate US funding of the United Nations, and also to seriously reconsider financial support for the nations that supported this resolution. For those who have put your name to this despicable attack on Israel, you did so with full knowledge of the consequences of your actions. And for those who acquiesced or facilitated the UN resolution- — especially President Obama, Secretary Kerry, and Ambassador Power- — history will record your abiding and shameful legacy undermining our friend and ally Israel,” Cruz added.

Gohmert and Cruz are right… cut off funding for the UN and anyone who supports their hatred of Israel. Stand by Israel for real and hit these anti-Semitic bastards where it hurts. In their wallet. Since the UN seems to hate Israel and America so much, cut off the $3 billion we give them directly every year and in fact, cut off the $8 billion we give to them and connected organizations annually. That money can be used on our southern border and to bring jobs back to our country. Make America great again… defund the UN.