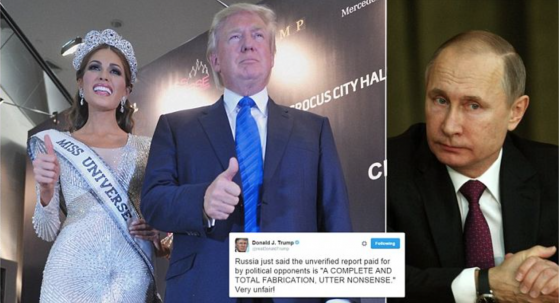 Intelligence allegations have surfaced against Donald Trump involving the Russians. My readers know that I consider Russia to be a stone cold enemy and I have been very concerned on how chummy Trump is with Putin, but just let me state for the record, I think all of this is bullcrap. I am linking the actual report here, so you can read it for yourself. It is 35 pages long. There are inconsistencies and downright errors in this. There are also allegations of Trump and prostitutes in Russia defiling a bedroom where the Obama’s stayed. I don’t believe a bit of it. The report is in the Russian style of mixing facts and fallacies, but it does not ring true. And I don’t believe that Donald Trump would ever be this stupid. This is a hatchet job from the left, not only against Donald Trump, but to make our intelligence agencies look like fools.

Russia is denying all of this completely and Donald Trump is saying it’s an outright lie. I believe them and considering how I feel about Russia, that should mean something. The media and the intelligence agencies have had this information since August. So, why wouldn’t they release it until now? I know Harry Reid wanted to air it, but they sat on it. Now, the left wants to use it to destroy Trump as he comes into the Presidency. Very convenient, don’t you think? And I have much more for you on this.

Russia has denied ‘completely fake’ allegations that it has a blackmail file on Donald Trump containing footage of him watching prostitutes in a Moscow hotel bed.

U.S. officials allegedly included a two-page synopsis of ‘kompromat’ – Russian for compromising material – as part of their security briefing of Trump on Friday.

The material, described by Trump as ‘fake’ and a ‘political witch hunt’, was based on memos compiled by a British intelligence operative who was considered ‘credible’ by the U.S. intelligence community, CNN reported.

The document claims Russian sources told the operative that they had extensive material on the now president-elect – including a secret film of him in the suite where President Obama stayed in Moscow, watching prostitutes committing degrading sex acts on the bed where the president slept.

But Dmitry Peskov, the spokesman for Russian President Vladimir Putin , dismissed the reports as a ‘complete fabrication and utter nonsense’.

What is believed to be the 35-page document itself was published by Buzzfeed, which pointed out that it contained errors. Little of its contents can be independently verified, while there has been no official confirmation of the details of the briefing.

Denying even the existence of a ‘kompromat’ on Trump, Peskov said this morning: ‘This information does not correspond to reality and is no more than fiction.’

A so-called anonymous retired MI6 British intelligence officer gave this damning evidence to John McCain, who then provided it to the FBI. The left is now screaming that Comey should be lynched because he went after Weiner and did not go after this. There is a good reason he didn’t go after this… it smells of being a political witch hunt. Don’t get me wrong… Russia does blackmail, extort and murder… but it would not be done this way. There is no credible evidence out there that Trump is controlled by Russia. I’ve looked… hard and I have not found it. So, until I see real credible and verifiable evidence, I’m not going to defame the man.

Donald Trump won this election fairly and Russia had nothing to do with Clinton losing. She sucked… period. According to CNN, the briefings, which included the documents of incendiary material, were presented by the country’s most senior intelligence chiefs – Director of National Intelligence James Clapper, FBI Director James Comey, CIA Director John Brennan, and NSA Director Admiral Mike Rogers. But they are all yet to comment on the matter. They are all going to wind up looking like utter fools over this, although they didn’t present it as facts, just evidence Russia was meddling.

Tell me what you think this sounds like – it is repulsive and frankly, not credible:

The document states that Trump had declined ‘sweetener’ real estate deals in Russia that the Kremlin lined up in order to cultivate him. The business proposals were said to be ‘in relation to the ongoing 2018 World Cup soccer tournament’.

Russian authorities tried to ‘exploit Trump’s personal obsessions and sexual perversion’ in order to compromise him.

The document also referenced Trump’s ‘(perverted) conduct’ at the presidential suite of the Ritz-Carlton hotel in Moscow, where the President and First Lady Michelle Obama ‘whom he hated’ had stayed.

It cited ‘Source D’ as saying Trump’s conduct included hiring prostitutes ‘to perform a ‘golden showers’ (urination) show in front of him.’ It says the hotel was known to be under the control of Russia’s FSB, with hidden cameras and microphones.

Now, here is where the CIA, FBI and every other alphabet agency may have been rick-trolled by the left. A post on 4Chan now claims that the infamous “golden showers” scene in the unverified 35-page dossier, allegedly compiled by a British intelligence officer, was a hoax and fabricated by a member of the chatboard as “fanfiction,” then sent to Rick Wilson, who proceeded to send it to the CIA, which then put it in their official classified intelligence report on the election. They didn’t source it, they just included it. Unbelievable. 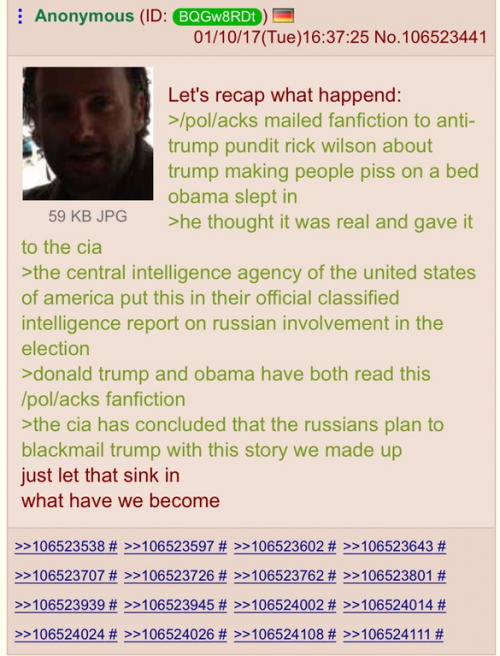 Now, I don’t know if that is true… just as I don’t know if the whole thing is a made up smear job against Trump. But, it has the feel of being true. You’ll have to judge for yourself. Here’s a summary of what may have gone down:

On january 10, Buzzfeed posted a story under the byline of Ken Bensinger, Mark Schoofs and Miriam elder titled “these reports Allege Trump Has Deep Ties To Russia” and posted a link to a document alleging, among other things, that russia has been cultivating trump for 5+ years, that trump has been in constant contact with the kremlin for information on his opponents, and perhaps most inflammatory, that there are many recorded instances of blackmail of trump in sexual misconduct. A prominent claim is that trump rented the presidential suite of the Ritz Carlton Hotel in moscow, where he knew that the Obamas had slept in; he them hired a number of prostitutes to perform a ‘golden shower’ (pissplay) on the bed and in the room. https://www.buzzfeed.com/kenbensinger/these-reports-allege-trump-has-dee…
https://assets.documentcloud.org/documents/3259984/Trump-Intelligence-Al…

Noted #nevertrump voice Rick Wilson later commented on twitter, stating that the report “gave a new meaning to Wikileaks” (https://twitter.com/TheRickWilson/status/818982395202379777) and that the report was the reason everybody was fighting so hard against the election of Trump. (https://twitter.com/TheRickWilson/status/818983514335047680)

The remarkable thing? It’s all fake. And not only fake; it’s a prank perpetuated by 4chan, on Rick Wilson himself. A post on 4chan on october 26 stated “mfw managed to convince CTR and certain (((journalists))) on Twitter there’ll be an October surprise on Trump this Friday” along with a picture of a smug face with a hash name. http://archive.4plebs.org/pol/thread/94704894/#94705224

on november 1, a person without a picture but is assumed to be the same person posted “So they took what I told Rick Wilson and added a Russian spy angle to it. They still believe it. Guys, they’re truly fucking desperate – there’s no remaining Trump scandal that’s credible.” https://archive.4plebs.org/pol/thread/95568919/#95571329

on january 10, moments after the story broke and began to gain traction on social media, a person with the same smug grin face, and the same hash title for the picture, stated “I didn’t think they’d take it so far.” http://boards.4chan.org/pol/thread/106514445#p106520376

This story has taken on something of a life of it’s own. Going through Rick Wilson’s twitter, you can find many different stories from the time that he had shown the story to a wide number of anti-trump news sources, trying to find a news organization that would actually publish the story. During that time period, he referred to it often as ‘the thing’, and often playing coy with followers on the content with the story with anybody who was not also a #Nevertrumper. Unconfirmed sources has people as high up as John McCain giving the story to FBI Director James Comey to attempt to verify the story. Given that Rick Wilson runs in Establishment circles, it is not an impossible scenario that long-serving senators are falling for what amounts to a 4chan troll trump supporter creating an ironic October Surprise out of wholecloth to punk a GOPe pundit who derogatorily referred to them as single men who masturbate to anime.

This whole thing is a horrid joke and what is worse, it takes fake news to a new level and it makes anything coming from the intelligence agencies questionable. Just what Barack Obama and the left wanted all along. It will also follow Trump and hound him throughout his presidency even though it is a lie and a smear campaign. As for CNN and BuzzFeed… doesn’t anyone source their stories for real facts anymore? Just asking. 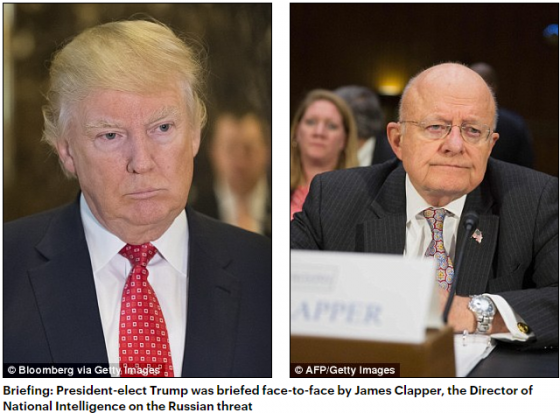 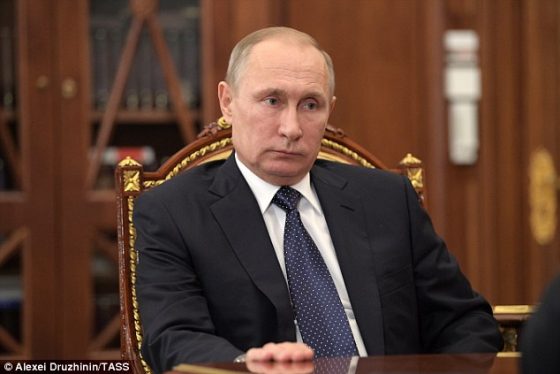 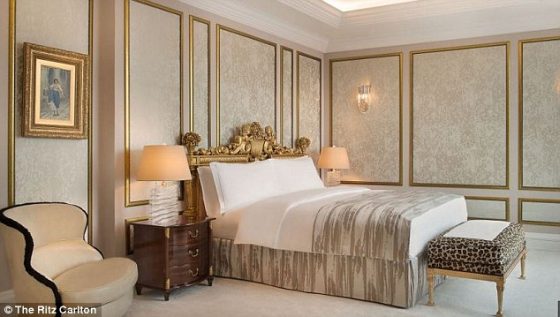 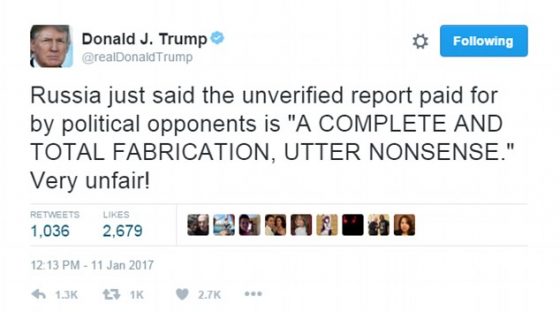 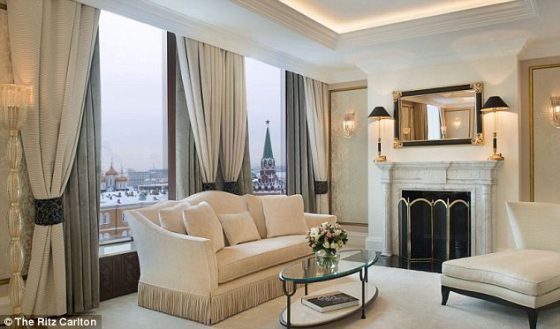 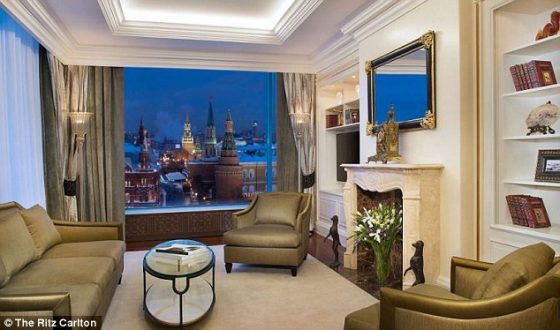 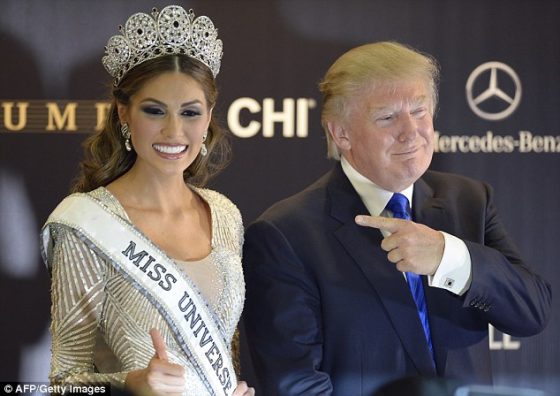 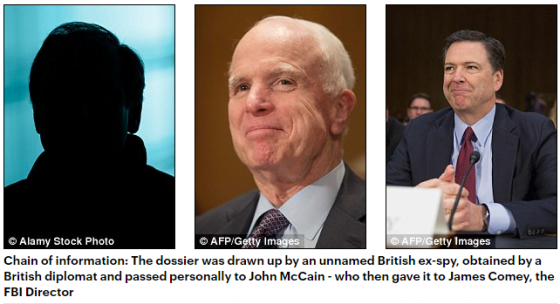 3 thoughts on “Political Witch Hunt: Intelligence Report Surfaces On Trump… Why You Should Doubt It”