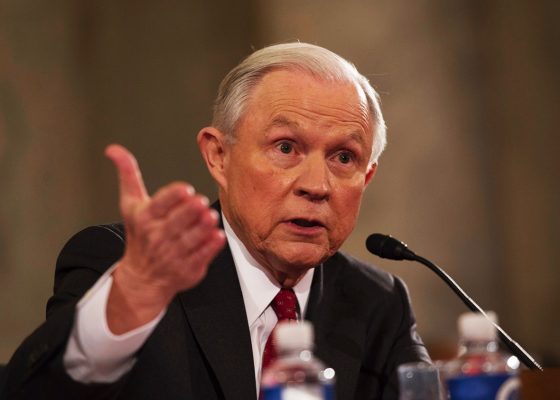 Folks, I gotta tell ya’. My heart leaped with joy hearing Jeff Sessions give his opening statement at his confirmation hearing for Attorney General. http://bit.ly/2jAHctn I thought, “Thank you God! Finally, an America loving adult running our DOJ. What a concept.”

First Obama gave us Eric Holder, a black AG with a chip on his shoulder against whites and America. Out-of-the-box, Holder accused Americans of being racist afraid to honestly discuss racial issues. http://bit.ly/1jpm97L To racist Leftists like Holder, an honest discussion means white America admitting they are eternal racist plotting 24/7 how to keeping people-of-color down.

Holder sued Arizona, calling them racist for seeking to enforce immigration law. http://fxn.ws/2ifnDFa He sued Texas to block their law requiring ID to vote. http://bit.ly/2j1G3dj He refused to prosecute the New Black Panthers because they’re “His people”, black like him. http://bit.ly/2j1yhA4

Talk about cojones, after Holder’s in-your-face arrogant racism, how can Democrats use drummed up claims of racism to oppose the confirmation of Sessions? Answer: The dems know they have the mainstream media securely in their pocket to promote their lies about Sessions.

After Holder, Obama gave us Loretta Lynch as AG. In response to Islamic terrorists murdering innocent Americans on US soil, Lynch immediately threatened to jail anyone speaking badly about Islam. http://bit.ly/1mxTG1G Because the Obama Administration is obsessed with allowing dudes in restrooms with little girls, the DOJ head Lynch filed a lawsuit against North Carolina for righteously saying, “No.” http://read.bi/2j1WmXC Shamefully, Obama politicized the DOJ. Lynch teamed with Obama’s adviser Al Sharpton to brand America’s police racist to justify the DOJ taking control of all police departments. http://bit.ly/1zikCIy Thus far, about 30 police departments have been taken over by the DOJ. http://n.pr/29Ikvz8

Do you see why a common-sense thinker like Jeff Sessions as AG heading the DOJ is such a breath of fresh air?

Sessions vowed to turn back the negative undeserved branding of our brave men and women in blue.

Regarding law enforcement, Sessions said, “They are the ones on the front lines. They are better educated, trained and equipped than ever before. They are the ones who we rely on to keep our neighborhoods, and playgrounds, and schools safe. But in the last several years, law enforcement as a whole has been unfairly maligned and blamed for the actions of a few bad actors and for allegations about police that were not true. They believe the political leadership of this country abandoned them. They felt they had become targets. Morale has suffered. And last year, while under intense public criticism, the number of police officers killed in the line of duty increased ten percent over 2015. This is a wake up call. This must not continue.”

“In recent years, our law enforcement officers also have been called upon to protect our country from the rising threat of terrorism that has reached our shores. If I am confirmed, protecting the American people from the scourge of radical Islamic terrorism will continue to be a top priority of the Department of Justice. We will work diligently to respond to threats, using all lawful means to keep the American people safe from our nation’s enemies.”

Folks, isn’t this a far cry from Obama’s DOJ refusing to name our enemies and threatening to jail anyone who speaks badly about them? Praise the Lord!

Jeff Sessions is a great pick for Attorney General, a man of character who loves God and country; committed to equal justice for all Americans. Sessions will be confirmed; another step on the yellow-brick road toward making America great again.