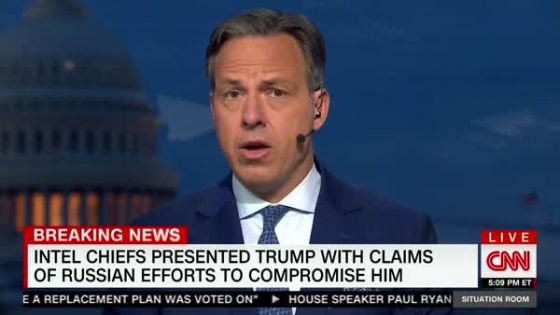 Senator Chuck Schumer (D-NY) said on MSNBC’s Rachel Maddow’s January 3 show, “Let me tell you, you take on the Intelligence Community, they have six ways from Sunday to get back at you. So even for a practical, supposedly hard-nosed businessman, he is being really dumb to do this.” He was referring to President-elect Donald J. Trump’s criticism of the Intelligence Community. Asked what the Intelligence Community could or would do to Trump, Schumer said, “I don’t know.  From what I am told, they are very upset with how he has treated them and talked about them.”

On Tuesday, January 10, we saw the response. It was obvious, based on what this top Senate Democrat had said, that the CIA used CNN to air unsubstantiated charges against Trump. CNN didn’t delineate the bizarre sexual nature of those charges; that was left to a left-wing “news” organization by the name of BuzzFeed, which posted 35 pages of scurrilous lies and defamation.

Demonstrating the sad state of ethical standards at CNN, Wolf Blitzer hyped the story into “breaking news,” when the allegations had been circulating for months, and Jake Tapper was brought on the air, “joining me with a major story we’re following right now.” Blitzer emphasized, “We’re breaking this story.” It was the beginning of CNN regurgitating what President-elect Trump called “fake news.”

What followed was a low point in Tapper’s career, as he willingly participated in a ginned-up controversy using anonymous sources to report on “information” about Trump that started falling apart shortly after CNN aired its “breaking news.”

“That’s right, Wolf, a CNN exclusive,” said Tapper, apparently unaware that he was recycling a document that had been passed around for months. It was CNN, which uses former CIA official Michael Morell as an on-air contributor, that ran with it. Morell has worked for Beacon Global Strategies, a firm founded by former Hillary Clinton aide Philippe Reines, since November 2013.

Trying to distance himself from the controversy, Morell went on CNN to refer to some of the information as “unverified” in the “private document.”

But the damage had already been done, and Morell knew it. CNN had manufactured a controversy over Trump yet again, demonstrating the truth of Schumer’s statement that the intelligence community would get back at Trump.

Ironically, CNN is a “partner” in an effort known as the First Draft Coalition that is dedicated “to improving practices in the ethical sourcing, verification and reporting of stories that emerge online.”

Trying to pump up the “claims,” Jim Sciutto, Chief National Security Correspondent for CNN, said, “To be clear, this has been an enormous team effort by my colleagues here and others at CNN.” A team effort to verify what? It looks like they were handed a 35-page document from the CIA and decided to publicize it. They failed to reveal the details precisely because they could not verify the document.

Sciutto said, “Multiple U.S. officials with direct knowledge of the briefings tell CNN that classified documents on Russian interference in the 2016 U.S. election presented last week to President Obama and to President-elect Trump included allegations that Russian operatives claimed to have compromising personal and financial information about Mr. Trump.”

Tapper brought in “the legendary Carl Bernstein”—a former reporter for The Washington Post who covered the Watergate scandal—who referred to:

So one of the Watergate reporters from The Washington Post had put his stamp of approval on the document by saying it was information that had been “uncovered,” rather than being made up. How did he know one way or the other? The answer is he didn’t.

Later, Tapper said the charges were “uncorroborated as of now,” indicating that they might be confirmed by somebody at some time in the future. There was “no proof” of the claims but “confidence by intelligence officials that the Russians are claiming this.” Again, no names were provided.

CNN was reporting “news,” since a two-page CIA summary of this dirt was attached to a classified CIA report on Russian hacking and election influence that was given to Trump last Friday, January 6. But it was “fake” in the sense that CNN had no way of knowing if the charges had been completely made up.

On this basis, the story could and should have turned against the Intelligence Community, with reporters asking why unverified information had been used against Trump and whether this was retaliation for his criticism. But this course of action by CNN would make it impossible for CNN reporters to go back to these same sources for scurrilous information and false charges in the future. This fact makes it abundantly clear that the news organization was being used by anonymous sources in the Intelligence Community, most likely the CIA.

Since CNN likes anonymous sources, I will use one of my own. “This is a classic CIA blackmail operation where the CIA under Director John Brennan uses someone else’s dirt for the blackmail, and postures themselves as ‘innocent’ in presenting it to Trump,” one observer of the Intelligence Community told me. This is certainly the real story—that an intelligence agency run by Obama’s CIA director would use an American television network to attack the President-elect with scurrilous and unsubstantiated charges.

This is how the Intelligence Community, in Schumer’s words, got back at Trump.

Is America a constitutional republic ruled by the people through their elected representatives? Or do the intelligence agencies rule America and try to blackmail our leaders?

The President-elect said it would be “a tremendous blot” on the record of the Intelligence Community if they did in fact release the document to the media. At another point, he said, “I think it was disgraceful, disgraceful that the intelligence agencies allowed any information that turned out to be so false” get released in that fashion to CNN and BuzzFeed.

CNN is “fake news,” Trump said, and BuzzFeed “is a failing pile of garbage.”

BuzzFeed is being kept alive by the giant media company Comcast, which recently invested $200 million in the “left-wing blog,” as incoming White House press secretary and Trump communications director Sean Spicer called it.

It was Comcast that figured in Trump adviser Peter Navarro’s campaign statement about the need to break up “the new media conglomerate oligopolies.”

Navarro declared that media conglomerates were “destroying an American democracy that depends on a free flow of information and freedom of thought,” adding, “Donald Trump will drain the swamp of corruption and collusion, standing against this trend and standing for the American people.”

One thought on “Who Was Behind CNN’s “Fake News” on Trump?”