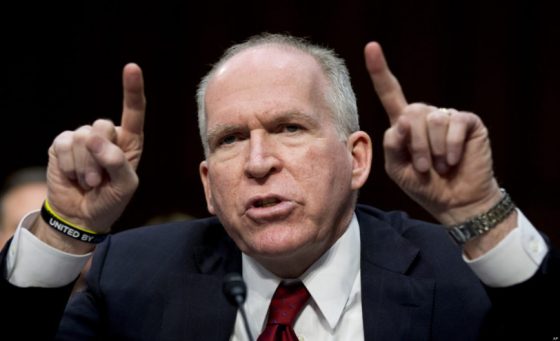 Echoing New York Democratic Senator Chuck Schumer’s warning that the intelligence community is out to “get” President-elect Trump, a Brookings Institution expert who served in the Clinton administration says that Trump’s treatment of his spies will “come back to bite him” in the form of “devastating” leaks to the media that will make him look foolish or incompetent.

Leaking by intelligence officials and analysts is, of course, illegal.

“The intelligence community doesn’t leak as much as the Pentagon or Congress, but when its reputation is at stake, it can do so to devastating effect,” says Daniel Benjamin of the Brookings Center for 21st Century Security and Intelligence. Benjamin previously served as the principal advisor to Secretary of State Hillary Clinton on counterterrorism and was embroiled in the controversy over Mrs. Clinton’s failure to stop the massacre of four Americans in Benghazi, Libya.

Benjamin’s article, “How Trump’s attacks on the intelligence community will come back to haunt him,” did not refute the widely held belief that President Obama’s CIA and its director John Brennan were behind the recent leaks to The Washington Post and New York Times  depicting Trump as a Russian puppet. In fact, the implication is that the CIA and the rest of the intelligence community will seek further revenge on Trump if he continues to criticize them.

But it appears that some intelligence officials believe they are above the law and can use illegal leaks to damage an elected President who has been critical of their work product.

In the most recent case, CNN and BuzzFeed were leaked a document offering unsubstantiated claims of Trump being sexually compromised by Russian officials. CNN summarized the document; BuzzFeed published the whole thing.

Trump denounced these leaks, with Director of the Office of National Intelligence James Clapper disclosing that he had called Trump about them and had declared his “profound dismay at the leaks that have been appearing in the press…” He said that he and Trump “both agreed that they are extremely corrosive and damaging to our national security.”

Trump said Clapper “called me yesterday to denounce the false and fictitious report that was illegally circulated.”

“I do not believe the leaks came from within the IC [Intelligence Community],” Clapper said. However, he did not indicate what investigation, if any, he had conducted to make this determination.

“When something goes wrong—say a military deployment to combat jihadi insurgents in the Middle East blows up in the Trump administration’s face—the press will overflow with stories telling of intelligence reports that were ignored by the White House and briefings the president missed,” Benjamin wrote. Such stories, of course, would be based on illegal leaks.

“Imagine what an aggrieved intel community might do to a genuinely hostile president,” he said. Benjamin’s comments suggest that the intelligence community will use the media to blame Trump for things that go wrong in foreign affairs, in order to protect its own reputation.

Benjamin should know something about the relationship of the Intelligence Community to the news media. His bio says that he began his career as a journalist and held positions as the Germany bureau chief for The Wall Street Journal and Germany correspondent for Time magazine.

The Brookings expert said, “the CIA is usually one of the very first agencies to establish a relationship with new chief executives, because of the briefings it delivers before elections have even occurred and the beguiling prospect it offers of handling missions quietly and efficiently.”

It’s not clear what he means by this. The Obama CIA’s “covert” arms-running program in Syria has backfired in a big way, provoking a Russian military intervention, the loss of up to 500,000 lives, and a refugee crisis which threatens the future of Europe.

Benjamin speculated that Trump will ask the CIA to organize a covert operation to undermine the regime in Iran, a state sponsor of terrorism, and that the agency will offer him options that don’t guarantee success and which he may have to reject. He wrote that “…it is an iron law of bureaucracy that no agency will knock itself out for a leader it deems capricious, especially one who cannot be relied on to defend his own if something goes wrong.”

“The answer from the intel community will never be no,” he said. “Instead, the planners will brief the president on three different approaches. Then they will assess the risk of failure for each at 60-80 percent, providing the Oval Office with a dare it cannot possibly accept. For some, of course, this could turn out to be a silver lining in otherwise dismal story.”

In short, the CIA will look for excuses not to proceed, and then get back to the business of leaking damaging stories to the press when terrorist incidents and other problems occur.

Is the CIA really the “invisible government” that the so-called “conspiracy theorists” have warned about? Is there a “deep state” that tries to run the government behind-the-scenes?

Articles like those of Daniel Benjamin, a journalist who became a Hillary Clinton operative in the counter-terrorism field, seem to be more damaging to the idea of American self-government than anything the Russians have been accused of doing.

One thought on “The CIA’s War on Trump, Continued”