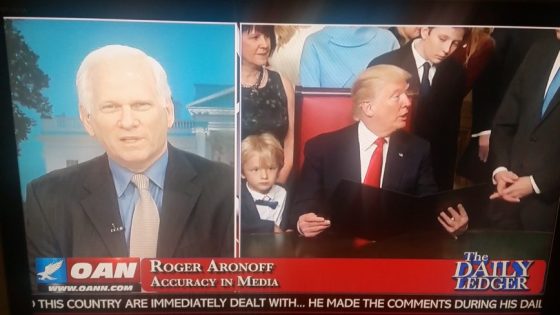 Accuracy in Media Editor Roger Aronoff recently appeared on The Daily Ledger on the One America News Network to discuss how the mainstream media are attempting to delegitimize Donald Trump’s presidency.

The media, along with Democrats, have concocted the story that Russians influenced the election. “So then it became the Russians, the Russians did it,” said Aronoff. “Does anybody believe that if Hillary had won the election, Obama would have expelled 35 Russian diplomats and put these sanctions on? No, of course he wouldn’t have.”

Trump continues to criticize the media for their bias. He recently referred to a Thomas Jefferson quote that “Nothing can now be believed which is seen in a newspaper.” Along with Trump’s tweets, this has caused the establishment media to claim that Trump is attacking the institution of the free press.

“He is not attacking the institution of the free press, which we all cherish,” said Aronoff. “What he’s pointing out is what we at Accuracy in Media have been pointing out since the 1960s, and that is the liberal, left-wing bias in the so-called mainstream media.”

The Washington Post, in particular, has continued its relentless attacks on President Trump. “You can see it virtually every day reading The Washington Post,” said Aronoff. “It’s quite amazing. I’m still looking for the first story that could be labeled pro-Trump. I’m not even looking for pro-Trump, but just something neutral.”

However, Trump is in part to blame for his use of “imprecise language,” said Aronoff. “So, he [Trump] said ‘last night in Sweden,’ when …what happened last night was that he had seen a story on Tucker Carlson’s show on another network, on Fox News. And what he was referring to was the fact that there is a large crime problem, these no-go zones in Sweden and other places now where police don’t want to go. Many policemen are retiring early because they don’t want to deal with what they’re forced to deal with now. And that’s what Trump was talking about.”

Yet the media harped on the issue for days and called the President a liar.

“The whole idea is to delegitimize Trump and his election, and to make it seem like the only way he won is because his buddies, the Russians, gave it to him,” said Aronoff. “Preposterous.”

You can watch the entire interview here: