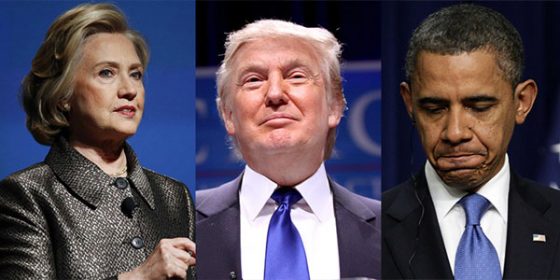 Once again the dominant media narrative has shifted overnight. Last week the media exploded with stories about Attorney General Jeff Sessions’ admitted contacts with the Russian ambassador to the U.S., the latest attempt to somehow derail and delegitimize the Donald Trump presidency. It is part of the narrative concocted by the Democrats and their allies in the media to claim that Trump won the election thanks in part to help from Russia. Collusion has been the word of choice, though no evidence has surfaced to support it.

The narrative changed over the weekend when President Trump sent out a series of tweets asserting that former President Barack Obama had wiretapped him “during the very sacred election process,” and that it was “Nixon/Watergate. Bad (or sick) guy!”

It turns out that the Obama administration, according to reports, did go to the FISA (Foreign Intelligence Surveillance Act) court to gain permission to spy, or electronically eavesdrop, or wiretap some members or elements of Trump’s campaign. They apparently were turned down back in June, and approved in October, after taking Trump’s name out of the request.

Former federal prosecutor and journalist for National Review Andy McCarthy examined how disingenuous the denial coming from an Obama spokesman was. In essence, it comes down to, “It depends on what the definition of ‘surveillance’ is,” and who is a “White House official.”

The media called foul after Trump’s tweets, and the word of the day became “baseless,” as in baseless accusations by Trump. They said he had “no evidence” to support these very serious charges against his predecessor, Barack Obama.

But the allegations of Russian influence were largely orchestrated by the Obama administration, and were ramped up when Trump defeated Hillary Clinton in November. That is when he decided to impose new sanctions and expel Russian diplomats, which never would have happened if Hillary had won.

Now, using his group Organizing for Action (OFA), Obama intends to continue influencing the political scene with a shadow government apparatus. OFA has been coordinating with groups such as the Soros-linked Indivisible. “Obama is intimately involved in OFA operations and even tweets from the group’s account,” writes Paul Sperry for the New York Post. “Run by old Obama aides and campaign workers, federal tax records show ‘nonpartisan’ OFA marshals 32,525 volunteers nationwide.” It has also raised over $40 million, according to Sperry.

The New York Times recently reported that Obama’s intelligence agencies kept documents related to the alleged Russian influence operation “at a relatively low classification level to ensure as wide a readership as possible across the government—and, in some cases, among European allies.’”

In other words, President Obama wanted information potentially damaging to his successor kept at the forefront of the national discussion whenever possible. It could be even better for Obama if there were Congressional investigations; that might distract Trump from rolling back Obamacare or the unsigned Iran deal. The Times also reports that the administration “sent a cache of documents marked ‘secret’ to Senator Benjamin Cardin of Maryland days before the Jan. 20 inauguration.” These documents were shared with Congressional Republicans, as well.

But while Trump appears to have stumbled by not producing evidence to support his claim, in fact his move may result in changing the narrative once again. Now the investigation could include Obama’s and Hillary’s ties to the Russians. After all, the same Russian ambassador who met twice with then-Senator Sessions visited the Obama White House at least 22 times during Obama’s presidency, including four times in 2016. Were any of those meetings about presidential politics? Hillary’s ties to the Russians have been well documented, including the Uranium One deal and Skolkovo, the Silicon Valley of Russia that provided them with dual-use technology and handed millions of dollars to Hillary’s campaign manager, John Podesta.

Senator Tom Cotton (R-AR) argued on Fox News Sunday this past weekend that based on statements from Trump’s Cabinet appointments, they will be much tougher on the Russians than the Obama administration, including Hillary. Cotton said:

“If you want to know what a pro-Russia policy would look like, Chris, here’s some elements of it. You’d slash defense spending. You’d slow down our nuclear modernization. You’d roll back missile defense systems. You would enter a one-sided nuclear arms control agreement. And you’d try to do everything you could to stop oil and gas production. That was Barack Obama’s policy for eight years. That’s not Donald Trump’s policy.”

He might have added that you empower Russia’s ally Iran with more than $100 billion dollars, and a pathway to becoming a nation with nuclear weapons, to go along with its current status as the number one state sponsor of terrorism.

We at Accuracy in Media find the allegations of Russian interference in the election to be flimsy at best.

And as Andy McCarthy points out in another piece, the new Obama/media narrative that his administration was never surveilling the Trump campaign for ties to Russia, cuts against what they have been arguing for months now:

“Now that we’re supposed to believe there was no real investigation of Trump and his campaign, what else can we conclude but that there was no real evidence of collusion between the campaign and Russia…which makes sense, since Russia did not actually hack the election, so the purported objective of the collusion never existed.”

Monday night’s Nightline on ABC picked up on this theme, with reporter David Wright stating that “It’s important to note that there’s an equally outlandish narrative on the other side [besides Trump’s claim about Obama]. The other narrative, also in the mix, is that the Trump campaign may have colluded with the Russian government to meddle in the 2016 election. Again, allegedly. No proof of that either. No smoking gun of collusion.”

Brian Ross then added that former Director of National Intelligence James Clapper said he had seen no evidence of collusion when he left the government in January. With the Republicans controlling every committee in Congress, as well as the executive branch, they should be able to shape the scope of the investigations. We hope they are just and honest, as well as tough and fearless.