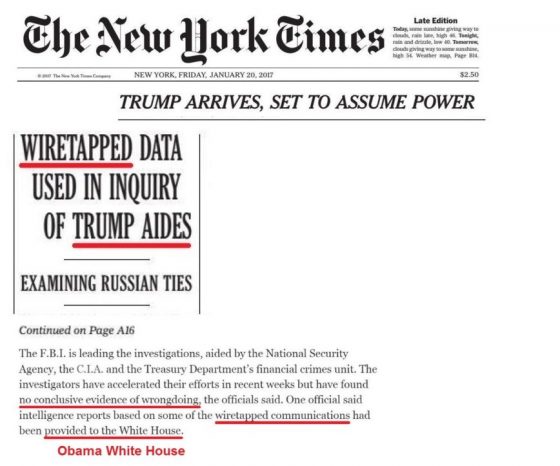 A special report from the Accuracy in Media Center for Investigative Journalism; Cliff Kincaid, Director.
(Editor’s Note: Public hearings on this controversy are scheduled for March 20 and 28 by the House Intelligence Committee.)

Senate Intelligence Committee leaders from both parties, Senators Richard Burr (R-NC) and Mark Warner (D-VA), have issued a disingenuous statement that “no element of the United States government” surveilled “Trump Tower.” They dishonestly evade the fact that media reporting two days earlier had said that British intelligence operating at U.S. behest had likely been implicated in wiretapping Trump and Trump associates, all at the instigation of the U.S. government.

White House Press Secretary Sean Spicer said on March 16 that Fox News sources have reported through retired Judge Andrew Napolitano that then-President Obama had used two officials to arrange with the British NSA, called GCHQ or Government Communications Headquarters, to carry out the wiretapping of both Trump and Trump associates. (See this AIM guest column.) The British now dispute this claim.

This evasive use of British spying is done in order to leave no American “fingerprints” on the highly illegal operation, as the White House quoted Judge Napolitano. It is a long-standing practice under treaty-like intelligence agreements that British intelligence can use NSA facilities, and vice versa, for shell-game eavesdropping.

This is the first time that news sources have explicitly stated that Obama personally ordered the wiretapping of Trump himself, through Obama officials going to the British, though it has been implied in the past by the suspicious lack of any circumspect denials, even when The New York Times said on January 19 and 20 that “wiretapped communications” went to the Obama White House. No one in the article said “Obama White House—but not Obama personally.”

Consider how one important person—President Trump—got the clear media message that he was indeed the target of the spying: President Trump told Fox News’s Tucker Carlson that he read this New York Times story of January 20 before he tweeted about Obama “wiretapping” him. White House spokesman Spicer quoted from this article.

END_OF_DOCUMENT_TOKEN_TO_BE_REPLACED 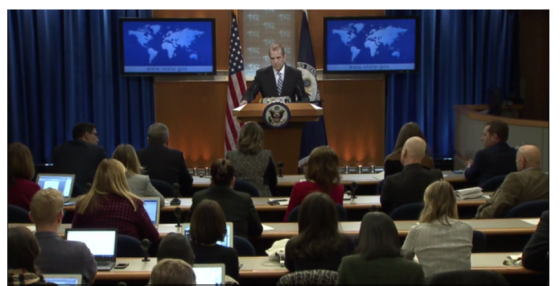 It’s no secret that the Trump administration has established a “new paradigm” in dealing with the press. It’s something we have advocated from the start of the new administration. One major aspect of the new approach is accepting the conservative media as legitimate members of the press. After this produced changes in how the press covers the State Department, the gnashing of teeth really began.

Liberal reporters weren’t interested in the anniversary of the conflict in Syria that has taken 500,000 lives. They wanted to know why a reporter from a conservative outlet was allowed on a State Department plane to Asia. They saw it as a challenge to their power and authority, and peppered the State Department spokesman with hostile questions.

“Can we move beyond this?” pleaded Mark C. Toner, the acting spokesperson, as reporters displayed their selfish attitudes on press access.

The liberal media were in meltdown mode over the decision to bring Erin McPike of the Independent Journal Review (IJR) on the official plane carrying Secretary of State Rex Tillerson to Asia.

A Reuters story, “Conservative website only media on Tillerson plane to Asia,” captured the sorrow. In the briefing room, the sorrow erupted into grief and barely-controlled anger.

“This is a conservative outlet,” protested Michelle Kosinski, a Senior Diplomatic Correspondent for CNN, referring to IJR. She added, “For the White House, or whoever made this decision, to choose an organization that is not part of the pool and is an obviously conservative website or whatever you want to call it, doesn’t that narrow the message and not broaden it? And what message does this send to the American public and the rest of the world?”

The message it sends is that the old liberal media, also known as the “obviously liberal” media, are not as important as they once were. It means that the new Trump administration wants to accommodate the new media.

Please take a moment to watch or read a transcript of the State Department’s March 15 briefing. It is something to behold. Some reporters seemed on the verge of an emotional breakdown. Actually watching the briefing gives you an insight into the reporters berating the spokesman for the department. They are not identified by name in the transcript.

The State Department acknowledges trying to reach a new audience by including a conservative reporter. Toner called it looking outside the box. He explained, “I think it sends a message that we’re willing to look at new paradigms with our approach to the media, again, while at the same time ensuring that traditional media has full access, and non-traditional media for that matter.”

It is a realization that the liberal media monopoly is still in the process of disintegration.

The new way of doing business was not acceptable to CNN’s global affairs correspondent Elise Labott, who countered, “So does that mean that in your effort to include a broader participation of U.S. media, that the foreign policy journalists and diplomatic press corps that have traveled with the secretary for ages and are steeped in the issues of foreign policy and that are at this podium questioning about U.S. policy and the various developments every day are being kind of excluded?”

You get the point: only the established liberal media “steeped in the issues of foreign policy” have the credentials to cover the State Department and get special seats on a State Department plane.

Keep in mind that reporters can still take other flights to the destination to cover the secretary of state.

Labott’s foreign policy expertise was exposed in emails released during the presidential campaign showing that she worked with an aide to Hillary Clinton to discredit Sen. Rand Paul (R-KY) for his tough questioning of the then-secretary of state during a Benghazi hearing in 2013. AIM’s Don Irvine called Labott “nothing more than a shill for the Democrats, masquerading as a reporter.”

It appears that somebody in the White House and/or the State Department understands this as well.

Yet, the arrogant Labott insisted that the IJR reporter “does not know anything about these foreign policy issues.”

Later, at the briefing, another reporter protested the new “pick-and-choose system whereby you select individual reporters or news organizations, rather than going with what had previously been the practice, which is to include a wide array of news organizations, and at a minimum, a wire service reporter who would share the information with all the other regulars and whose news organizations have very wide dissemination of their reports?”

Of course, the fact is that conservative media are able to disseminate information as well, and their audiences count for something, too.

A new day is dawning.