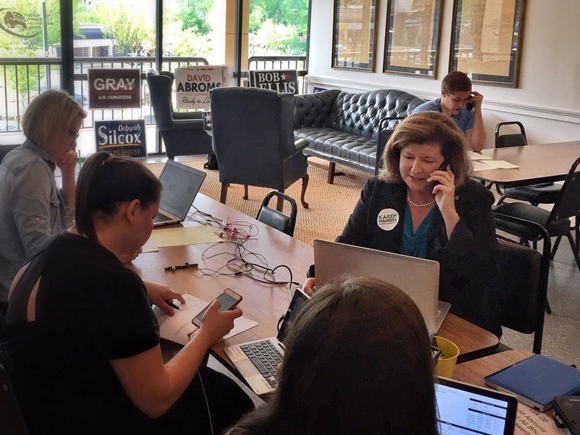 (Georgia, Congressional District 6)  The Marxstream media and other Democratic Party operatives are nervously playing up this special congressional election, the open primary of which closed this April 18. Why? Because it’s there, the election that’s going on. And they’re going to lose in June 20’s 1:1 runoff match. That is, unless some great set of blunders occur.

The fact that Donald Trump won this district by only about one-percent is not a liability; it is of benefit. First, Trump’s result lowered expectations. Second, this district is, relatively speaking, conservative-sensible. This is basically Newt Gingrich’s old constituency. Many here will be interested in electing a Republican, not necessarily to endorse Trump, but to try to temper him and keep him in check!  For instance, classic Georgia-6 voters, like so many conservatives, are happy that a new and improved Obamacare replacement is being negotiated, instead of Trump-Ryan-and-ironically-Price-care. (The reason for the special election is that their Rep. Tom Price, a licensed physician, is now Director of Health and Human Services.)

Democrat Jon Ossoff has just delivered a cardboard cut-out, white boy impression of Barack Obama in his primary night speech. Work on the inflections and hesitations, Jon. He’s being billed as a young outsider by the deceits of the Dems. Actually, he’s a calculating, seasoned, political animal and nothing very special to present for the attempt to depose a hard-R seat in the House.

But, what about Karen Handel? Is she the real thing, or a RINO? She’s as conventionally solid as nearly any  Republican can be and with a nice Southern “populist” twist. Just the kind of Republican to complement The Donald. Here’s some quick and dirty evidence for the clicking.

Let the Democrats continue to play this election up. Play it up, right back! We’re living and breathing heartily in the time of The Popcorn Presidency, so grab a bowl, sit back and tweet up some Georgia-6 fun, along with @realDonaldTrump, the #MAGA legions, the Tea Party, pro-lifers, a few Kekistanis, whatever they are, on and on. As the man says, this is about… WINNING… for our personal and national sovereignty, and our natural rights (whether Manhattan Man knows what that’s about or not)!