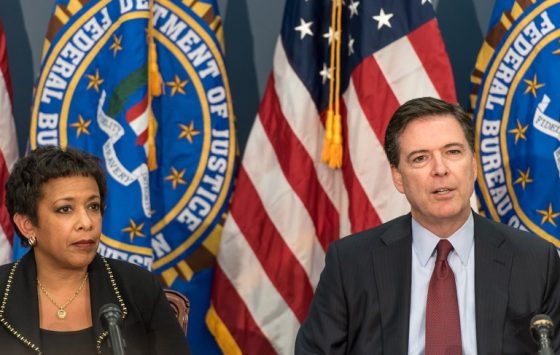 The New York Times recently published a lengthy postmortem on the effects that the FBI investigation into Hillary Clinton’s emails and the bureau’s investigation into Donald Trump’s alleged ties to Russia had on the 2016 election. The paper casts blame because FBI Director James Comey went public with the Clinton investigation, but didn’t expose the Trump inquiry during the election.

“For all the attention on Mrs. Clinton’s emails, history is likely to see Russian influence as the more significant story of the 2016 election,” concludes the Times. “Questions about Russian meddling and possible collusion have marred Mr. Trump’s first 100 days in the White House…Despite Mr. Trump’s assertions that ‘Russia is fake news,’ the White House has been unable to escape its shadow.”

The media, and many Democrats, continue to speak of collusion between Trump associates and Russia that may have influenced the outcome of last year’s presidential election. Yet we have reported at length about how thin the evidence is for this theory.

New polling, however, shows that Trump would win the election even now, despite a low approval rating. The Washington Post, describing its ABC/Post poll, reports, “Asked how they would vote if the election were held today, 43 [percent] say they would support Trump and 40 percent say Clinton.” Of course, the Post buried this deep into an article which discusses Trump’s disapproval rating, titled, “Nearing 100 days, Trump’s approval at record lows but his base is holding.”

ABC’s Jonathan Karl was more honest, tweeting out, “According to the ABC/WP poll, among 2016 voters, @realDonaldTrump would beat Hillary Clinton in a rematch—in the popular vote, no less.” This is really quite remarkable, given the round-the-clock, unremitting hostility toward Trump, not just in nearly every news story and from journalists on nearly every network, but also from The Washington Post and New York Times. Every late-night talk and comedy show is beyond brutal to Trump and his family, as are many of the scripted primetime shows.

The only TV network where Trump is not the object of such hostility is Fox News, where several journalists support Trump, others are neutral, and some are hostile, like Shepard Smith. Talk radio and some of the conservative newspapers, e.g. The Washington Times and Washington Examiner, are at least balanced in their coverage of Trump, and in some cases very supportive.

That the Russians somehow skewed the election outcome is nonsense. Despite endless reporting about baseless allegations of collusion, voters would, if the polls can be believed, vote for, and elect, Trump again. The real interference was run by White House lackeys like Attorney General Loretta Lynch and the mainstream media.

“It was a by-the-book decision,” reports the Times. “But Mr. Comey and other F.B.I. officials regarded it as disingenuous in an investigation that was so widely known.”

Some have also argued that Lynch openly played favorites when Bill Clinton boarded her plane at the Phoenix airport in what the Times matter-of-factly calls a “chance encounter.” It was just days before Comey’s scheduled interview with Mrs. Clinton over the Fourth of July weekend, and added to the appearance that the fix was in. Bill Clinton had appointed Lynch to her position as U.S. Attorney when he was president, and it was reported that a message from the Clinton camp was sent to Ms. Lynch via The New York Times that she would be getting strong consideration to stay on as attorney general in a Hillary Clinton administration.

As for when Comey signaled to Congress that the investigation into Clinton’s emails had been reopened, less than two weeks before the election, the Times reports that “In a series of phone calls, her [Lynch’s] aides told Mr. Comey’s deputies that there was no need to tell Congress anything until agents knew what the emails contained.”

The Times also contends that Russian hackers stole a document which cast doubt on Lynch’s impartiality. “The Times’ investigative report suggests that a U.S. intelligence agency managed to intercept some of what Russian hackers were stealing,” reports Breitbart, continuing “and that one document, ‘described as both a memo and an email, was written by a Democratic operative who expressed confidence that Ms. Lynch would keep the Clinton investigation from going too far.’”

But it was Obama administration officials, specifically the White House, who told Comey not to publish an op-ed about Russian interference in the election because they were waiting for the intelligence agencies to produce a “formal intelligence assessment,” the Times reports.

For all the accusations that Comey was too aggressive in his investigation of Mrs. Clinton’s reckless handling of classified material, often referred to as her “email scandal,” he made the case for her prosecution, and then recommended against it, saying that “no reasonable prosecutor” would pursue this case. And the Department of Justice granted immunity to key persons in the case such as Cheryl Mills and Heather Samuelson, who received that deal in exchange for access to their private laptops.

Mrs. Clinton blamed her electoral loss on Comey’s interference: “Just as we were back up on the upward trajectory, the second letter from Comey essentially doing what we knew it would—saying there was no there there—was a real motivator for Trump’s voters,” she said last November.

But the new Post/ABC News poll demonstrates that Trump, despite low favorability ratings, would be elected again today—by a greater margin. “When asked if they would vote for him again, 96 percent say they would, which is higher than the 85 percent of Hillary Clinton voters who say they would support her again,” reports the Post.

The media have done everything they can to damage the Trump presidency, and they did everything they could to ensure—and predict—a Clinton win. Yet the voters conclude that they would vote for Trump. There is no way to spin this. The media, and Democrats, lost in November for any number of reasons, including their own incompetence and misunderstanding of the American people—not Comey’s actions or a Russian influence operation.

In the early 1980s, during an “Introduction to Political Science Class,” I was introduced to the concept that there are generational geopolitical/sociological changes every 35-40 years. I vividly recall discussing LBJ’s “Great Society” programs, the social angst of the Vietnam War, the nascent rise of globalism and the beginning of the close collusion between big government and big business and how such commenced a new era of activist and redistributionist government.

The professor stated these trends stay in place until there is some finale equivalent to the conclusion of a Fourth of July fireworks display where the current trend goes on steroids believing the status quo is all knowing and powerful. Radical change then occurs.

I believe I live in the congressional district that commenced the battle against the Establishment. David Brat defeated House Majority Leader Eric Cantor in a primary, a primary that Cantor all but dismissed as meaningless and unthreatening.

This was first time that a major leader was defeated in a primary since the late 1800s. Brat won because Cantor’s constituents — one of which is me — believed that Cantor lost contact with the electorate. That Cantor was all about himself and the perpetuation of the Establishment.

The professor dogmatically stated these changes will occur, not questioning as to if, but rather as to when.

For the first time in many generations, a candidate from a major political party is not in contention for France’s presidency. This would be equivalent to neither a Republican or a Democratic candidate being a candidate for the US Presidency.

On May 7th, France’s citizenry is faced with a dichotomy. The choice is a far right populist, who espouses economic nationalism and “Frexit,” or a moderate who supports closer ties to the EU. Neither candidate is from a national party and the moderate is a political neophyte who most thought had little chance of succeeding to the “finals” as little as 60 days ago.

In other words, a strong argument can be made the survival of “The Federation” is at hand. There is a clear battle between a commitment to dramatically changing the current economic system or one to maintain the existing structure.

To write the obvious, the entire Establishment is supporting the moderate and at this juncture is projected to win by a considerable margin.

Will Le Penn do the unthinkable and win?

Why the attention on this election? Today’s financial system is predicated upon globalism. The top performing equity issues are mega capitalized global growth issues, a term that I find oxymoronic. According to Bespoke Investment Corporation, the concentration of wealth into a handful of mega sized global growth companies is unprecedented. What happens if globalism dies an inglorious death in 2 weeks?

Perhaps the only certainty to write is that regardless who is France’s next president, today is radically different than yesterday. The electorate is speaking very loudly and it is very anti-Establishment.

Equities advanced on the French election with many declaring that Le Penn will lose by a wide margin. I think I wrote these same words in late June 2016 referencing Brexit.

The Dow should open nominally higher, perhaps the result of tax reform optimism. The 10-year is off 8/32 to yield 2.31%.