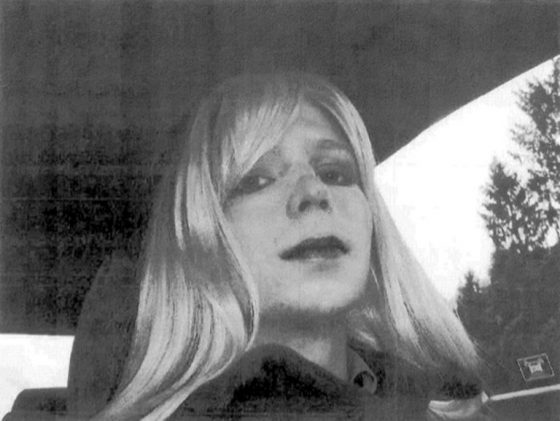 The most glaring omission in Tucker Carlson’s interview of the human oddity known as Bruce/Caitlyn Jenner was the failure to seek comment on the transgender traitor by the name of Bradley/Chelsea Manning. This is the former U.S. Army analyst scheduled for release from prison next month because former President Barack Obama commuted his/her sentence for Russian-style espionage.

Jenner, a former male Olympic champion, is now a spokesman for the “trans community” that includes espionage agent Bradley/Chelsea Manning. So what about Manning? What did Manning’s gender confusion and mental problems have to do with his/her espionage against the United States?

Will Manning get a “courage” award in the same way that Jenner was honored by ESPN for a biological transformation through chemicals and surgery from masculine to feminine?

We understand that the Jenner appearance on Fox News was a cheap publicity stunt, designed by Jenner to sell her new book, and for the cable channel to herald Tucker Carlson’s new show, a replacement for the “O’Reilly Factor” and its fired host, Bill O’Reilly. Still, there was an opportunity for Tucker to ask about one of the major espionage cases of our time. He blew it.

In his recent remarks at the Center for Strategic and International Studies, CIA Director Mike Pompeo described Manning essentially as an agent of Russia through his association with WikiLeaks, which functions on behalf of Russian and other anti-American interests. Pompeo said, “WikiLeaks walks like a hostile intelligence service and talks like a hostile intelligence service. It has encouraged its followers to find jobs at CIA in order to obtain intelligence. It directed Chelsea Manning in her theft of specific secret information. And it overwhelmingly focuses on the United States, while seeking support from anti-democratic countries and organizations.”

Pompeo raises more questions than he answers. How many more insider spies like Manning are there? Are the WikiLeaks followers at the CIA among the agency’s transgender work force? What, if anything, will Pompeo do to purge the questionable hires at the CIA that were made under the reign of Obama CIA director John Brennan, an advocate of “diversity” who laid out a multi-year plan to hire gays and transgenders?

Pompeo’s comments about Manning and the insider spy threat were unusual because he had been asked during his confirmation hearings by Senator Kamala Harris (D-CA) about the agency’s gay and transgender employees. “You have my assurance that every employee will be treated in a way that is appropriate and equal,” Pompeo responded.

Of course, the word “appropriate” leaves the door open for dealing with traitors in the CIA in a special manner.

WikiLeaks declared “Victory” after Manning’s sentence was commuted, while former CIA/NSA analyst Edward Snowden said, “Thanks, Obama.” Snowden is a traitor who fled to Russia after disclosing classified information.

So does this mean that Obama is an agent of Russia? In this case, he is clearly serving Russian interests.

At the time of Manning’s commutation, CNN reported that WikiLeaks “is at the center of the storm over alleged Russian hacking of Democratic servers during the election, and Assange is being accused of directly subverting American democracy.”

Here was a case of Obama openly assisting a de facto Russia agent and his pro-Russian handlers. Of course, that’s not the way CNN put it. Instead, Obama had come “under intense pressure from LGBT groups that have been stalwart supporters throughout his political career to show eleventh hour compassion towards Manning,” CNN reported.

So the fact that Obama pleased the LGBT community with his “compassionate” decision makes everything all right and eliminates the need for informed speculation about Obama serving Russian interests.

Carlson should have asked Jenner about Manning’s role as a transgender hero.

Jenner, a rich reality TV star who lives in Malibu, can pay for her fancy clothes, which were on display in the Diane Sawyer special on ABC. She can pay for chemicals and surgeries to complete the “transition” to female.

It’s been different for Manning. Taxpayers have picked up the bill.

During his/her time in prison, according to The New York Times, Manning wears female prison undergarments, including a sports bra, and “subdued cosmetics.” In early 2015, the paper reported, he/she was allowed “to get speech therapy to feminize the tone and pitch of her voice and began cross-sex hormone therapy.”

These perks came about because Manning’s legal team at the ACLU sued for the benefits.

The situation is so extreme that West Point hosted a Transgender Day of Remembrance, organized by the Army’s Office of Diversity, Inclusion and Equal Opportunity. Judicial Watch disclosed that Deputy Assistant Secretary of Defense Amanda Simpson, a former test pilot named Mitchell, spoke at the event, at a cost of $1,099.92.

The Fox News publicity stunt with Caitlyn Jenner could have produced some real news, if only Carlson had asked about the Manning case and others like it. Instead, he permitted Jenner to say that she wished President Donald Trump would go further in his support for LGBT rights.

Carlson called Jenner “the world’s most famous transgender person.” This designation may not last for long.

When Manning gets out of prison in May, can we expect an appearance on “Tucker Carlson Tonight?” If Carlson is struggling to get O’Reilly-type ratings, you can bet on it.