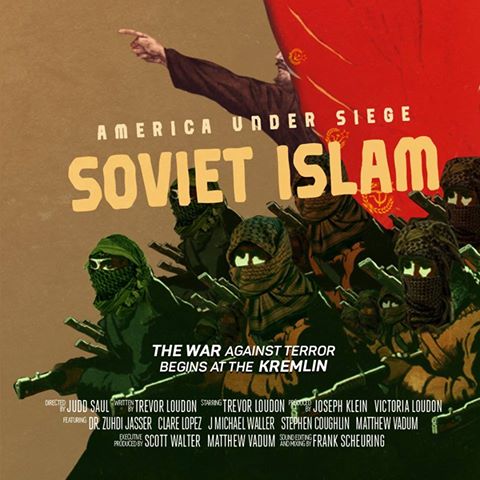 The next episode in Capital Research Center’s five-part “America Under Siege” webseries, “Soviet Islam,” has just been released on this YouTube channel and at DangerousDocumentaries.com.

With President Trump executing missile strikes in Syria and radical Islamic terrorism being as big a threat as it ever has been, we need to understand how these oppressive regimes and extremist ideologies got started and are empowered. Working with Dangerous Documentaries, director Judd Saul and conservative commentator Trevor Loudon have compiled a team of researchers who have uncovered the history of the Soviet Union’s meddling in Middle Eastern politics, creating a new enemy for the United States, and have learned that Russia’s continuing alliance with Islamists is forwarding a radical domestic threat in America today.

“Soviet Islam” is the second episode in the five-part “America Under Siege” documentary web-series releasing over the course of 2017. Each episode profiles the influence of radical Marxists on various segments of American society.

After World War II, the Soviet Union used Muslim intelligence assets to subvert neighboring Muslim-majority nations. Putin’s Russia continues to infiltrate Islamic communities around the world, including Chechnya, Iran, Syria, and Palestine, and also at home in the United States, where Islamists and communists have joined in an unlikely alliance.

Markets fluctuated on a flurry of policy news ranging anywhere from Nafta to trade reform, to the budget to healthcare and to taxes. Oil tumbled on concerns over a supply glut as Libya reopened its biggest field while earnings largely matched expectations.

Today, initial estimates of first quarter GDP is released. Analysts are expecting a 1.0% growth rate and a 2.0% rise in the core PCE or the Federal Reserve’s preferred inflationary indicator.

As noted many times the confidence has soared because of Trump’s pro-growth proposals, proposals that have yet to be legislated.

In my view, Washington is playing roulette with our economic future. If our elected members are for the people, of the people, charged with increasing economic well-being for the general economy, why the delay in passing key regulatory and tax reform?

I can write volumes answering the above question.

There have been recent remarks about shrinking volatility. While this may be correct in the aggregate, in my view, reality is considerably different. There is intense volatility beneath the surface where cycles that used to take 18 months now take 18 days. For example, the short interest in the Russell 2000. About two weeks ago, short interest rose by the greatest amount since 2008. Bloomberg wrote yesterday that late last week actual short interest in the Russell 2000 swelled to the most since September 2014.

Two weeks ago, the Russell 2000 was at its annual lows, reversing the gains from the election, trading at its 50 day moving average lines. Earlier this week, it rose to a record. Wow!

This is volatility, volatility the result of technology based trading.

And then there is oil. Crude has been locked in a range of $48-$55 for the past year. It has also traded in this range during the past six weeks. Oil securities however are grossly underperforming and are priced for $40 crude.

There is a historical disconnect between the price of oil and the value of oil securities. Something has to give. Either oil the commodity will drop or oil securities will rally to restore market balance. I think the latter.

In my view, the vast majority of historians will view 2017 as a tectonic transition year, where generational trends end and another commences. This is not a radical thought. Globalism is on its heels with the Establishment vehemently fighting to maintain power and its perceived global dominance.

The Dow should open flat even as two mega-capitalized technology leviathans exceeded profit expectations. Geopolitical tensions are perhaps weighing upon sentiment. However, the direction of the opening can change radically given the potential significance of the 8:30 data. The 10-year is flat at a 2.31% yield. 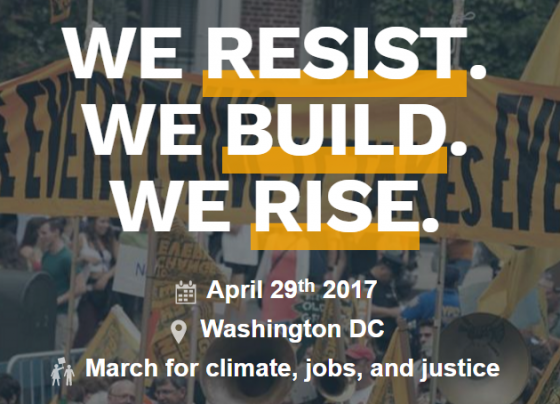 “System Change, Not Climate Change” is the demand being made by the Party for Socialism and Liberation in regard to Saturday’s Peoples Climate March. “Only socialism can solve the climate crisis,” they say. It appears that the organizers of the march agree, since the old Moscow-funded Communist Party is listed as one of the official “partners” of the group sponsoring the April 29th demonstration in the nation’s capital.

Russian leader Vladimir Putin would like nothing more than to see the U.S. close down its oil and gas industry and try to run a modern industrial economy on solar panels and windmills.

The Communist Party (CPUSA) is ecstatic, saying that a “radicalization process” is underway “that’s given renewed meaning and life by the independent movement to elect our country’s first African American president, Occupy Wall Street, the Dreamers, Black Lives Matter, marriage equality, and the political revolution energized by the Sanders bid for the presidency.”

But don’t expect our media to look behind the curtain of the Peoples Climate March, since reporters share the ideology of climate change. We will probably be told that the march is comprised of moms and kids.

In this case, it’s not really “behind the curtain” because the “partners” of the march are listed openly on the organizer’s website. The CPUSA-affiliate U.S. Peace Council is another partner.

Other official partners include Catholic groups like the Franciscan Action Network, and unions like the American Federation of Teachers, American Postal Workers Union, Service Employees International Union, and Communications Workers of America.

The Democratic Socialists of America (DSA), a group that backed Obama from the start of his political career, is a partner, as is the Socialist Party and the American Humanist Association.

Academia is represented through such organizations as the American Association of University Professors.

But there’s more: the Global Muslim Climate Network, the Islamic Society of North America, and a group called Green Muslims have signed on as partners.

Native Lives Matter has been formed, and they, too, are a partner of the climate march.

“On the 100th day of Trump’s presidency,” say the organizers, “our march will celebrate both the diversity of our movements and demonstrate our unity in the face of Trump’s attempts to divide us.” This is apparently a reference to President Donald Trump’s decision to enlist some industrial unions in a coalition to create jobs through the use of America’s oil and gas resources.

Trump’s electoral success has split apart the Democratic Party coalition that depended on unions and workers to help liberals win on Election Day.

One of the speakers, Jazzlyn Lindsey of Black Lives Matter DC, is described as someone who “utilizes her innovative interpersonal skills to educate and engage her peers on issues pertaining to the history of punishment and prisons, environmental racism, and intersectional feminism.” A picture on her Facebook page shows a “Black Muslims Matter” sign.

The national coordinator of the group behind the march, the Peoples Climate Movement, is Paul Getsos, who says, “We are a broad-based formation of over 50 organizations working with movements across the country to stop the Trump Administration’s and Congress’ attacks on our planet, people and communities. We demand an economy and government that works for all, clean air and water and a healthy environment. This administration must immediately stop attacks on communities of color and immigrant, Muslim, indigenous and LGBTQIA communities. We are marching from the Capital [sic] to the White House on his 100th day in office to show our resistance to the policies that favor the 1%, hastens climate change, poisons our water and air and harms our communities and people and then returning home to do the work of continuing to build this movement in every community across the country.”

The first Peoples Climate March was held on September 21, 2014 in New York City.

Getsos, described as a political strategist with his own consulting firm, was a contributor to the “Ear to the Ground Project” associated with the Freedom Road Socialist Organization. Another contributor was “former” communist and CNN analyst Van Jones.

One of their recommendations is to reach out beyond the far-left: “We need to identify a set of people who are our best communicators, and their role should be to hold down movement ideas, in a smart way, in public debates, online, on CNN, etc. Not just in ‘alternative’ or progressive media.” Another recommendation is, “Need more funny people turning our political ideas into widely distributed to large numbers of people. Political humor, satire, that can go viral and make a mass impact.”

Stephen Colbert is apparently not far-left enough for these characters.

Under the heading of “political formations,” leftists are told, “We need a new Left party. A united party for socialism. Not primarily an electoral vehicle. Should be explicitly anti-capitalist, a bridge between generations, training activists. An eye on the fight for people’s power. Without a hard left you have a weak middle. I don’t mean dogmatic, but it’s clear that capitalism does not have the answer to the world’s problems and we need a socialist alternative.”

However, billionaire Tom Steyer, president of NextGen Climate, is a big backer of the rally. “Tom founded a successful California business, which he left to work full-time on non-profit and advocacy efforts,” his bio says. In fact, he ran a financial hedge fund, Farallon Capital Management, which is considered to be on the cutting edge of the highest stage of capitalism, to use Marxist jargon. He sold his stake in the firm in 2012 and is now worth $1.6 billion. Forbes points out that he spent more than $65 million to back environmental causes and the Democratic Party in 2016. “Trump’s victory shocked him,” the magazine says, “Now Steyer, the founder of Farallon Capital and the environmental group NextGen Climate, is using his voice—and his wallet—to battle[the]  Trump administration.”

Like the hedge fund associated with George Soros, another billionaire backer of the “people’s revolution,” Farallon has specialized in managing equity capital “for high net worth individuals.”

It all sounds pretty capitalist to me.