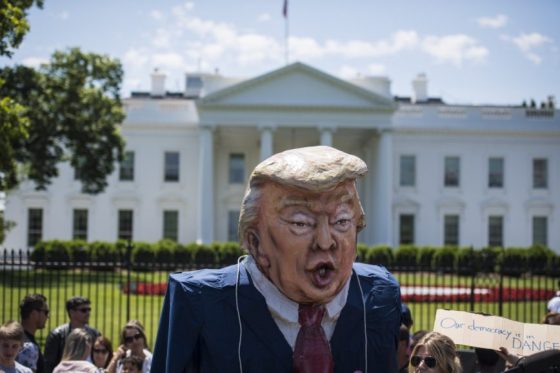 Not content with publishing a daily barrage of anti-Trump articles, The Washington Post is now encouraging demonstrations against the President. On Wednesday afternoon, the Post published a special story, “Amid questions about Russia-Trump ties, protesters rally in front of the White House,” about a few dozen people with anti-Trump signs.

The real purpose of the article was to promote what are supposed to be much larger “March for Truth” demonstrations in Washington and New York on June 3. The objective, the paper claimed, is to call “for more transparency in possible Trump and Russia connections.”

Speaking of transparency, who’s behind the protests? The Post told us they were “liberal organizations.” One organizer told the Post, “This may come off as partisan, but it’s not, it’s open to everyone.”

The official press release for the June 3 event names the “National Partner organizations” as including Progressive Democrats of America (PDA). One of the PDA’s national advisory board members is progressive personality Thom Hartmann, who has a TV program on the Moscow-funded channel Russia Today (RT) called “The Big Picture.”

For some strange reason, Hartmann’s bio on the PDA website does not mention HIS Russian connection. Somehow, progressive links to the Russians do not fit into “The Big Picture” the Post and other media are trying to paint.

PDA says about him: “He’s hosted and promoted PDA on his progressive national and internationally syndicated talk show—available in over a half-billion homes worldwide.” This is the same show carried by RT.

Here are some actual headlines from Hartmann’s programs:

You may recall that I have video of when I asked Hartmann about taking rubles from Russia. Embarrassed by the question, he tried to grab my camera and silence me.

This Achilles heel of the progressives’ anti-Russia campaign demonstrates how phony their calls for “transparency” in regard to Trump really are.

The left-wing Nation magazine admits that RT America, the Kremlin’s spinoff for American audiences, has been anti-Trump. “Many of the channel’s biggest names were either ardently anti-Trump or highly skeptical of what a Trump presidency might mean for America,” the publication noted. It names Hartmann and former MSNBC host Ed Schultz.

But since RT has been accurately designated as a Kremlin mouthpiece by the U.S. intelligence community, this means that the liberal narrative that Moscow was pro-Trump is demonstrably false. The Nation says, “A simple look through RT America’s YouTube channel throws up numerous clips in which guests refer to Trump as misogynistic, bigoted, and racist.”

So if RT has been anti-Trump, as The Nation admits, then Moscow was lending its propaganda support to the side of the political spectrum that has historically been aligned with the Kremlin—the fellow travelers on the left, such as The Nation itself.

“If RT can be accused of trying to influence the American public, it certainly was not by feeding them a steady diet of pro-Trump information,” the magazine admits.

The PDA is apparently not concerned about one of its board members getting paid by the Vladimir Putin regime. Yet it sponsors demonstrations seeking “transparency” in what President Trump is supposed to be doing for Moscow. This double-talking is what passes for “liberal” activism at The Washington Post.

The “March for Truth” website quotes Senator Richard Blumenthal (D-CT) as saying, “people want the truth uncovered about how the Russians sought to interfere and undermine our democracy and electoral system. And they also want accountability.”

How about some of this same medicine for the “progressives” taking Moscow’s money?

The author of the Post article, Perry Stein, is described as someone “covering D.C. and a lot of protests these days.” Next time, Ms. Stein, please take some time to dig into the nature of these “liberal” protests. A little digging would have disclosed that the PDA, a main sponsor of the anti-Trump “March for Truth” demonstrations, has a board member getting paid by the Kremlin.

The Post keeps telling us that Russia supported Trump. If that’s the case, why is Moscow underwriting Thom Hartmann’s program?

“Democracy Dies in Darkness” is the new slogan of the Post. Journalism dies in darkness, too. It’s already dead at the Post.

For those of you familiar with RADAR (Radio Detection And Ranging) and SONAR (Sound Navigation And Ranging), there are similarities between these technologies in two ways: 1) they both emit a wave form and detect the reflection of that wave form, using time variations to judge distance, and 2) they both have a secondary “shadow” capability, that is they can also detect the presence or absence of objects by what doesn’t get reflected or which reflections are masked because something blocks that reflection.

Yes, I know, the guys whose grasp of these technologies is more current than mine will be better able to explain the mechanics, but what I’m highlighting here is that the absence of a signal can be as meaningful as the presence of a signal.

If you send out a wave, expecting it to reflect off an object, and your return wave pattern has a “hole” (or shadow) in it, this “shadow” may indicate that either something blocked your outbound signal or something blocked or attenuated the reflected signal. Alternatively, something may have deflected your signal away from you, causing an absence of reflection where it’s expected.

Sometimes, when you’re scanning for activity, the value of “nothing” can be that you know where you can fly or sail or where a barrier isn’t

And sometimes, the “nothing” tells you something more ominous.

This is where I bend the analogy a little, into the field of electronic publishing.

Let’s say you run a blog. Let’s say that an indication of how well you’re reaching your chosen public (or at least some public) is the number of replies or likes or shares you see daily or weekly. Or perhaps your favored metric is how much money advertisers send to you based on their measurement of the traffic which includes viewings of their ad content. That’s not entirely unlike a RADAR reflection return or a SONAR ping. You send out content, and the comment/like/share/etc. activity (or advertising checks) is the return signal that tells you that you are reaching people.

What happens when your return signal suddenly falls off?

You immediately start troubleshooting. What’s causing this “shadow” in your signal?

You look around at all the places your signal is supposed to hit and do a quick thumbnail analysis. Hmm, my blog traffic from regular readers hasn’t really changed. The referrals from my third-party exchange posts are holding steady. Oh, wait, what’s this? A large, major social media site is showing much lower traffic than usual. MUCH lower traffic. That’s odd. The number of posts is about normal, and the content isn’t that different from normal, but the return signal just isn’t happening.

You remark on it to a friend. They’re seeing much the same thing. You talk to others who do basically the same thing you do. Everyone of them says “I thought it was just me!” You do a little more analysis. You discover that there are undeniable similarities and detectable patterns in the “shadows” on your publishing RADAR. The holes in your return traffic line up surprisingly well with the holes in their traffic.

At length it becomes clear: there is a large blockage of some kind right where that major social media outlet sits. It’s having secondary effects on your other traffic, but it’s clear that the primary shadow comes from this (formerly very reflective) medium.

As you look and listen, and sift through the chaff, you finally grasp what’s happening: your signal, and the signal of selected people like you is being attenuated, and it’s not being done by some fuzzy “algorithm” that impersonally regulates your exposure by tracking “trends” and applying “ratings” based on computed “interest” within the community. Or something like that.

Yes, you are being profiled and your traffic is being systematically deflected away from the people who would normally see it. People who “follow” your signal are simply not getting normal updates of your signal, so they don’t read it, so they don’t respond. So they don’t see the ads. So revenue falls off, into a kind of shadow of its own.

If you’re doing this simply to share information with people who are interested, then the effect is that your communication is being cut.

If you’re doing this because you’re being paid by advertisers, then your revenue just got cut.

Cutting communication is an oppressive thing. If this major social media outlet (MSMO) has no effective competition — making them an effective monopoly — this amounts to blatant censorship.

What can you do? You can complain to the people running the MSMO. Yeah, that’s not working. They’ve already preemptively claimed it’s not happening.

So who ya gonna believe? The honest, trustworthy people casting shadows in your signals, or your lying eyes?

Once you’ve realized that the machinery of an effective monopoly has been “tuned” to interfere with your signal, what do you do? Where do you go?

Well, as always, people with money seek power, people with power seek money, and people with both seek control. The “equal-and-opposite-reaction” to this sort of thing is that those made of sterner stuff than the average social lamb look for alternatives and, not finding them, sometimes start their own.

For example, there’s a new kid in town in the social media space, and their tagline is “no censorship.” There’s a write-up on them. Have a peek: http://observer.com/2017/05/minds-open-sourced-social-media-facebook-competitor/

https://www.minds.com/ — I signed up there this evening. Kind of an exploratory thing.

I’ve heard of others, and I’m tracking them down, too.

I’ve also toyed with the idea of starting my own service aimed at folks who are just plumb tired of being alternately spied on and spammed at. I know there’s a market. All I have to do is confirm that I have a hundred thousand or so interested people, willing to throw a buck at the idea. Low tech. Low bandwidth. Low exposure. Under the RADAR.

Who knows, maybe there can be a way to send out your signal without having someone cast shadows in your transmission.

I contend that, once we wake up and turn our backs on the Soylent Green of social media monopolies (you are the product, you are bought and sold), we can engage in unencumbered signal.