California is ripping off her mask and coming out of the red closet. They passed a bill last week that would no longer make it a firing offense for being a communist. We’ve known forever that the entire state is rife with commies… at least now, they’ve made it nice and legal to be one. You can still be fired for being part of a group that seeks to overthrow the government by force or violence, but who are we kidding? They are all for anyone seeking to remove President Trump. Considering Berkeley is ground zero for Antifa, you get my point.

The few and proud Republicans in the state are offended by this bill introduced by commies in the Bay Area. It goes against everything that is American, but then again… California isn’t exactly ‘American’ anymore, now is it? It is now officially a one-party Sanctuary State that is bankrupt and threatening the US government, the President of the United States and the rest of the nation. They have destroyed businesses and lives, while protecting criminals and communists. The comrades of California unite to destroy freedom in the America. The problem isn’t what McCarthy did… it’s what he didn’t finish. Isn’t that the real issue here? Da, comrade. 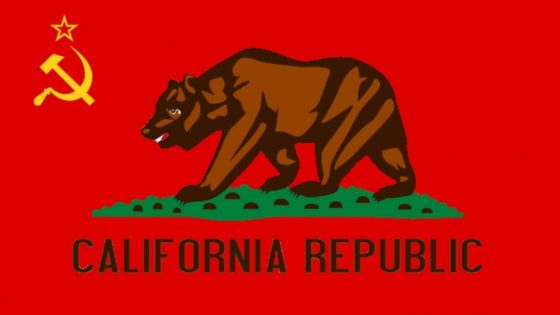 From The Sacramento Bee:

Being a communist would no longer be a fireable offense for California government employees under a bill passed Monday by the state Assembly.

Lawmakers narrowly approved the bill to repeal part of a law enacted during the Red Scare of the 1940s and ’50s when fear that communists were trying to infiltrate and overthrow the U.S. government was rampant. The bill now goes to the Senate.

It would eliminate part of the law that allows public employees to be fired for being a member of the Communist Party.

Employees could still be fired for being members of organizations they know advocate for overthrowing the government by force or violence.

Some Assembly Republicans said the Cold War-era law should not be changed.

Assemblyman Randy Voepel, a Southern California Republican who fought in the Vietnam War, said communists in North Korea and China are “still a threat.”

“This bill is blatantly offensive to all Californians,” said Assemblyman Travis Allen, a Republican who represents a coastal district in Southern California. “Communism stands for everything that the United States stands against.”

They laughingly call this the elimination of Cold War-era language as if words are the problem and not communists. The Cold War never ended… it shifted. Assemblyman Rob Bonta, D-Alameda, introduced his bill before facing opposition from Assemblyman Travis Allen, R-Huntington Beach. Guess who won? They repealed part of a law enacted during the Red Scare of the 1940s and ’50s when there was widespread fear that communists were trying to infiltrate and overthrow the U.S. government. Except that fear was justified and communists have now infected and infiltrated every nook and cranny of our society. Just look around. It isn’t the Red Scare anymore, it’s the Red Reality.

Next stop for the bill is the Senate where it is expected to pass easily. Assemblyman Voepel is right… the communists of Russia, China and North Korea are still very much a threat and are woven into our society. They are our enemies and they are among us. Most government agencies and schools are rife with them. The communists are currently winning the fight and Americans better wake up to the fact that they are being subjected to a coup from within and fast. The communists are more emboldened each passing day.