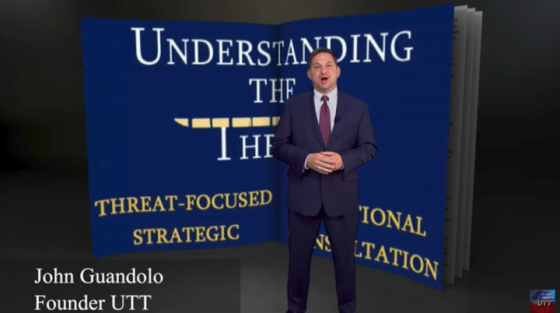 “There are thousands of organizations whose stated objective, if they’re Muslim Brotherhood, is to wage civilization jihad in order to impose Islamic State here.”

He says that he conservatively estimates that “well over seventy percent” of the “over 3000 mosques, Islamic centers in the United States right now,” belong to “the Muslim Brotherhood’s network.” During the interview, Guandolo explained:

“…the 2008 Holy Land Foundation trial that was adjudicated in Dallas, Texas was the culmination of a 15-year FBI investigation—it was the largest terrorism financing and Hamas trial in American history ever successfully prosecuted—and it revealed that the prominent Islamic organizations in the United States are a part of a movement led by the U.S. Muslim Brotherhood to establish an Islamic state under Sharia, the same objective as ISIS and Al Qaeda.”

While the case yielded “hundreds of unindicted coconspirators” Guandolo said that plans to indict “the leader of the Council on American Islamic Relations, Omar Ahmad, and CAIR itself” never came to fruition because Eric Holder “shut that down and we have not prosecuted anyone else since HLF was convicted…”

Guandolo sharply criticized the media’s failure to alert the public to the terror threat posed by the Muslim Brotherhood’s network. Asked why the media do not regularly report this information or even cover it at all, he replied:

He also said reporters’ laziness is a significant problem, noting that he has asked “At least a hundred journalists just in the last few years” whether they have ever researched Sharia or the Holy Land Foundation, and they have replied that they have never read about those issues.

Guandolo believes that journalists should face prosecution in some cases:

“If you can demonstrate that they have been provided the facts and they know and they continue to report and defend a terrorist group, yes, I would argue legally…that is material support of terrorism.”

Questioned about academia, Guandolo said that, “…most of our supposed great universities are havens for socialist thought…” He stated that, “the biggest problems in this war are academics who, in my personal opinion, seem to have lost the ability to reason and logically think through problems.”

The Muslim Students Association (MSA) founded in 1963 was “the very first national Islamic organization in America” according to Guandolo who explained that it “was created also by the Muslim Brotherhood cuz Hamas is an inherent part of the Muslim brotherhood.”

Currently the MSA has about 800 chapters on campuses across the country. Guandolo also said that, “Americans for Palestine, AFP, is a Hamas front now on college campuses and there are new ones popping up all the time. It’s a very pro-Hamas, pro-Sharia movement going on, on college campuses right now.”

Sharia requires Muslims to wage jihad, “until the entire world is under Islamic rule,” Guandolo stated. He said that according to Islamic teaching, “…Islam is a complete way of life: social, cultural, military, political and religious all governed by Islamic law, and all Islamic law, as I just said, obliges jihad and jihad is only legally defined in Islamic law as warfare against non-Muslims.”

Islamic doctrine teaches Muslims to lie when deception is deemed necessary to accomplish “obligatory” objectives and because jihad and the creation of a caliphate under Sharia are obligatory objectives, Guandolo explained:

“So what we need to understand is the way you know an Islamic leader is lying is when he’s talking to you, when his mouth is moving.”

This license to lie makes it very difficult for the U.S. government to implement effective vetting procedures and Guandolo said America should “…stop putting Muslims in positions of responsibility until we find a way to…vet them, and I’m not sure we’re gonna find it, but you cannot put people in the positions—especially given the now 15-year history since 9/11—where so many of these people put into sensitive positions have turned out to be bad guys.”

He said “It’s the majority of the people that our government is working with, the vast majority, are batting for the other team. I mean you’d have to work to find someone that’s not—that’s a problem.”

According to Guandolo, America fails to win the war on terror because the U.S. government takes advice from the enemy:

“When we can demonstrate that one hundred percent of the advisors—Islamic advisors at the Pentagon, the White House, the FBI, the CIA—are Muslim Brothers or…part of the Muslim sisterhood, but primarily Muslim Brothers, and those are the people that we’ve relied on to advise us on how to fight the war, both overseas and domestically our counterterrorism strategy, that would explain why we’re getting thrown all over the map and why we’ve been getting…the floor mopped up with us for the last 15 years.”

Guandolo believes the United States government should label the Muslim Brotherhood a terrorist organization and pursue indictments based on information from the Holy Land Foundation trial.

You can listen to my entire interview with John Guandolo on “The Alex Nitzberg Show:” Marxists are working overtime to take over the Maine Democratic Party, from Congressional to local level. Since its founding in June 2016, Maine Democratic Socialists of America, the Portland-based local of this country’s largest crypto-communist organization, have become a significant force in Pine Tree State politics. Now, another Maine DSAer, Joey Brunelle, is running for Portland City Council  as a “progressive.” At the grassroots level, Maine DSA has effectively conquered the state’s most influential Democratic Party club, the Cumberland County Democrats. Maine has long been a blue state, but never a socialist state. I’ll bet most Maine Democrats have no idea that their party is being hijacked by Neo-Marxists, socialists and outright communists.

There is nothing “Democratic” about Democratic Socialists of America.