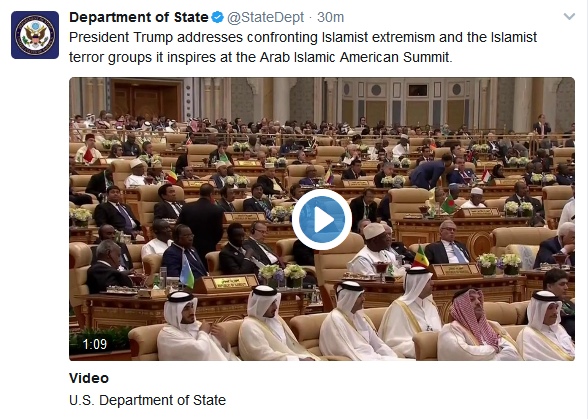 And what does this say? Click to see the featured tweet/clip.

President Trump’s speech before the Arab Islamic American Summit in Riyadh, Saudi Arabia, Sunday did specifically condemn what he has before called “radical Islamic terrorism,” despite what we have heard from reporters and pundits for days. That he did not choose to string those words together in that order is simply beside the point.

Consider the following. Very clearly, he was speaking to Muslims about Muslims, that is, believers in Islam. Further, he directly condemned the “extremism,” or the “radicalization,” or “fanatical” interpretation of their ideology and the “terrorism” concomitant with it. So, there you have it. In the following excerpts, emphasis is added to make the point. 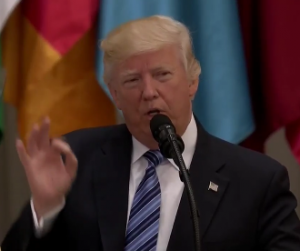 Trump began to draw the lines early in the address, “But in sheer numbers, the deadliest toll has been exacted on the innocent people of Arab, Muslim, and Middle-Eastern nations. They have born the brunt of the killings and the worst of the destruction in this wave of fanatical violence.”

But what fanaticism and violence did Trump describe? Very soon he specified: “The true toll of ISIS, Al Qaeda, Hezbollah, Hamas, and so many others, must be counted not only in the number of dead. It also must be counted in generations of vanished dreams.” Later in the speech, he added Iran and its ally/puppet, Syria to the litany. What major strand do these terrorist entities have in common, but Islam?

Further quotations from the president, spelling out what all in the know realize he has addressed as “radical Islamic terrorism”:

Every time a terrorist murders an innocent person, and falsely invokes the name of God, it should be an insult to every person of faith. Terrorists do not worship God, they worship death.

If we do not act against this organized terror, then we know what will happen. Terrorism’s devastation of life will continue to spread. Peaceful societies will become engulfed by violence. And the futures of many generations will be sadly squandered.

Starving terrorists of their territory, of their funding, and the false allure of their craven ideology will be the basis for easily defeating [them].

But you can only unlock this future if the citizens of the Middle-East are freed from extremism, terror, and violence.

Will we be indifferent in the presence of evil? Will we protect our citizens from its violent ideology? Will we let its venom spread through our societies? Will we let it destroy the most holy sites on earth? If we do not confront this deadly terror, we know what the future will bring: more suffering, more death, and more despair. But if we act, if we leave this magnificent room unified and determined to do what it takes to destroy the terror that threatens the world, then there is no limit to the great future our citizens will have.

Semantically, it should also be noted that where Trump spoke of this violent form of Islam (commonly singled out as political and violent Islamism, or Jihadism) free of the word “radical,” he lays the issue more squarely at the feet of any and all Muslims, not less so, letting them sort through the crisis. When a sect presents a radical version, after all, it means to offer to change something at its root. But Trump at times let the roots simply lay wherever they may be found.

Since there are many passages in the Quran which call for violence, since its eschatological promise and aim is violent, and since Muslims are commanded to emulate the (extortive and violent) life of Mohamed, it is only right to express humanity’s concerns of Islamic violence, whether divergent or central, and whether episodic or systematic, to all Muslims.

Transcript of the address | Video: 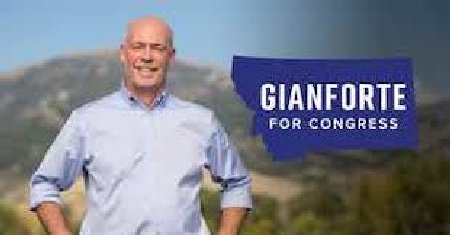 Mary has fallen in love with the Prairie dogs running around everywhere with their cute babies following them. I told her to forget about it. We are not taking Prairie dogs home on the plane to add to our 8 birds, two cats and greyhound.

Democrats have spent millions flooding the airways with ads lying about the Republican candidate Greg Gianforte. These people are despicable. Meanwhile, their candidate, Quist is nothing more than another Pelosi hand puppet to help fake news media’s impeach Trump scheme.

Mary and I stuffed envelopes for two hours yesterday. CCC is sending bumper sticks and letters to Montana Republicans urging them to get to the polls on Thursday, May 25th.

Mary ordered the 3 ft by 8 ft “GIANFORTE FOR CONGRESS” banner she and I hold on street corners during our CCC team’s numerous sign waving sessions. Response from Montana motorists honking their horns have been overwhelmingly in favor of Gianforte.

Folks, I am talkin’ old school, grassroots, do everything you can think of to push your candidate over the finish line campaigning. While it is grueling, Mary and I enjoy working with our CCC team, making a difference for our country.

The Bible says faith without works is dead. In other words, while we should pray for God’s blessing, it is crucial that we work toward what we want; putting legs to our faith.

The theme of our Montana get-out-the-vote effort is “All that is needed for evil to prosper is for good men to do nothing.”

Republicans outnumber Democrats in Montana. But if they don’t vote, we are toast! Please call your Uncle Joe or whomever you know in Montana and tell them to get to the polls THIS THURSDAY! http://bit.ly/2rhjfL7

I always try to taste the most popular local dish. Chicken fried steak is high on the list; flour battered and deep fried; placed on a bed of mashed potatoes and smothered in gravy. Sounds awesome. For health reasons, I ate a bit of cooked medium/plus rib eye. Delicious!