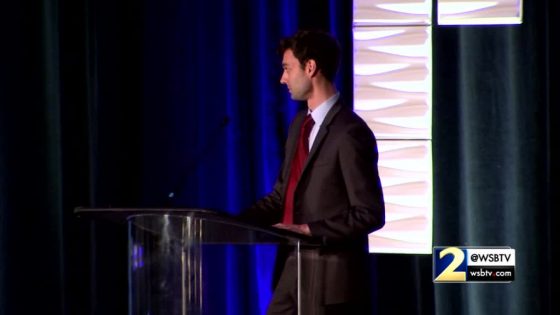 The Georgia Trump-resistance candidate Jon Ossoff is leading in the polls against Republican Karen Handel in the June 20th congressional special election. A Facebook patriot sister in Georgia gave me a heads up that guys wearing pink Planned Parenthood shirts were in her neighborhood putting Ossoff literature on doorknobs.

Losing every special election, Democrats are desperate to energize their fake America-regrets-electing-Trump narrative. Leftists continue to pour millions into the Georgia race, putting all their hate-Trump eggs into Ossoff’s basket. http://washex.am/2qthSoc

In typical Democrat bait-and-switch fashion, Ossoff is running as a moderate. In reality, Ossoff is an extreme far left radical, backed by off-beat anti-America groups from Occupy Wall Street to Black Lives Matter and numerous other counter-culture weirdo groups; rabidly obsessed with bringing down Trump. http://bit.ly/2r7vGqk

Isn’t the whole idea of Democrats boldly launching a Trump-resistance movement pretty outrageous? Remember the media firestorm over Rush Limbaugh saying he hoped Obama’s agenda failed? http://bit.ly/2qpqZa6 Leftists practically demanded that Rush be removed from the air and crucified in the public square, stabbed through the heart with his golden EIB microphone. Rush was excoriated for being a traitor to his country.

And yet, fake news media is orchestrating and praising the Trump-resistance movement as on the moral high ground. These people on the Left who are consumed with out-of-control rage over Hillary losing the election do not give a rat’s derriere about their blatant hypocrisy.

Speaking of Hillary, she’s back! Hillary hit the airways spewing more anti-Trump bitterness to keep the flames of hate, rage and insanity burning in her minions. http://bit.ly/2r8IT4f My fellow patriot Americans, we must remain extremely vigilant in our efforts to keep these Leftist wackos out of power. I still scratch my head, puzzled over what Leftists feel they must so passionately resist from Trump’s presidency.

Why is Trump proclaiming his desire to “make America great again” as repulsive to Leftists as showing Dracula the cross? If you are a Leftist, wouldn’t you still want your country, your homeland to be made great? These people are simply not right in the head folks.

The Left has gone totally insane. Cable news has become 24/7 destruction of Trump. It is as if nothing in the world matters other than removing Trump from office.

On Fox News, Bill Bennett noted how fake news media was far more outraged over the Montana Republican candidate tussling with a reporter than they were over the 22 people killed in the Manchester terrorist attack and 26 Coptic Christians murdered in Egypt. Fake news media’s passion and interest is only in events which further its Trump-must-be-removed narrative. Clearly, they have lost their minds, obsessed beyond reason.

A majority of Americans, 65%, believe the media publishes fake news. http://bit.ly/2rqZIbM In a Montana store, I overheard an employee expressing her support of Trump to another employee. She said she believes nothing reported in the media.

Fake news media have thrown all pretense of being fair and balanced out the window. They are in full-court-press remove Trump mode. My bottom line is it is us against them, folks. Thanks and may God bless you for your faithful support of our efforts. http://bit.ly/2r8IT4f I’ll report in again from Georgia.