This article has been cross-posted from Bombthrowers.

Bonta’s Bill was intended to amend an existing statute for removing a public employee who “is knowingly a member of the Communist party,” or a member of an organization that “advocates the overthrow of the Government of the United States or of any state by force or violence.”

Bill 22 would have allowed communists to work legally in the California government.

On May 10, the bill passed the Assembly and was headed for a rubber stamp Senate vote, but with the support of her district, often referred to as “Little Saigon,” Nguyen launched a petition to oppose the legislation.

Claiming that his bill didn’t “endorse communism or encourage communism,” Bonta maintained that he was protecting “people’s rights” and “following constitutional precedents that made it illegal for a government to fire employees due to their political affiliations.”

On May 18, after intense pressure from Nguyen and Assemblyman Travis Allen who called it “blatantly offensive to all Californians,” Bonta withdrew the Bill and apologized to US military veterans and refugees from the Vietnamese communist regime.

Rep. Rob Bonta should not get off the hook so lightly. Far from protecting innocent political activists from government overreach, Rep. Bonta was much more likely protecting serious security risks from legal consequences for their subversive activities.

It turns out that Assemblyman Rob Bonta has close personal and family ties to a network of activists with histories of “advocating the overthrow of the Government of the United States or of any state by force or violence.”

These activists were never members of the old pro-Soviet Communist Party USA, but were members of the even more radical Katipunan ng Mga Demokratikong Pilipino, commonly known as the KDP or Union of Democratic Filipinos. This organization advocated the forceful overthrow of both the United States and Philippines governments. Many former KDP activists continue to network with each other and other communist organizations, and many hold influential California government jobs to this day. Rob Bonta’s mother Cynthia Bonta, was a very active member of the KDP and both mother and son remain close to many ex-KDP comrades.

Until recently, Rob Bonta served on the board of Filipino Advocates for Justice, under former KDP member and Cynthia Bonta’s long time comrade Lillian Galedo.

Rob Bonta wrote on Facebook in April 2017, that he is “so proud to honor Filipino Advocates for Justice on the well-earned retirement of their incredible executive director Lillian Galedo after 37 years. You are my friend and all of our inspiration!” 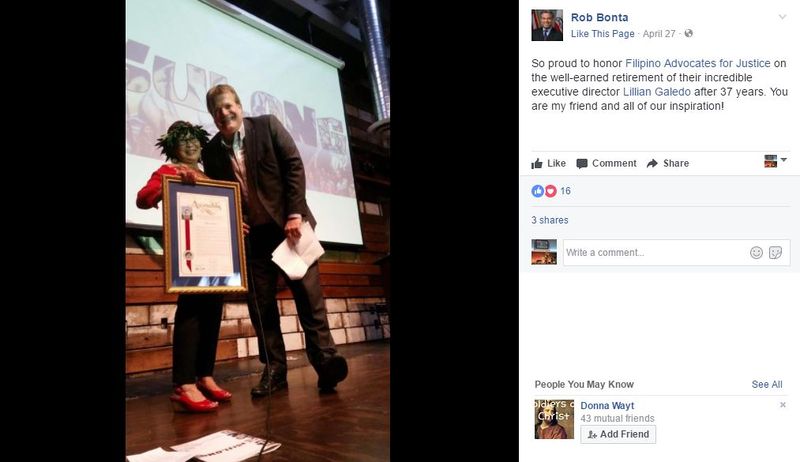 Founded in 1973, in a retreat in the Santa Cruz mountains, the KDP “was a nationwide collection of Fil-Ams and Filipino immigrants who were involved in community organizing around social justice issues in the US and democratic nationalism in the Philippines. They openly supported the Communist Party of the Philippines and the New People’s Army.”

KDP was founded as a response to President Ferdinand Marcos’ martial law crackdown on a growing insurgency mounted by the Maoist Communist Party of the Philippines and its military wing, New People’s Army. Philippine Communists work with Americans for Revolution in Both Countries

Among the KDP’s founders were radical Filipino-Americans, as well as movement veterans from the Philippines. In the spring of 1970, a series of mass protests in Manila, known as the First Quarter Storm, threatened to topple President Ferdinand Marcos. The movement was brutally suppressed by the military, prompting many anxious parents to send their activist children to sanctuary in the United States.

Many of these young expatriates continued with their political work by joining the KDP, providing to their American comrades direct ties to the Communist Party of the Philippines and the underground New People’s Army.

Cynthia Maglaya immigrated to the United States in 1970 and settled in the San Francisco Bay Area. Maglaya had been a student leader in the Kabataang Makabayan, a Communist Party of the Philippines-controlled student organization prominent during the First Quarter Storm. Before leaving the Philippines, she was charged with building support for the Philippine revolution in the US.

Cynthia Maglaya would later become one of the three main founders and national leaders of the KDP.

Many US-born KDP leaders traveled to the Philippines to work with the underground. Some were arrested, but as American citizens, received comparatively lenient treatment, usually a short stint in jail, followed by deportation.

Circa 1980, the KDP merged with the Line of March, a re-grouping of many strands of the fractured US Maoist movement. While part of Line of March, the KDP continued to operate as a semi-autonomous entity.

After 1982, the KDP lost many of its ties to the Philippines underground and shifted its focus to the American revolution. The KDP completely submerged into Line of March after the 1986 death of Philippines President Ferdinand Marcos. The Impact of the KDP is Felt Today

In 1990/91, the Line of March folded with many ex-members moving into the Democratic Party, where many of them still continue to operate. For example several ex KDP/Line of March activists, including Florante Ibanez and Rose Ibanez, David Kimbrough and Carol Ojeda-Kimbrough held a Grassroots Fundraiser on May 28, 2010, in Los Angeles to help elect Karen Bass to the US Congress. Rep. Bass had very close ties to Line of March through the early 1980s.

Many ex-KDP and Line of March activists still network extensively in California and Washington. They are still very influential in Los Angeles and especially the Bay Area where local government is heavily infiltrated by former Maoists from Line of March, Communist Workers Party, the League for Revolutionary Struggle and the still highly active Freedom Road Socialist Organization.

Rob Bonta’s successful 2012 campaign got a big boost with the endorsement of Wilma Chan, an Alameda County Board of Supervisors member and former California State Assembly Majority Leader (2002–2004). Chan was a former leader of the League for Revolutionary Struggle.

Many former KDP activists hold government, or quasi-government jobs in California. Given that the organization was never more than 300 strong, it is likely that Rob and Cynthia Bonta know most, if not all of them personally.

We can safely assume that most consider it their revolutionary duty to use their government posts to advance socialism at every possible opportunity.

Rob Bonta’s Bill was of more than symbolic importance. It would have made it easier and safer for Californian revolutionaries to use their taxpayer funded positions to destroy the freedoms of the very people who pay their (usually very generous) salaries.

In 2013, Bonta introduced legislation that would require California public schools to teach students the contributions of Filipino Americans in the farm labor movement. It was signed into law in October of that same year by Governor Brown. As most prominent Californian Filipino labor leaders, such as Philip Veracruz, Fernando Gapasin, Larry Itliong or Cynthia Bonta, they were revolutionaries of some stripe, it is easy to see the potential for communist propaganda in this measure.

Assemblyman Bonta is doing the communists’ dirty work for them.  He should be publicly held to account for his communist sympathies, his lies and subterfuge.