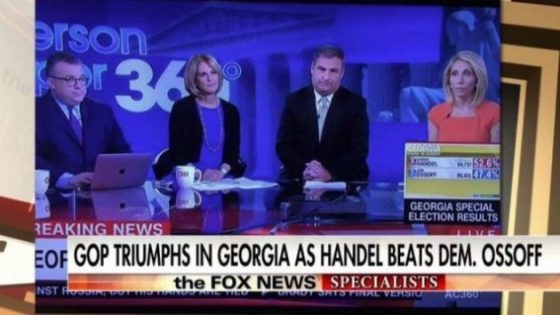 Did the Russians hack the Georgia election? Leftists are all over media creating straw-men to disguise the simple truth that voter’s have rejected their treasonous Trump resistance movement. Jon Ossoff losing in Georgia is the 5th election Democrats have lost since Trump’s shocking crashing defeat of Hillary. Losing the Georgia race has to be particularly painful because once again, Leftists lied to themselves and their base that Ossoff would surely win just like they did with Hillary.

My question is how crazy will Democrats’ official Resistance Summer domestic terrorism become after their devastating loss in Georgia? Thus far, Leftists have mock beheaded Trump; mock put a bullet in his head; mock stabbed Trump, dreamed of beating Trump with a golf club; talked about blowing up the WH, physically attacked Trump voters; kidnapped/tortured a Trump supporter and gunned down Republicans while practicing for a charity baseball game.

Leftists are disappointed, desperate, deranged and overflowing with hatred for our president and his supporters; an extremely dangerous mix of emotions. How much lower will Leftists take their depravity and violence?

My fellow Americans, I wish to express my deep heartfelt thanks for your help stopping Jon Ossoff, “Nasty” Pelosi’s latest anti-Trump minion. A handful of Hollywood Leftists spent mega-millions to help their Great Leftist Hope candidate win the Georgia congressional seat. Ossoff could not vote for himself because he does not live in the 6th district. Masters of deception, Democrats pretended their national Leftist push for Ossoff represented the thinking of Georgia voters. They lied.

My wife Mary and I spent months in Georgia with the Conservative Campaign Committee in their boots-on-the-ground effort to inspire Georgia voters to “drop the remote and vote.” We ran radio ads on major stations, conducted numerous sign waving sessions at busy intersections, sent out mailers, organized phone-from-phone, produced videos and tons of social media. We left no stones un-turned to get votes for Republican Karen Handel.

Brothers and sisters who love America, we cannot let up. Rest assured, Leftists will triple down on their insane efforts to remove our president. We must stay engaged. Republicans must continue to vote in large numbers, not taking any of the upcoming races for granted. Again, thanks for you help carrying Karen Handel across the finish line. God bless.

The second quarter is almost over. The largest capitalized momentum technology growth companies have greatly outperformed during this period, albeit there has been considerable volatility during the past two weeks. As the quarter concludes, earnings may become the predominate variable for market direction.

According to Bloomberg, value stocks are now expected to see stronger profit expansion than growth stocks, or companies viewed as having high potential for share appreciation based upon the perception that superior earnings growth will last forever.

It is because of this belief of superior earnings growth to infinity and beyond that is why many of the momentum technology growth issues are trading at earnings considerably higher as compared to the market as well as to their historical basis.

By definition, value stocks are cheaper than their growth peers, a price divergence that has become even more acute during the last two months.

If the above materializes—value stocks earnings grow at a greater pace than growth stocks — there could be a massive transition in the immediacy, a transition amplified by the dearth of ownership of value shares and the gargantuan ownership of the mega size technology growth.

Is this what the volatility of the last two weeks is suggesting?

Many years ago, a very well-known investor commented “the most obvious conclusions are those which are ignored.”

As noted many times, mega size momentum technology growth issues have greatly outperformed almost every other vehicle. The ownership in the five largest names is at historical proportions. If the above scenario materializes, perhaps the phrase “the most obvious conclusion was ignored” did occur.

Commenting on yesterday’s market activity, most markets were relatively quiet.