For those who know me well, there are two presidents that I loved more than all the others. The first is Calvin Coolidge. The second is Ronald Reagan who idolized Coolidge. A new book has come out that I highly recommend that is written by Henry Olsen, entitled: The Working Class Republican – Ronald Reagan And The Return Of Blue-Collar Conservatism. President Reagan changed my life and made me a staunch constitutional conservative. So of course, this book intrigued me.

In this book, Olsen takes a controversial stand that Roosevelt’s New Deal was more conservative than anyone knew. The book promotes that Ronald Reagan was the natural heir to the New Deal. Now, I personally don’t agree with that, but I find Olsen’s argument very interesting. I think you will too. Some of the things that Olsen puts forth are correct. Reagan appealed to both Democrats and Republicans because he used common sense, truth and passion to get his points across. And when he was elected, he had a clear plan, kept his promises and got things done. He worked within the government, not against it to accomplish his agenda. He was monstrously successful at it too. 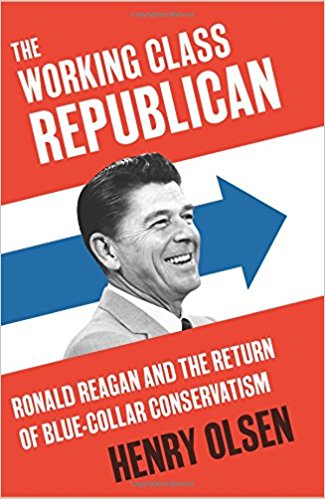 In this sure to be controversial book in the vein of The Forgotten Man, a political analyst argues that conservative icon Ronald Reagan was not an enemy of Franklin Delano Roosevelt and the New Deal, but his true heir and the popular program’s ultimate savior.

Conventional political wisdom views the two most consequential presidents of the twentieth-century—FDR and Ronald Reagan—as ideological opposites. FDR is hailed as the champion of big-government progressivism manifested in the New Deal. Reagan is seen as the crusader for conservatism dedicated to small government and free markets. But Henry Olsen argues that this assumption is wrong.

In The Working Class Republican, Olsen contends that the historical record clearly shows that Franklin Roosevelt and the New Deal itself were more conservative than either Democrats or Republicans believe, and that Ronald Reagan was more progressive than most contemporary Republicans understand. Olsen cuts through political mythology to set the record straight, revealing how Reagan—a longtime Democrat until FDR’s successors lost his vision in the 1960s—saw himself as FDR’s natural heir, carrying forward the basic promises of the New Deal: that every American deserves comfort, dignity, and respect provided they work to the best of their ability.

Olsen corrects faulty assumptions driving today’s politics. Conservative Republican political victories over the last thirty years have not been a rejection of the New Deal’s promises, he demonstrates, but rather a representation of the electorate’s desire for their success—which Americans see as fulfilling the vision of the nation’s founding. For the good of all citizens and the GOP, he implores Republicans to once again become a party of “FDR Conservatives”—to rediscover and support the basic elements of FDR (and Reagan’s) vision.

Henry Olsen is a senior fellow at the Ethics and Public Policy Center. A former president of the Commonwealth Foundation, he has also served in senior leadership roles at the Manhattan Institute and American Enterprise Institute. Olsen earned his B.A. from Claremont McKenna College and J.D. from the University of Chicago. This is a brilliant and thoughtful man. And one that would be fascinating to debate points with.

The book draws parallels between the Trump presidency and Reagan’s. Perhaps there are some, but for the most part, I don’t see them. Trump did mimic Reagan to some extent, but their styles and methodology are as different as night and day. Olsen applies to American politics what he terms the “truckers and cashiers” test. Truck driving is the biggest employer of white, working-class men, and being a cashier or waitress is the most common blue-collar job for white, working-class women. For Reagan, “virtually every speech had this person in mind, and virtually every speech had something that person could uniquely relate to.” Trump does this to some extent as well, but not nearly as effectively. He is attempting to work within the government framework somewhat, but not to the extent or the manner that Ronald Reagan did.

Read the book and decide for yourself if there is indeed a connection between FDR and Reagan. It’s a fascinating conclusion that deserves considering. But in the end… personally I feel Reagan was the disciple far more of Coolidge than he was of FDR. Pick up a copy of Olsen’s fascinating book here.