Is it okay for a Senator serving on the Foreign Relations Committee to employ an aide who is a member of the Communist Party USA? What could be the security implications of such a relationship?

Maxwell Goldman started as a Field Organizer for Chris Murphy for U.S. Senate, in April 2012, and continued employment until at least September 2016, when he worked as a Senior Outreach Assistant from Senator Murphy’s Hartford, Connecticut office.

He then left briefly to serve as Field Director for Friends of Elizabeth Esty, until November 2016.

Goldman earned a philosophy degree from Tufts University in 2010. At Tufts he was a leader of the far left Jumbo Janitor Alliance, which had close ties to several Massachusetts state politicians including to then state Rep. Carl Sciortino and state Sen. Pat Jehlen.

After college, Goldman worked as Field Organizer for Dan Malloy for Governor, followed by a stint with the heavily Communist Party USA-influenced Connecticut SEIU.

In June 2014 (while employed by Senator Murphy), Maxwell Goldman served as a Connecticut delegate to the Communist Party USA National Convention in Chicago. Maxwell Goldman of CT teaching a mini-workshop during the convention

To allay any doubts, here’s a closeup of Maxwell Goldman’s conference lanyard: 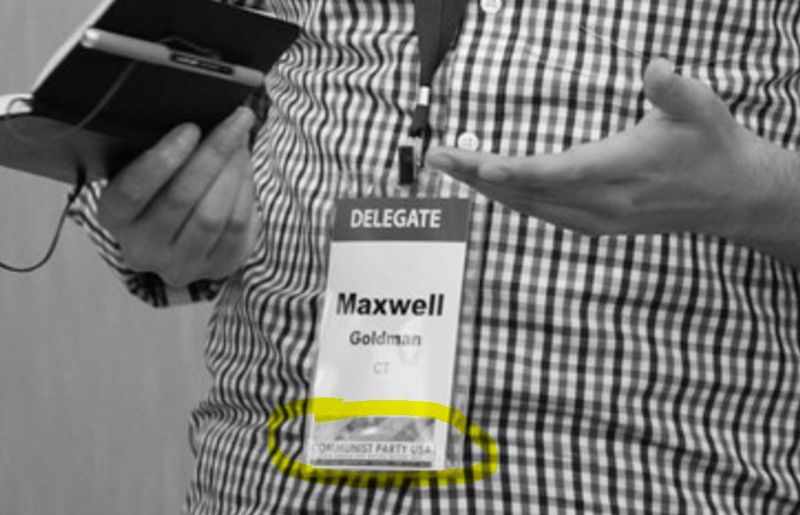 As a “progressive”  member of the Senate Foreign Relations Committee, Senator Murphy would be a prime target for “influence operations” by hostile foreign intelligence services.

The  Communist Party USA has close ties to the Communist parties of the Russian Federation, China, Cuba, Vietnam, Iraq and Iran. All have mounted hostile intelligence operations against this country.

At the 2014 Communist Party conference, Maxwell Goldman had ample opportunity to mix with representatives of some of these parties. Does anyone believe that Maxwell Goldman’s status as an aide to a member of the Senate Foreign Relations Committee would not have been of interest to such people? As a member of the Connecticut branch of the Communist Party USA, Maxwell Goldman serves with some very well-connected people.

Connecticut Party Chair Joelle Fishman is chair of the Party’s Political Action Committee, which works closely with the Democratic Party. She is also the daughter-in-law of Roosevelt-era Soviet spy ring leader Victor Perlo.

Connecticut communist Lisa Bergmann gave a report on behalf of the Young Communist League to a gathering of the communist controlled World Federation of Democratic Youth, Lisbon, Portugal, 2011. WFTY, incidentally, is to host a major international communist youth festival in Sochi this coming October – on Vladimir Putin’s personal instructions.

Another comrade, Al Marder, is an official with the still existing World Peace Council – once the most important of the former Soviet Union’s many international front groups.

In June 2015, Marder celebrated the defeat of Nazi Germany in Moscow, where he had the honor of meeting the Communist Party of the Russian Federation leader Gennady Zyuganov. Unfortunately, there are few if any background security checks for Congressional or Senate staffers these days. Pretty much everything is taken on trust.

Could America’s enemies possibly be aware of this situation? Might they just possibly try to exploit it?

By employing Alex Goldman, Senator Murphy has turned himself into a security risk. He and Maxwell Goldman need to be investigated as soon as possible to determine what, if any, security breaches may have occurred.