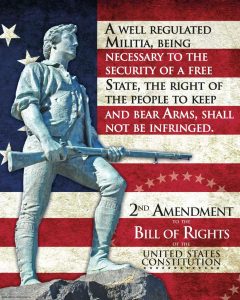 Some are touting the federal Concealed Carry Reciprocity Act of 2017 (HR 38) as a bill which would expand our right to carry.  But if you will walk with me for a few minutes, I’ll show you a better path to take.

Let us look at the applicable First Principles, to which I propose we return.

1. Gun control is not an enumerated power delegated to the federal government

Our federal Constitution doesn’t delegate to the federal government any power over the Country at Large 2 to restrict our arms.  Accordingly, all pretended federal laws, regulations, orders, opinions, or treaties which purport to do so are unconstitutional as outside the scope of powers delegated.  They are also unconstitutional as in violation of the Second Amendment.

The only power the federal government has over the Country at Large respecting arms is set forth at Article I, §8, clause 16 with respect to providing for the “organizing, arming, and disciplining, the Militia”.   Pursuant to this clause, Congress passed the Militia Act of 1792 which required every able-bodied male citizen (with a few exceptions) between the ages of 18 and 45 to acquire a rifle, bayonet, ammo, ammo pouch, and report to his local Militia Unit for training. 3

2. What does your State Constitution say about the right to keep and bear arms?

Each State has its own Constitution which addresses its State Militia and the right to be armed.

Now listen: No State may lawfully make any law which contradicts its State Constitution or which interferes with Congress’ power to “organize, arm, and discipline, the Militia”.

It sets up a complex federal regulatory scheme over firearms, every word of which is unconstitutional as outside the scope of powers delegated, and as in violation of the Second Amendment.

HR 38 proposes to amend this existing federal regulatory scheme to insert a new provision [to be § 926 D] to require States which have a statute which permits residents of their State to apply for a permit [!] to carry a concealed firearm

to allow persons from other States:

to possess or carry a concealed handgun (other than a machine gun or “destructive device”) which has been shipped or transported in interstate or foreign commerce.

So! Even though a State Constitution, such as that for Connecticut, 4 prohibits the State Legislature from making ANY laws restricting firearms (such as imposing requirements for registration, a permit, government issued photo ID), a Citizen of Connecticut who exercises his constitutionally recognized right to carry without registration or a permit or a government issued photo ID, wouldn’t qualify under HR 38 for concealed carry in another State.

Do you see how a God-given right [self-defense] is thus converted into a privilege which is regulated, granted, or denied, by civil government?

HR 38 also provides that any person carrying a concealed handgun in a State under the reciprocity provisions may also carry concealed in the public parts of National Parks and certain other lands under federal control.  Lest you think this a gain, consider that:  (1) The Constitution doesn’t authorize the federal government to operate national parks and such like, and (2) the federal government has no lawful authority to impose registration requirements for carrying arms anywhere!

Read our Declaration of Independence and federal Constitution. Then you won’t fall for unconstitutional gimmicks like HR 38.

The gun rights organizations could perform valuable services to our Country by working for:

1 From the late Attorney Richard D. Fry’s email of Dec. 10, 2015 to US Senator Moran, a co-sponsor of SB 498, the Constitutional Concealed Carry Reciprocity Act of 2015.  Richard, who was my Friend, sent me a copy of his letter.

2  Pursuant to Article I, § 8, next to last clause, Congress has general legislative powers over the District of Columbia, military bases, dock yards, mints, federal courthouses and post offices, and such other places needed for Congress to exercise its enumerated powers.  The exercise of such powers by Congress over these small federal enclaves is restricted by the Bill of Rights – including the 2nd Amendment. So Congress is prohibited from making, for these federal enclaves, any laws which infringe the Right of The People to keep and bear Arms.  Congress may properly require individuals visiting federal prisons, the psych ward of military hospitals, the mint, federal courthouses, and such like, to leave their arms in their vehicles.  But Congress may not require Citizens to obtain and carry a permit or photo ID as a condition precedent to carrying a firearm.

3 The “Militia of the several States” were creatures of State Statutes – not of the federal government.  Dr. Edwin Vieira’s short video shows how the State Militia were replaced by the federally controlled National Guard.

4 The Constitution of the State of Connecticut says at Article I:  “SEC. 15. Every citizen has a right to bear arms in defense of himself and the state.”

5 See A SERIOUS QUESTION FOR THE NRA, by Dr. Edwin Vieira, re revitalization of the Militia of the several States.  Dr. Vieira’s mind is a delight.