For our 40th wedding anniversary, Mary and I have been experiencing the grandeur and majestic beauty of God’s creation in Alaska. Did you know bald eagles are brown for 5 or 6 years before their head turns white? I was surprised by Alaska’s bountiful foliage and multicolored flowers. From towering glaciers to skies, mountains and seas painted in gorgeous blues by God, we saw numerous breathtaking beautiful scenes. In 1867, Secretary of State William H. Seward purchased our 49th state for only $7.2 million. It was a Trump-of-a-great-deal. Critics called the deal “Seward’s folly.”

In our cabin, I was jolted back to ugly reality by MSNBC, one of the three available TV news channels. Folks, I continue to be amazed by the level of hate that MSNBC has for Trump and their commitment to removing him from office.

Further blowing my beauty of Alaska high was a press conference in which despicable human being Maxine Waters announced democrats’ plan to impeach Trump for criminal activities. There is not a shred of evidence supporting Waters’ accusations. Watching Maxine Waters stand at the podium lying through her teeth about all of Trump’s supposed crimes was disgusting. Waters and her democrat minions are horrible enemies of the American people and must never be voted back into power again.

Trump has been totally awesome; fulfilling campaign promises and moving the ball forward towards making America great again. In only six months, Trump has dramatically chipped away much of Obama’s mountain of regulatory overreaches http://nws.mx/2vbT3Rr ; created jobs http://bit.ly/2k5thrN; opted us out of an anti-American climate deal http://cnb.cx/2qHbSZh and restored power back to states and We the People. http://bit.ly/2ux7UIh

Democrats/Leftists are out of their minds with rage, desperate to stop Trump’s swift and steady dismantling of Obama’s legacy of government tyranny.

This is why the democrats and fake news media tag team continue the relentless promotion of their absurd lie that Trump used Russia to steal the election. 1. It is impossible for Russia to tamper with our vote counting. 2. Fake news media either under-reported Hillary’s multiple crimes and breaches of national security or told us they were no big deal. Fake news media thought it had successfully protected Hillary and duped voters, confident she would win in a landslide.

Hillary lost because she was a cold calculating tired old hippie wicked witch Leftist who said it was okay to abort a baby moments before birth. Thank God, this vile woman is not seated in that powerful chair in our Oval Office.

Maxine Waters’ and her minions demanding that Trump be impeached is equivalent to throwing crap against the wall, hoping it will stick. For the Leftists’ impeachment scheme to work, they must destroy Trump’s popularity. Fake news media’s strategy is to flood the airways with empty accusations of criminal activity. They throw character assassination grenades at Trump 24/7. Fake news media bombards us with reports of supposed nationwide protests. Fake news media manipulate polls to create the illusion that Trump’s appeal is sinking. http://bit.ly/2vvYIky Fake news media is doing everything in its power to sell their lie that Americans regret voting for Trump.

A standard practice of democrats and fake news media is to brand anyone who dares oppose their extreme socialist/progressive agenda a racist, stupid, corrupt or crazy. Leftists claim Trump is obviously crazy and must be impeached. So, because Trump is functioning like a savvy businessman rather that an impotent Republican, Leftists say he must be crazy. Sadly, we cannot count on wimpy Republicans to have our president’s back.

My fellow patriotic Americans, We the People are Trump’s firewall; the only thing blocking Waters’ and her minion’s impeachment crap from sticking. The good news is Waters and her homeys are clueless regarding our rock-solid connection with Trump and why he won our votes in an electoral landslide.

Leftists laughed, mocked and underestimated Ronald Reagan. Fortunately, they are repeating their mistake with Trump as he continues to kick their butts under their upturned noses.

During Trump’s run for the WH, I recorded a parody of the O’Jays’ “Love Train” titled, “Trump Train”. http://bit.ly/2nILInB Folks, it is extremely crucial that we who elected our president stay firmly seated aboard the Trump Train.

By: Brian McNicoll | Accuracy in Media 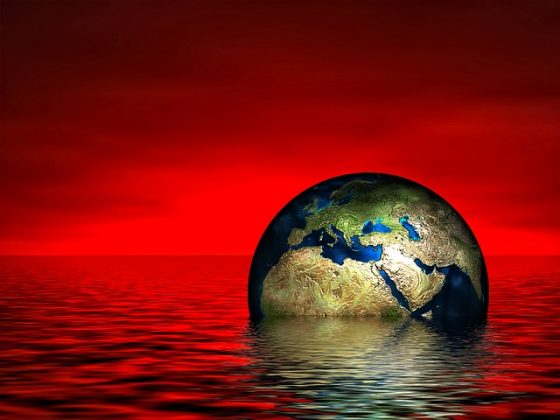 It was 46 years ago, almost to the day, that the Washington Post ran a story on how man’s behavior was affecting his environment.

“In the next 50 years fine dust that humans discharge into the atmosphere by burning fossil fuel will screen out so much of the sun’s rays that the Earth’s average temperature could fall by six degrees,” the Post reported. “Sustained emissions over five to 10 years could be sufficient to trigger an ice age.”

But long before the shelf life of the Post’s prediction began to run out with no Ice Age in sight, the newspaper changed course and decided burning fossil fuel would make the weather hotter, not colder. It makes one wonder – Is the Post trying to deliver serious scientific information? Or does it just view pot shots at the energy industry as a way to sell papers?

The question came up again on Monday, when the Post carried a story in its Metro section entitled, “Timeline of sea-rise impacts is predicted.”

The story devotes more than 1,000 words to a report released last week by the Union of Concerned Scientists entitled, “When Rising Seas Hit Home: Hard Choices Ahead for Hundreds of U.S. Coastal Communities.”

The Post story begins, “On Maryland’s Eastern Shore, rising seawater levels and chronic flooding threaten to disrupt daily life, damage homes and businesses, and swallow land in the relatively near future, according to a new study. For some parts of the Eastern Shore, there soon may be no more there there.”

The Eastern Shore is the part of Maryland on the eastern side of the Chesapeake Bay, across from Baltimore, Annapolis and the rest of the state. It is flat and exposed and always and forever subject to periodic flooding and storms – as are all areas near the sea.

The Union of Concerned Scientists’ ploy with this report was to attempt to put a date on when various calamities would occur or begin to unfold. “What is different in this report is the estimates of how soon this could happen,” the Post intones. “In 20 years, the landscape will be noticeably different. In 80 years, dramatically so.”

The town of Crisfield, Md., could lose half its landscape in the next 20 years, the report says, and Ocean City could find itself facing a similar fate by 2060.

The Post story then outlines a number of ways Maryland already is spending public money to combat this. “Sea level rise is what the state has been preparing for,” Catherine McCall, director of coastal planning in the state’s Department of Natural Resources office, said.

Only sea level rise is one area climate scientists have traditionally outkicked their coverage. Sea levels have risen about 8 inches since reliable records began to be kept in the 1880s and even worst-case scenarios from the areas thought most to be in the crosshairs predict only a 15-inch increase by the end of this century.

What it is is a survey of literature by others similarly conflicted by receiving grants from people who want to control the lives and livelihoods of others by invoking “science” and scare tactics about future environmental “disasters.”

Like a lot of things on the left, the Union of Concerned Scientists benefits a lot from its name. One pictures white lab coats hung side-by-side as far as the eye can see at its conventions. But anyone with $25 can become a member of the union and a concerned scientist. It is nothing but another left-wing advocacy group – that began by protesting the U.S. research community was doing too much to help the military.

It has railed against nuclear power, President Reagan’s Strategic Defense Initiative and the Vietnam War. Its luminaries have included Noam Chomsky and Carl Sagan. It unleashed a pressure campaign against General Electric when the company donated $325 to the libertarian Reason magazine as part of a program in which it matched funds its employees donated to charity. It did this even though General Electric donated more than $497,000 that year to environmentally conscious organizations.

It also has been a leader in efforts by state attorneys general in New York and elsewhere to attempt to use the RICO Law, which was intended to catch drug kingpins, against ExxonMobil for what it claims is a campaign of deception by the energy company concerning global warming.

The organization is funded by reliably left foundations. It pursues a reliably leftist bent in its policy initiatives. It publishes “analyses” based on the writings of reliably left political apparatchiks so long as those writings hew the company line.

Left-wing policy organizations are, of course, free to operate as they choose and advocate for what they want. But when a newspaper that purports to report on truth as opposed to political spin presents that report as truth on which public spending decisions should be made, it forfeits its role as an advocate for the public and embraces one as an advocate for left-wing politics as usual.

Who pays the price? The taxpayers who, based on these “analyses” and media’s uncritical acceptance of their conclusions, are forced to spend enormous sums of money defeating a problem that may well not even exist.