Texas Republican Congressman Will Hurd is a former CIA officer, and serves on the House Intelligence Committee, investigating Russian interference in the last elections. I don’t agree with him everything he says, but he’s got Russia nailed.

From a CNN interview with Mark Preston

Hurd: Russia is our adversary. They are not our ally. The Russians, Vladimir Putin is very clear, he has one goal and that’s to re-establish the territorial integrity of the USSR. And he can’t do it militarily, he can’t do it economically, he has to use asymmetrical warfare and that means eroding the trust in democratic institutions. That’s the US That’s the EU. That’s NATO. And one of the issues, one of the ways that they do this is with disinformation or … covert influence operations. Which means we, the United States, have to have a counter-covert influence strategy, which we don’t have.

Preston: So you brought up Russia … I trust, as you have said, in these folks in the intelligence community [who say Russia tried to interfere in the US elections]. Is it frustrating when you don’t hear the White House really give a full-throated response behind that?

Hurd: I stand behind the intelligence community assessment of this as well. The Russians were trying to manipulate our elections. Now, did they impact the vote tallying machines? No. So, President Trump won the election fair and square, but that doesn’t change the fact that there was attempts of manipulation. The Russians have been doing this for decades in Europe, they’re doing it now and they are going to continue to do that. … I think it is frustrating when we allow the Russians to continue to win, and what do I mean by that? The Russians’ goal in their activity was to sow, was to drive a wedge, whether real or perceived, between the President, the intelligence community, and the American people. And by the discord that continues, that allows those goals to continue to be achieved.

In defending President Trump we must take care not to defend Putin or Russia. We should support the hardest possible line against the Putin regime.

Russia is America’s and President Trump’s number one enemy. 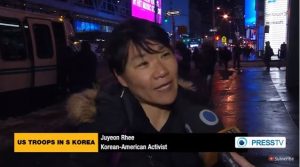 Juyeon Rhee is one of most militant North Korea supporters in the United States. An immigrant from South Korea, Rhee served as the Program Coordinator of Education and Exposure Programs at New York based Nodutdol and has helped to organize annual delegations of US subversives to both North and South Korea since 2002.

Juyeon Rhee “was blocked from boarding a plane at LaGuardia Airport in New York City on the morning of June 22 2017” as she was on her way to protest the U.S. THAAD missile defense system from South Korea.

“Delegation coordinator Juyeon Rhee of the Task Force to Stop THAAD in Korea and End Militarism in Asia and the Pacific was blocked from boarding a plane at LaGuardia Airport in New York City on the morning of June 22 [2017]. A protest campaign to demand that her travel ban be lifted is currently underway, with hundreds of organizations and individuals sending letters of protest to Moon Jae-In and the Blue House, including prominent peace activists like Nobel Peace Laureate, Mairead Maguire; Academy Award-winning director, Oliver Stone; and American author and Pulitzer Prize winner, Alice Walker.

Rhee was also forbidden to enter her home country in 2016, when the South Korean government blocked the entry of Juyeon Rhee and Hyun Lee, into South Korea. The two were representatives of the U.S.-based Solidarity Committee for Democracy and Peace in Korea. They had traveled to South Korea to participate in the annual Jeju Peace March as well as join protests against the recent U.S.-South Korean decision to deploy the Terminal High Altitude Area Defense (THAAD) missile defense system in South Korea.

After being detained by immigration officers at Incheon International Airport, Rhee and Lee were deported pursuant to Articles 11 and 12 of the Korea Immigration Control Act, which prohibits the entry of foreigners who, among other things, are “deemed likely to commit any act detrimental to national interests of the Republic of Korea or public safety.” 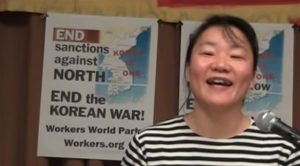 According to a sympathetic press release;

Rhee and Lee had traveled to South Korea numerous times in the past and encountered no barrier to entry. They have never broken any laws in South Korea, much less been deported in the past.”

The denial of their entry can only be seen as an attempt by the Park Geun-hye administration to block peace activists from internationalizing the growing opposition in South Korea against THAAD deployment. Since announcing its decision to collaborate with the U.S. military to deploy the missile system in Seongju, North Gyeongsang Province, the government has waged an aggressive campaign to crack down on all those who oppose the government’s decision. President Park recently referred to those voicing opposition, many of whom are ordinary Seongju residents, as “subversive forces” and declared, “It’s important to block subversive forces from all affairs, and we must be thorough in weeding them out.”

In March 2013, Juyeon Rhee spoke to a New York gathering of the pro-North Korea Workers World Party on the “DPRK Crisis.”

As of March, 2013, Juyeon Rhee served as a board member of the Los Angeles based Korea Policy Institute, the most influential pro-North Korea front organization in the country.