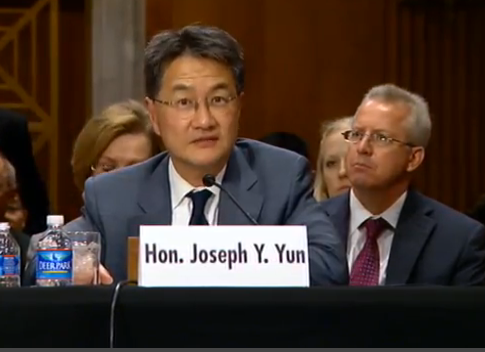 His name is Joseph Yun, a U.S. diplomat at the United Nations, one that the North Korean regime has reached out to more than once. Most recently it was over the return of Otto Warmbier and his release.

Under the Obama administration, all talks were terminated during the time Sweden was the communications envoy of record. With the transfer of power and government to Donald Trump, Pyongyang opened up the back channel via the United Nations to Joseph Yun, who has long diplomatic experience in the region.

While preparations are in place according to President Trump should Kim launch his 4 missiles toward Guam, Pentagon Chief Mattis declares the United States and allies are ready. That still leaves North Korea with nuclear weapons, a condition every expert is omitting in talking points. Secretary of State Tillerson says his work is to get North Korea to stop with the missile program and that will not likely occur as it is a proxy operation of Iran.

The Kim regime is keeping his estimated 60 nuclear weapons for a bargaining tool and global legitimacy. That is the real problem. Many experts declare that North Korea always backs down in the end when they get food or sanctions relief, but we are dealing with a new Kim that is far more unpredictable than his father.

So, what can the U.S. and allies do going forward? Shall we continue to rely on China? They are anything but a friend or a cooperative partner stating in local Chinese news that China will remain neutral should Kim strike first. Further, China declared that if the United States went to a preemptive posture, China would stop us.

China has total ownership and power in the region and certainly when it comes to navigation, so any U.S. naval activity angers them.

The United States has other options and tools, where not one, but a combination of all, may also be deployed. That includes forcing a regime change, not always the best solution. Then there is the special forces deployment to covertly enter North Korea and work on a detonation of key command and control sites. Special operations has trained for this kind of operation for more than 20 years.

There is a cyber option, a tool that several experts declare has already been used so that Kim’s missiles miss targets or fail on re-entry.

Dealing with China to control North Korea is a fool’s errand as Russia and Iran are part of the total equation. There could still be wider consequences when the United States and allies prevail over North Korea on the missile side, again the nuclear inventory remains and is traded to other rogue nations such as Iran or Syria.

There are other allies included in the variables regarding North Korea. They include Australia, Japan and Britain, where Canada, Germany and France remain silent. Japan has just deployed a missile defense system in a defensive mode.

The media continues to declare that any military conflict will lead to millions dying. That is only true if North Korea is successful on a land based conflict hitting Seoul. The U.S. uses only precision guided munitions where collateral damage would not affect other regions of North Korea, hence millions would not escape across the Yalu river into China. China has a standing army at that border preventing such an event.

China and North Korea want the peninsula to be unified and under Chinese control which is much the case concerning the waterways in dispute along with the contested islands. China fears that the United States is working to unify the peninsula under S. Korean control, which has not been an objective.

In summary, while fear for days has been the media headlines, it cannot be fully dismissed that a near term conflict will likely be resolved, leaving North Korea with a viable nuclear weapons and missile program. The coordination between Iran and North Korea will continue in that same realm and Trump is left with the same festering issue of previous presidents.

Will there be a Chinese naval blockade if the United State and allies go for a preemptive strike? Perhaps that New York Channel to Pyongyang has the burden of finding out. Has someone sent an envoy to Tehran yet with these discussions? Nah… Russia meanwhile is keeping a keen eye on all of it.

Will the war of words escalate into violence? As noted yesterday, nervousness is rising, albeit the response from the markets has been relatively subdued. To reiterate the obvious, the outcome of any military action is infinite.

Radically changing topics, the war on inequality is raging with one side dogmatically stating higher taxes will solve all fiscal issues. Economics 101 dictates the higher the price, the lower the demand. What I find difficult to comprehend is that the CBO and all other legislative budgeting authorities utilize linear projection models.

For example, the city of Philadelphia enacted a soda tax on January 1. The budgeting office projected demand will remain unchanged, generating about $92 million in additional taxes. To date, according to Philadelphia, only $39.4 million in taxes have been collected. Pepsi reported a 43% decline in sales and is subsequently firing 100 workers because of lack of demand. Two days ago, Philadelphia revised the estimates of the soda tax down 14% to about $79 million, but this amount seems too optimistic.

And then there is NYC. Mayor de Blasio is proposing to increase taxes on cigarettes to the highest level in the country to deter smoking.

The combined state and local tax would now be 13.2%. Only California has a higher rate at 13.3%. The top 1% of wage earners already account for 49.3% of NYC tax revenue, suggesting a very narrow tax base.

In my view, de Blasio’s thinking is not consistent. Via the proposed cigarette tax, he understands the more something is taxed, the lower the demand.

According to the census department, during 2014 — the last year that there is information — New York led the nation in outmigration of those making $200,000 or more a year. Will such a “millionaire tax” accelerate the outmigration patterns?

Oh, in for what it is worth department, $250 million will be earmarked to pay for half price train fare for 800,000 low income New Yorkers. Moreover, payroll for NYC’s subway workers has surged over 26% in the last six years.

In my view, government has yet to comprehend the importance of tax rates and economic activity. It is obvious that de Blasio connects the two with cigarette taxes and demand. Why can’t he acknowledge it with income tax rates?

In several weeks, Congress will return from its summer recess where tax reform is expected to be debated.

Many times I have opined that often times the most obvious conclusions are those which are ignored.

Returning to the here and now, equity markets were modestly lower, following increased rhetoric by both the US and North Korea. The NASDAQ fell about 2.15% while the Dow declined about 0.9%.

Oil fell following this by about 2%, perhaps on technology driven profit taking as crude which was up over 1% earlier in the day. Treasuries were modestly higher in price with the 10-year rising 13/32 and 30-year rising 29/32.

The Dow should open nervously lower. The 10-year is unchanged at 2.20%.