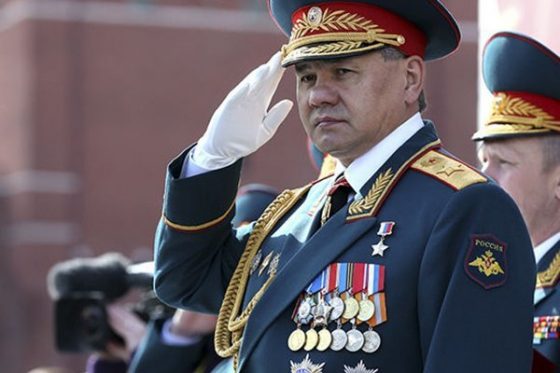 And Venezuela needs the money, too bad Maduro capitulated on oil rights for power.

Sergey has many successes on his resume, all of which make him a possible candidate for President. Here are some:

– Russia’s military success in Crimea, East Ukraine, Syria, South Ossetia, Chechnya, and down the border of NATO countries, Sergey and Russia were viewed as force well protected that can show effectiveness and efficiency in military actions

– Shoigu was minister in the Ministry of emergency situations for almost 22 years. During that time, he efficiently used the advantages of Russian bureaucracy and legalism to gather power and popularity, all while not making a single enemy

– Sergey showed pragmatic approach in addressing former American defense secretary Chuck Hagel with his personal name, not with his surname, which was practice before

Since 2013, Russia and Moscow were heavily criticized for spending large amounts of money on armed forces. Many Western leaders thought that Putin is the man pulling the strings, and that it was his idea to spend so much money, despite his weak economy that is too much oil-dependent. However, what few people outside of Russia knew until lately is that Sergey Shoigu, the Russian defense minister is the one responsible for the huge expansion. More here.

In April of this year, Maduro’s Defense Minister paid an interesting visit to Moscow. Vladimir Padrino Lopez the Defense Minister, would meet his Russian counterpart, Sergey Kuzhugetovich Shoygu, at a conference on international defense.

“I have come (to Moscow) upon the orders of President Nicolás Maduro,” Padrino said in the video. He added: “I bring a very interesting, a very important point (to the conference), which is NATO’s projection in Latin America, its consequences and risks.”

Beyond the excuse of the conference, why is Maduro’s Defense Minister, the man who “pulls the strings of power behind the scenes” in Venezuela according to García Otero, visiting Moscow precisely when massive citizen protests are posing an existential threat to the Chavista regime? The answer may have to do with what is perhaps the least analyzed aspect of the Venezuelan crisis: the geostrategic implications of a failed state in Venezuela from the point of view of the world’s great powers.

There certainly has been a shift in Washington’s attitude toward the Venezuelan regime since Donald Trump arrived at the White House. As the PanAm Post explained in 2016, the Obama administration carried out a three-pronged strategy in Latin America, its aims being:

Yes, there is some indication that NATO may begin cultivating members nations in Latin America, Putin is on the move using Iran, Cuba and Venezuela. Now you know why Vice President Pence is on a tour in Latin America.

When President Trump mentioned just a few days ago about a military option in Venezuela, he had something in mind due to the above meetings and building Russian influence in the region. Beginning in Columbia, Pence discussions began this way: 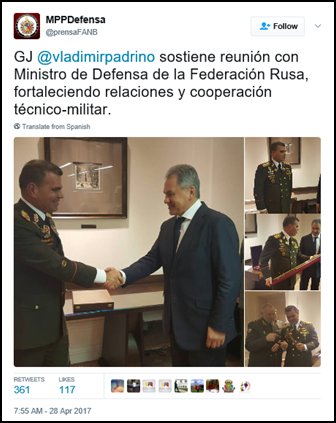 Colombia is one of the United States’ closest allies in the Western Hemisphere, yet, as he stood next to Pence, Santos denounced Trump’s threat of military action, and told the visiting vice president that such a possibility “shouldn’t even be considered” and would be “unacceptable.”

“Every country in Latin America would not favor any form of military intervention, and that is why we are saying we are intent on looking into other measures, some of which are already underway and others to be implemented in the future,” Santos said.

The concerns build as Maduro’s Vice President, El Aissami, has deep ties to Hezbollah of Iran and he was responsible for those tens of thousands of passports illegally issued for Syrians. Of course Putin is running Assad of Syria with the aid of Iran. Weapons abound globally. Vladimir Padrino Lopez is the mastermind and driver of the region.

The ideology of Venezuela’s minister of defense, Vladimir Padrino López, is captured in a 2015 photo of him kneeling before Fidel Castro. But he is reputed to be even closer to the Kremlin. This January, Venezuela launched a series of civil-military exercises around the country, dubbed Plan Zamora, under the guidance of advisers from Iran, Russia and Cuba.

Russia supplies arms to Venezuela. In November the Kremlin sent new aviation and air-defense technology to Caracas. Reuters reported in May that Venezuela now has “5,000 Russian-made MANPADS surface-to-air weapons,” representing “the largest known stockpile in Latin America.” More here from the WSJ.

For a comprehensive timeline and names, go here… excellent work going back to 2015 investigating the Russian, Cuban, Iranian and Venezuelan operation.